For the last few days we’ve been beyond busy, and things aren’t going to slow down anytime soon. In fact, it’s about to get a lot busier!

Yesterday we had several errands to run, including a stop at RV Parts Nation to have Trina order us a new Splendide washer/dryer combo. But as it turns out, they are on backorder everywhere including, Camping World. After making a few calls to suppliers, Trina said she might be able to get one some time in mid-June. Maybe.

Then Trina suggested another unit, the Pinnacle Supercombo, but I’ve never heard of it and can’t find much information about them online. Does anyone have any experience with one of these units? If we had room we’d go with separate stackable units. But to do that would require a major remodel to make them fit.

Our next stop was Sam’s Club to buy plastic CD cases for our 8-in-1 CD that includes all eight of our RVing guides. We’ve always purchased them there in the past, but yesterday we learned that they no longer carry them. It seems that we find Sam’s Club and Costco less and less useful all the time. We actually dropped our Costco membership when it came up for renewal a while back, and I think we’re going to do the same with Sam’s Club. We don’t buy prescriptions there and so much of what they have is in bulk quantities that we can’t use. And we have found that oftentimes we can find things just as cheap on Amazon and get free two day shipping with Prime.

We left Sam’s and went across the parking lot to Staples, where we found the CD cases for the same price we used to get them at Sam’s. Again, no bargain even if they would have had them in stock.

From there we drove over to the fairgrounds in Goshen to check things out for when we go in on Sunday for Escapade. We saw a bunch of people we know, got lots of hugs, and then drove through the vendor camping area, where we spotted Jim and Chris Guld of Geeks on Tour fame’s motorhome. The door was open so we stopped to say hello, and were amazed to see that Jim has lost over 60 pounds since the last time we saw them, and Chris had lost 20 (not that she needed to). Jim told us about their diet, but when he got to the part about no soda, no sweets, no fried food, and no ice cream, I stopped listening. I’d like to lose weight, but let’s not get all crazy about things. We had a very nice visit with the Geeks and are looking forward to spending more time with them at Escapade.

Back at Elkhart Campground, I stopped at the office to get a key for their multi-purpose building so I could check it out for the self-publishing workshop I want to put on after Escapade. Then we stopped at our motorhome just long enough to drop off the things we had purchased when we were out, then went with Charles and Chris Yust to dinner at a place called George’s Gyros.

We had never eaten there before, but we’ll definitely go back. Charles, Chris and Terry had gyro plates and said they were delicious. The portions were huge and they all had enough to take home for lunch today. I chose the rib tips plate, which was good but I think next time around I’ll order one of their hamburgers, which I hear are exceptional.

A few minutes after we got home, longtime friends and subscribers Dave and Thelma Middleton stopped in for a visit. It’s been a couple of years since we saw them, and it was a real treat to get to spend some time with them.

Don’t forget to sign up for this week’s Free Drawing. This week’s prize is an audiobook of Judy Howard’s Going Home With A Cat And A Ghost. All you have to do is click on the Free Drawing link and enter your name in the comments section at the bottom of that page (not this one). Only one entry per person per drawing please, and you must enter with your real name. To prevent spam or multiple entries, the names of cartoon or movie characters are not allowed. The winner will be drawn Sunday evening. 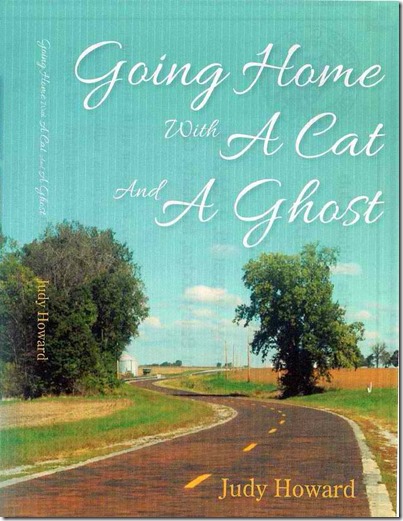 And speaking of good books by excellent authors, my friend Lee Hanson’s Swan Song is currently on sale on Amazon for just 99¢, with is $3 off the regular price. With 79 reviews and a 4.6 star rating, this second book in the Julie O’Hara mystery series is a fan favorite. But hurry, because it won’t be on sale long!

Thought For The Day – I’m a second hand vegetarian. Cows eat grass and I eat cows.

8 Responses to “Beyond Busy”