It always breaks my heart to see tears in my daughter Tiffany’s eyes when it’s time for us to leave. But she knows that we could never be happy staying in one place for very long, and we promised her and the girls that when we come back next year we will stay longer.

We pulled out of Tiffany’s driveway about 10:30 yesterday morning, after lots of hugs and kisses, and a few tears too. Here are Tiffany and Terry, my two favorite women in the whole world. 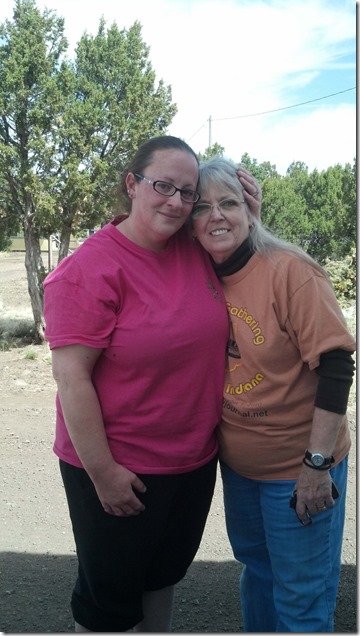 It was a beautiful day for traveling; blue sky with a few high clouds, and no wind. We took U.S. Highway 60 east about 50 miles to the state line and crossed into New Mexico. We been on this good two lane road many times and much prefer it over dodging the trucks and potholes on Interstate 40, which follows the same route a few miles further north. 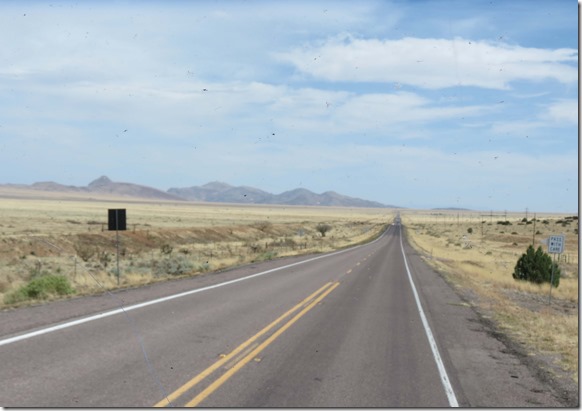 For more years than I can remember I’ve heard stories about the delicious pies they serve in the tiny village of Pie Town, New Mexico. But trust me, they’re a myth, just like Bigfoot and the Loch Ness Monster. We have stopped in Pie Town four or five times now, and the one time the famous Pie-O-Neer restaurant was even open, they told us that they had just sold the last slice of pie as we were walking in the door. Yeah, right, and that ripple in the water on the Scottish lake really is a giant sea serpent! 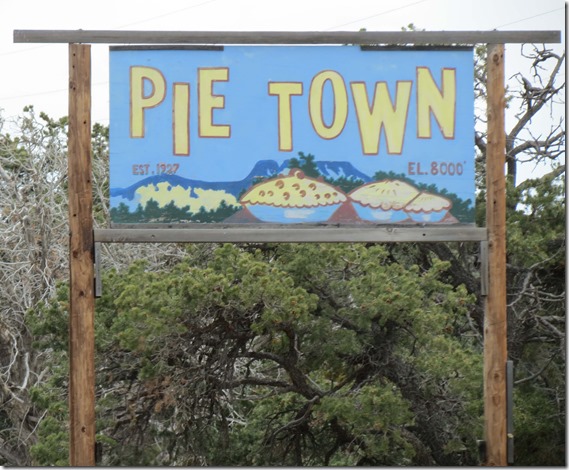 When we got to Pie Town about noon yesterday, the Pie-O-Neer was closed. Sasquatch was taking a nap in a rocking chair on the front porch, but roused himself long enough to tell me to try again the next time we’re in the area. Fool me once, shame on you. Fool me half a dozen times and I’ll just start eating donuts.

Somewhere along the way we spotted this collection of windmills. 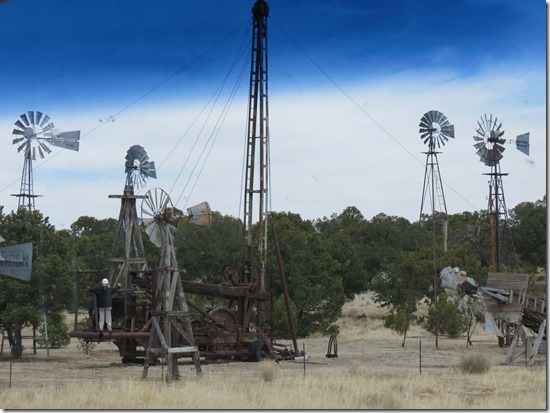 East of Pie Town U.S. 60 climbs to the top of the Continental Divide at an altitude of almost 8,000 feet and then drops down in a series of curves toward Socorro, a seedy looking town that I’ve never felt a need to stop in, so we drove through it to Interstate 25 and took it north 25 miles, where U.S. 60 broke off to the east again. 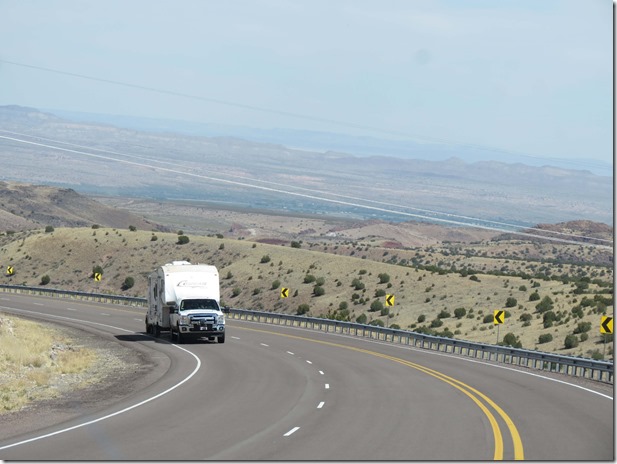 Climbing up to Mountainair, we spotted this neat mural, which made me think of my friend Tom Westerfield, who loves old trains. 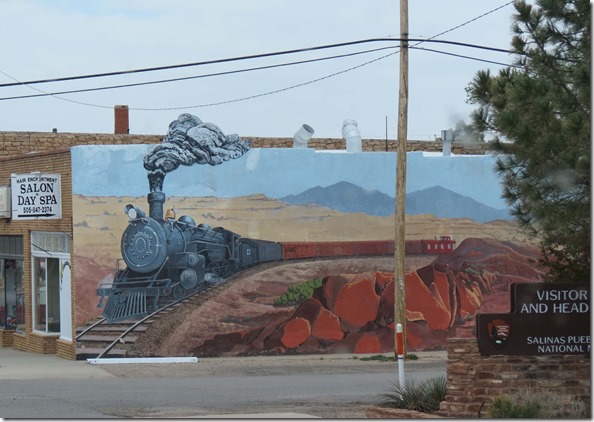 We passed through Mountainair, Willard and Encino, sad little towns with more empty buildings and ruins than people. 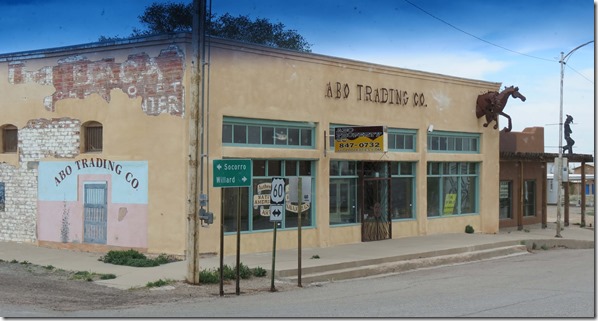 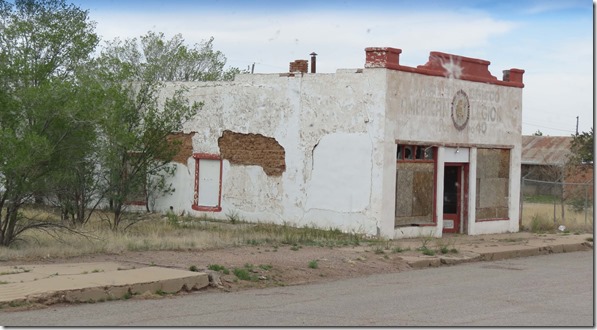 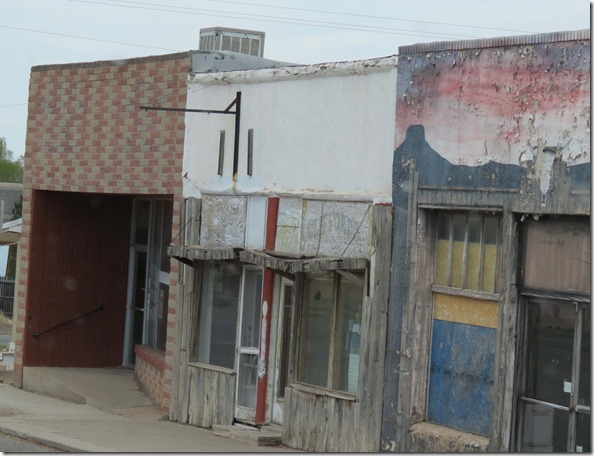 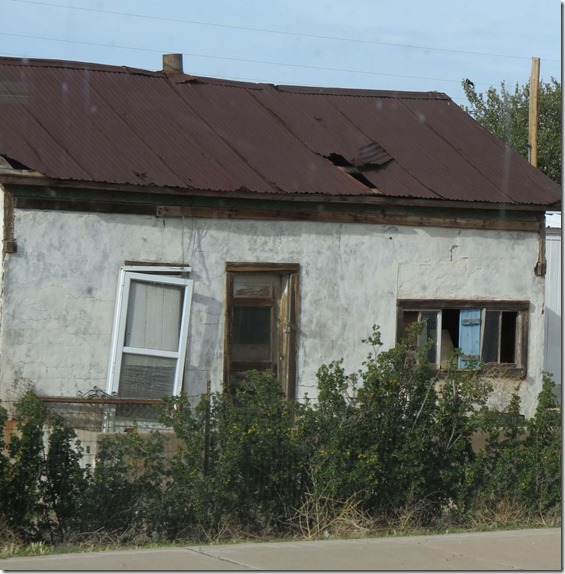 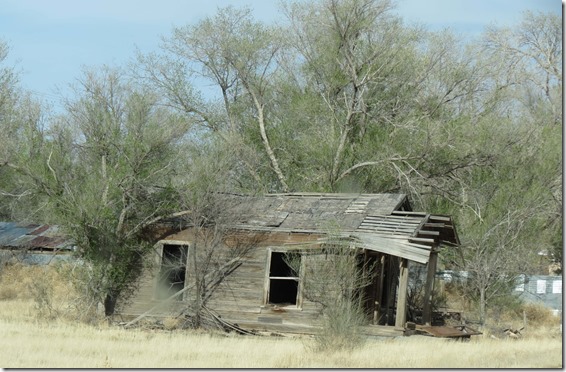 The plan was to spend the night in Fort Sumner, but two different blog readers who had been through there in the last week said that there was a lot of road construction between there and the Texas state line. So instead, at Vaughn we took U.S. 54 north 35 miles to Santa Rosa, where we hooked up with Interstate 40.

A few miles down the highway, traffic was routed into one lane past what was left of this eighteen wheeler. I don’t know what started the fire, but all that was left up front was the frame and motor of the truck. 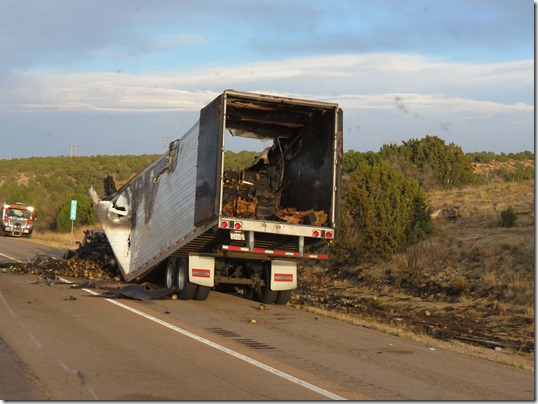 By the time we reached Tucumcari, the sun was low behind us, turning the mesas golden. We had put 416 miles behind us and were ready to get off the road. 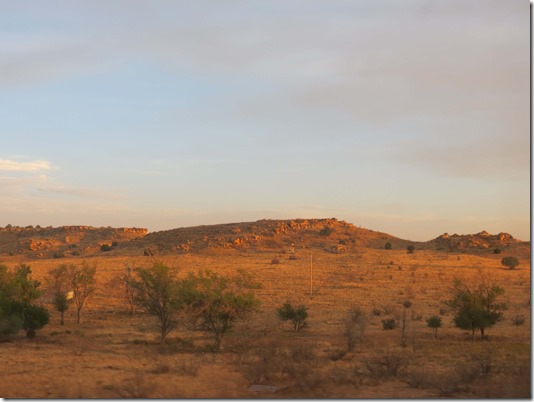 The Elks lodge here has pull through RV sites with 30 amp electric and water for $15 a night, and the second night is free. Hopefully we’ll make good time again today, although as I am posting this blog at midnight, the wind has come up and started rocking our motorhome. I hope it won’t interfere with our travel plans, we need to be in Elkhart, Indiana on Monday. At the rate we did our first day on the road, that should be a piece of cake.

, the fourth book in my Big Lake mystery series? All you have to do is click on the Free Drawing link and enter your name in the comments section at the bottom of that page (not this one). Only one entry per person per drawing please, and you must enter with your real name. To prevent spam or multiple entries, the names of cartoon or movie characters are not allowed. The winner will be drawn Sunday evening.

Thought For The Day – I always mean what I say, but I don’t always mean to say it out loud.