Nick's Blog » It Was A Good Day

We left Santa Fe RV Park in Apache Junction about 10:30 yesterday morning and had an easy run on two lane roads through Florence and Catalina, arriving at the Pima County Fairgrounds RV park in Tucson a little before 1 p.m.

We expected to have to settle for a 30 amp site, but lucked out and managed to snag the last 50 amp full hookup site they had. Since the price is the same, $20 a night or $100 a week, when the campground host asked if we wanted it I said sure, why not. My lucky day! And then I got to piss off a self-absorbed entitled A-hole in the process. It was a good day to be alive!

When the camp host took us to our site, we found that a yuppie type with a big 5th wheel, medium duty truck, and a car was our neighbor. Cool, I can tolerate just about anybody because I’m such a sweet guy, right? Well, maybe not.

The RV spaces are pretty tight here, and he had his truck parked in the site assigned to us. The camp host told him he needed to move it and he went off on her. He said there was no place else to park with his car there too, so what was he supposed to do? Actually it’s a HUGE fairgrounds and all he had to do was park it in the overflow area and walk maybe 25 or 30 yards back to his rig. Instead he chose to block a paid site and was mouthing off to the host because he felt he was entitled to do whatever he wanted.

He said, "Why can’t they park down there in one of the 30 amp sites?" Actually, I could have, and expected to until the host said she had a 50 amp available. But there was no way I was going to cave in to a jerk like that. I did suggest he could pay for the second site if he really wanted it. For some reason he didn’t like that idea. So he whined and sniveled some more and when he realized nobody cared, he finally moved his truck.

The truck is now parked in one of the 30 amp sites across from his rig. If I were the host I’d still make him move it to the designated area or pay for the extra site, but it’s not my battle to fight. What is it with people like that anyway? What makes them think they don’t have to play by the rules that the rest of the world does? Most RVers are really nice people, but every so often you run into this type. The good news is that they usually don’t last long in our lifestyle.

I prefer the many nice people we meet in our RV travels. When we pulled in yesterday there was an Eagle bus conversion ahead of us at registration with Washington license plates. Being an old bus guy myself, and because I had lived in Washington at one time, when we went into the office I struck up a conversation with the owners. As it turns out, they are Gypsy Journal subscribers Vic and Donna Crane, from Longview, Washington. I hope to get to visit with them for a few minutes while they’re here.

Another nice guy is my author friend Brandon Hale of Day Soldiers fame. Brandon is a talented fellow who is facing a terrible challenge right now. He was recently diagnosed with cancer, and his wife Laura also has serious health issues of her own. A friend has set up a fund to help cover the huge costs of the cancer treatment and living expenses until Brandon can get back on his feet and if you would like to help, even a buck or two is very much appreciated. I would consider it a personal favor if you would please consider helping this hardworking, deserving couple by logging onto http://www.gofundme.com/DonateToBrandonHale and making a donation. Here is a link to Brandon’s blog to give you some insight into the kind of guy he is. If you knew him, you’d call him a friend, too.

It’s Wednesday and that means it’s time to kick off a new Free Drawing. This week’s prize is an audiobook of Birdsongs, by my friend Jason Deas. It’s the first book in Jason’s excellent Benny James mystery series, a fast-paced tale centered on former FBI agent Benny James, who hoped to retire to a slower paced lifestyle on a houseboat but finds himself drawn into a murder investigation. All you have to do is click on the Free Drawing link and enter your name in the comments section at the bottom of that page (not this one). Only one entry per person per drawing please, and you must enter with your real name. To prevent spam or multiple entries, the names of cartoon or movie characters are not allowed. The winner will be drawn Sunday evening. 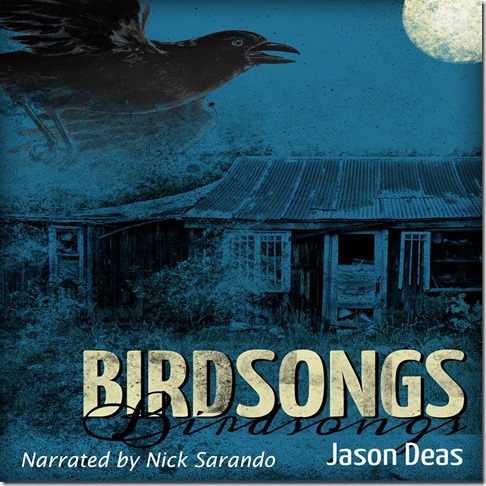 Thought For The Day – Live in such a way that you would not be ashamed to sell your parakeet to the town gossip. – Will Rogers

3 Responses to “It Was A Good Day”