One of the many internet myths going around is that if you are a veteran using the VA medical system for your healthcare, your doctor will ask if you are ever angry, depressed, or suicidal, and if you say yes, the government will cancel your concealed weapons permit (CCW) and confiscate your guns. I guess the fact the that CCW permits are issued by states, not the Feds, doesn’t matter because we all know that if it’s on the internet, it has to be true, right? Because they can’t put anything on there that isn’t.

I’ve been treated at VA hospitals in Pennsylvania, Kentucky, Florida, South Dakota, and Arizona and have never been asked any of those questions. However, when I went in for my routine annual exam this past week, the nurse taking my vitals did ask me if I was being abused by anyone. I told her no, and then said I had never been asked that before. She said, “We don’t usually ask men that question unless they are elderly.”

At first I just laughed, but then I remembered that I do qualify for Social Security this year, so I guess I am officially elderly. Some people might be afraid of reaching that milestone, but not me. It means I have made the long awaited transition from pervert to dirty old man. A waitress will slap a perv for pinching her on the hiney, but you just have to love a dirty old man, right? Golden Corral, here I come!

Most of yesterday was spent doing what I’ve been doing for the last few days, trying to format the printed version of Miss Terry’s Kitchen

. I had hoped it would be done by now, but it’s turning out to be a real nightmare. I don’t know how what should be a relatively easy project can become so difficult.

Sometime in the afternoon Judy Howard, author of Coast To Coast With A Cat And A Ghost

and Going Home With A Cat And A Ghost arrived at the fairgrounds and stopped in for a visit. We met Judy at one of our Gypsy Journal rallies in Yuma and she was pretty new at self-publishing and I offered her a few tips on marketing that she told us yesterday have really helped her. It always makes me feel good to know that I’ve had a positive impact on someone’s life in some small way.

Later we went into town to spend some time with cousin Beverly, and we took her to Culver’s for dinner. They have been advertising their new North Atlantic cod dinners, so Terry and I both tried them. They were excellent, as good as you’ll find at any Friday night fish fry. As I was getting my debit card out of my wallet to pay for our meal, the young lady behind the counter saw my VA card and thanked me for my service and then gave us a 15% discount on our bill! In addition to a Senior discount. How cool is that?

On the way back to the fairgrounds RV park we stopped at the new WalMart that opened just across the interstate. They seem to be using some kind of subdued energy saving lighting and I didn’t like it. It was like I was wearing sunglasses inside the place.

Today I really want to wrap this darned cookbook up, and Terry has a project on her loom that she’s involved in. We’re going back to do some things with Beverly in the afternoon, so it will be a busy day.

Have you signed up for our Free Drawing yet? This week’s prize is an audiobook of Dog’s Run, my stand alone mystery set in a small town in Ohio in 1951. It’s grittier than my Big Lake series, but everybody who has read it says it’s my best work yet. I tend to agree. All you have to do is click on the Free Drawing link and enter your name in the comments section at the bottom of that page (not this one). Only one entry per person per drawing please, and you must enter with your real name. To prevent spam or multiple entries, the names of cartoon or movie characters are not allowed. The winner will be drawn Sunday evening. 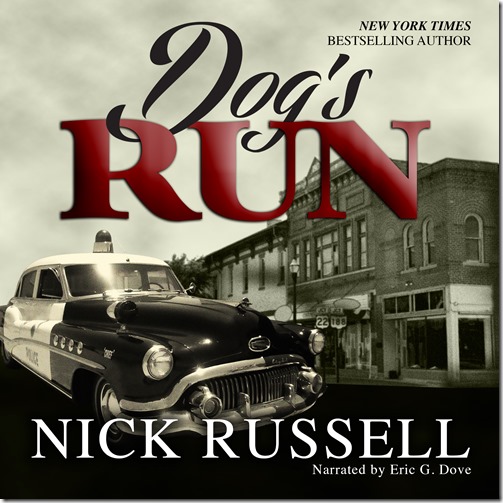 In honor of St. Patrick’s Day, my friend Shirley Bourget has her fantasy Awakened

on sale for just 99¢. You’ve got to like a story that involves a Leprechaun tattoo, right? And another author friend, Corrie Fischer, is offering R.E.M., the first book in her Shattered Sky series, free on Amazon for a limited time. Check it out.