When we left the boondocking area known as the Steps south of Lake Havasu City on Saturday, we not only missed the opportunity to see the fireworks show again, but we also didn’t get to wish Ed happy birthday, so I thought I’d do that now.

I’ve never met Ed myself, but then again, none of the Escapees Boomer crowd that celebrates his birthday at the Steps every year has either. But that doesn’t stop them from having a party.

As I understand the story, several years ago a bunch of Boomers were dry camping at the Steps and it was somebody in the group’s birthday, so a cake was ordered from a local grocery store. But when they went to pick it up just before the birthday party started, somebody had dropped the ball and there was no cake waiting for them. However, Ed’s birthday cake was sitting there unclaimed. Apparently somebody named Ed had died suddenly and his birthday party had been canceled. Death can be a real party pooper. 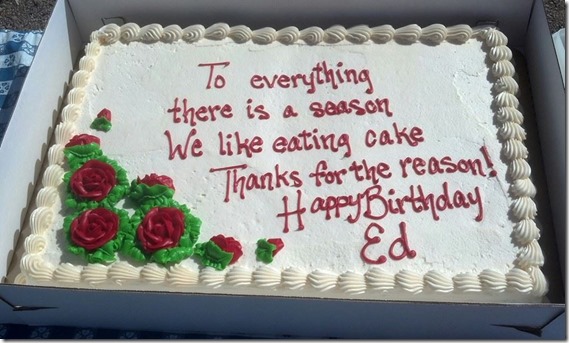 Ever resourceful, the Boomers bought the cake and held a dual birthday party, celebrating not only their fellow Boomer, but also the dearly departed Ed. And every year since then they have held a birthday party for Ed, complete with cake. And to keep the mood light, instead of singing Happy birthday, the group sings the theme song from the old Mister Ed television sitcom – “A horse is a horse, of course, of course, and no one can talk to a horse, of course…..”

We didn’t sleep well when we were at the Steps, so we slept in yesterday, and then I spent the day working on the new issue of the Gypsy Journal, making up for lost time. I’m close to being caught up and should have it to our printer on deadline at the end of the week. Chris and Miss Terry put together a nice dinner of grilled chicken breasts, grilled homemade smoked venison/pork sausage, Kentucky beans with new potatoes, a roasted vegetable medley, pan roasted red potatoes, and Terry’s delicious angel biscuits. We all stuffed ourselves obscenely and I could barely waddle back across the lot from their motorhome to ours to get back to work. Today I’ll be back at it, pounding the keyboard.

Congratulations to Marlene Tillery, this week’s winner of our free drawing for an autographed copy of John and Kathy Huggins’ book So, You Want to be a Workamper?

We had 220 entries this week, and if you haven’t won yet, stay tuned because another contest starts Wednesday.

Today and the rest of the week will be more of the same, chained to my desk and typing as furiously as any two fingered typist with fat little arthritic fingers can. Which can be a lot faster than you might imagine, given enough practice.

Thought For The Day – I have never faked a sarcasm in my life.