Charles and Chris left their lot in the Yuma Foothills a little after 7 a.m. yesterday morning, and after checking e-mail and the news to see who we’re at war with this week, we were not too far behind them.

It was about 9:30 by the time we had pulled out of their lot, turned off the master power breaker and locked the gate behind us, and got our Ford Explorer hooked up to our tow bar. After a quick light check we were on the road, headed east on Interstate 8.

Of course, just about the time we were getting up to speed we had to stop for the Border Patrol inspection station, where an agent asked if we were U.S. citizens and waved us on when I said yes. Traffic was light as we climbed up to Telegraph Pass and dropped down the other side, moving right along. 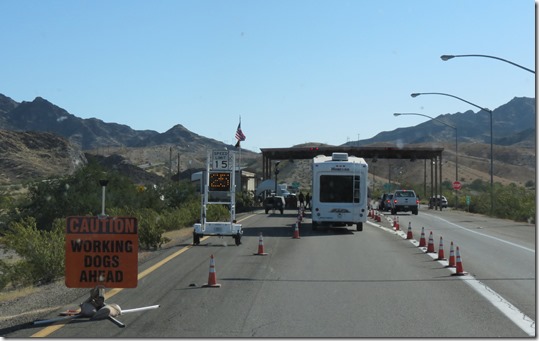 We stopped at Holt’s Shell in Gila Bend for fuel, which was over ten cents a gallon cheaper than the Love’s truck stop just down the road. Holt’s is easy to get in and out of, has a free RV dump station and water to fill your tank, a truck scale, and a nice little Passport America RV park.

Back on the interstate, we traveled another 32 miles, then turned north on State Route 84 and followed it a short distance to State Route 347, which took us 35 miles north to Interstate 10 just south of the Phoenix metropolitan area. SR 347 is a good divided four lane road that has a short (2 mile or so) stretch that gets busy in the little community of Maricopa, but shaved close to 30 miles off the trip as compared to following Interstate 8 all the way to its terminus at I-10 and then going north. 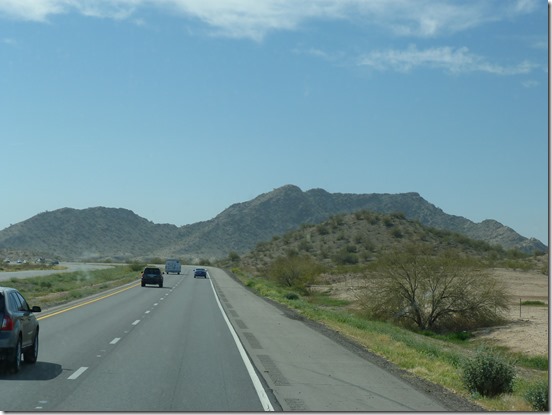 We were only back on the interstate for a couple of miles, then we hooked up with Loop 202 and followed it east all the way to the Apache Junction area. We arrived at Santa Fe RV Park about 2 p.m. and got settled into our site. Since I had been awake since dawn, I was in serious need of a nap and stretched out on the couch for a while.

A little after 5 p.m. we went to Terry parents for dinner and a nice visit, topped off with fresh blueberry pie for desert. Then we stopped at WalMart to see how fast we could go through $165, and as it turns out, it was pretty darn quick! When did things like toothpaste, mouthwash, toilet paper, eggs, and milk start costing as much as precious gems?

Today we want to touch base with our friends Jim and Shar Lewis to see how she is doing with her health issues. But not until we sleep in. This early bird stuff is for, well, the birds.

Thought For The Day – The length of a minute depends on which side of the bathroom door you’re on.

8 Responses to “Easy Trip To AJ”