We left Charles and Chris Yust’s lot in the Yuma Foothills about 11 a.m. yesterday, stopped for fuel and then headed north on U.S. Highway 95. It was a great day for an RV trip, about 85o with no wind and lots of blue sky overhead.

There is a VFW post a little bit north of Yuma that is popular with dry campers and the place was packed. It looked like wall to wall RVs to us. 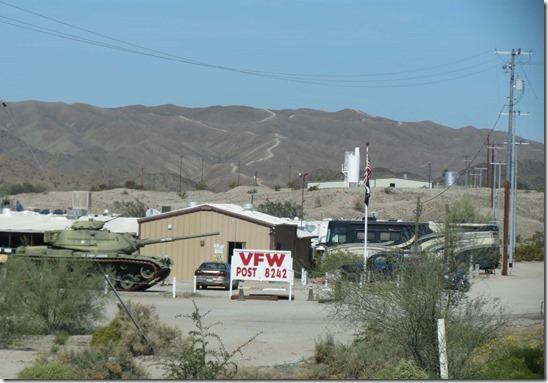 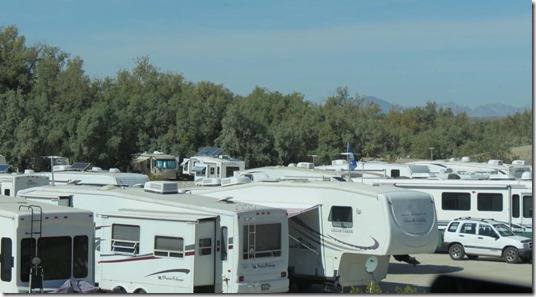 A little further up the highway we passed these massive cannons guarding the entrance to the Army’s Yuma Proving Grounds. I bet they make a big boom! 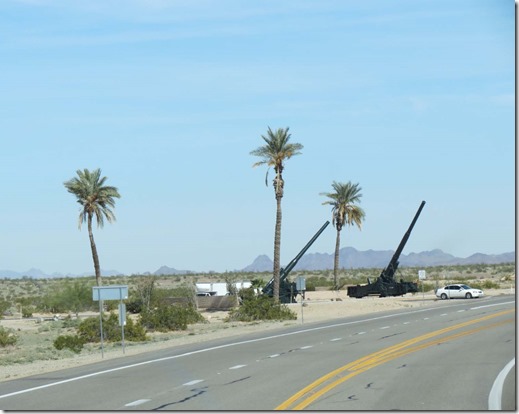 And we went through a Border Patrol check station, where the agent on duty just waved us through. I guess we looked like we belonged here. 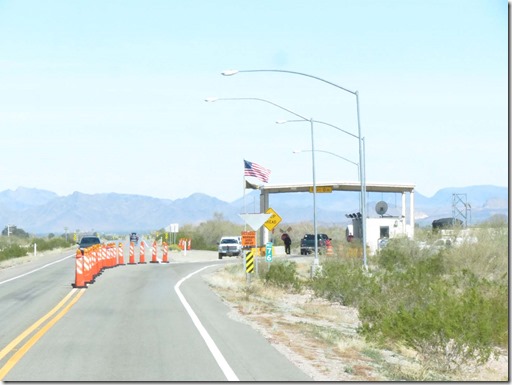 There were still quite a few RVs boondocking around Quartzsite, but nowhere near the numbers there were a few weeks ago. As it gets hotter here in the desert I imagine they will thin out even more. 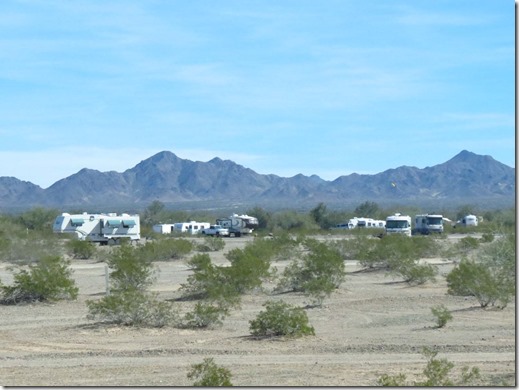 From Quartzsite we continued north on State Route 95 through Parker, past some rugged mountain scenery as the road paralleled the Colorado River. 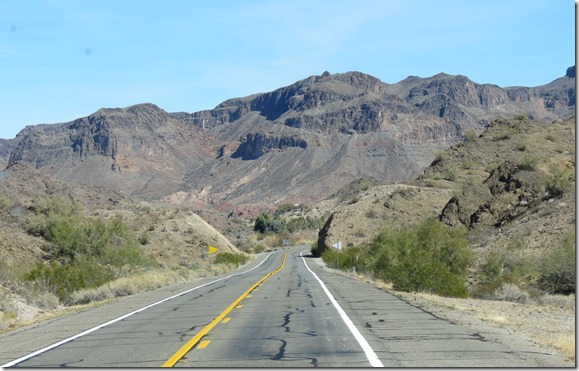 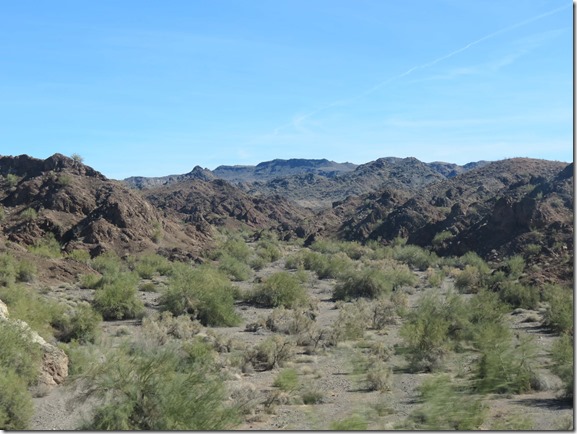 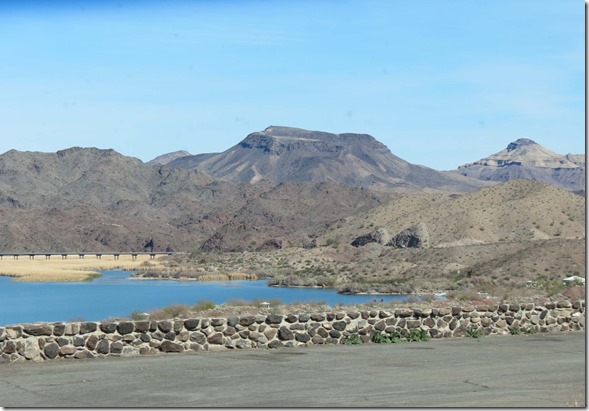 The water was a beautiful shade of blue and I was thinking that our Sea Eagle kayaks would look very good on it. 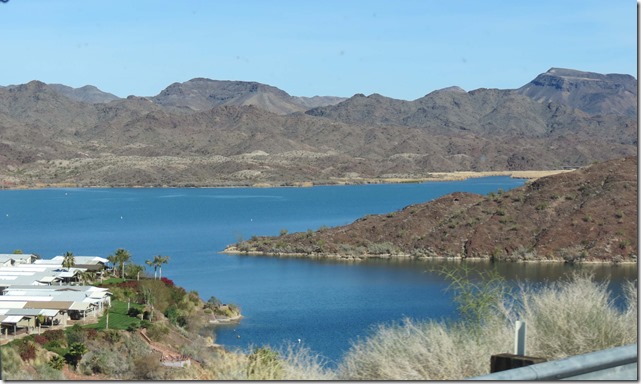 I was amazed at all of the cattails growing along the water’s edge in some areas. 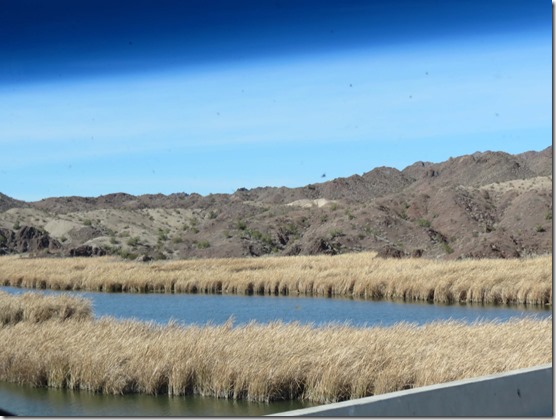 Eventually we made it to an area knows as The Steps a few miles south of Lake Havasu City, where a lot of RVs are boondocking for the Winter Blast pyrotechnic show. 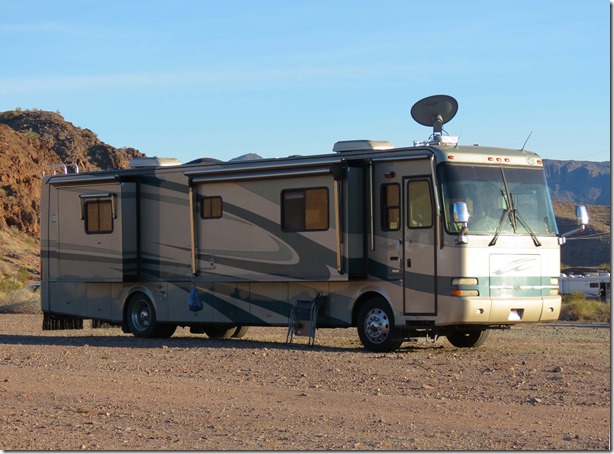 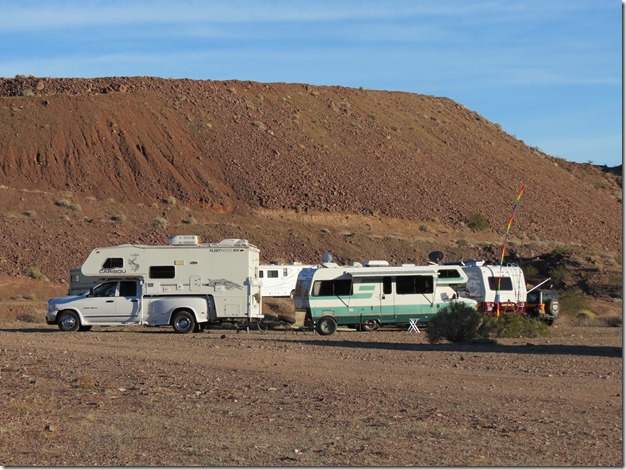 We found ourselves a patch of ground where we could almost get level and parked near some of the Escapees Boomer group who comes here every year. Soon after we got settled in our friend “Cool” Judy Rinehimer came by to say hello and visited for a while, filling us in on some of the details of the fireworks show that runs now through Sunday. We had not seen Judy in a long time so that was a treat.

About 5:30 we left and drove the Explorer into Lake Havasu City to meet Bobbi Holmes and her husband Don for dinner. Bobbi is a Facebook friend who belongs to an online authors group I participate in and though we have exchanged e-mails and talked online for quite a while, it was our first face to face meeting.

We had a very nice visit, talking about our RV adventures, their life in Lake Havasu City, writing and anything else that came to mind. Among her other achievements in life, when she was a youngster Bobbi used to jump in the family boat and cross the river alone from the California side to Arizona to go to school, and back across to go home at the end of the day. She said the boat had a tendency to leak and sometimes it was a race to get across the water before it sank! Don is in the real estate business, so if you ever need property in the Lake Havasu area, he’s the man to see. Check out his website www.havasuholmes.com.

Here is a picture of Don, Bobbi and me after dinner. Thanks for making time for us, Don and Bobbi, we enjoyed it! 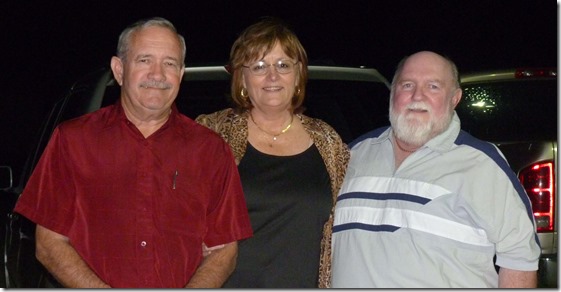 If you’re looking for some great reading, Bobbi writes nonfiction under her real name, Bobbi Ann Johnson Holmes, and fiction under the nom de plume Anna J. McIntyre. Some of her books include Havasu Palms, A Hostile Takeover about her family building the Havasu Palms Resort when she was a girl and having it stolen out from under them, and the Coulsen mystery romance series (Coulson’s Secret

, Coulson’s Crucible, etc) as well as the Sensual Romance series (After Sundown

Over 150 blog readers have entered this week’s Free Drawing for an autographed copy of John and Kathy Huggins book So, You Want to be a Workamper? All you have to do is click on the Free Drawing link and enter your name in the comments section at the bottom of that page (not this one). Only one entry per person per drawing please, and you must enter with your real name. To prevent spam or multiple entries, the names of cartoon or movie characters are not allowed. The winner will be drawn Sunday evening. 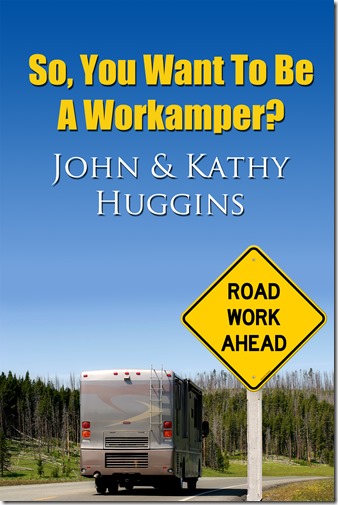 Thought For The Day – One day, you’ll be just a memory for some people. Do your best to be a good one.

One Response to “Boondocking And Bobbi”