That’s right, yesterday Dennis Hill got a real butt chewing And it wasn’t just me. Miss Terry, Charles and Chris Yust, and even Dennis’ pretty wife Carol were doing it, too. And it went on for hours! By the time we were all finished, I was surprised he had any butt left!

No, Dennis didn’t do something dumb like wreck his RV or pretty orange Jeep, or say something incredibly stupid. Well, okay, you can pretty much bet that sooner or later Dennis will say something incredibly stupid, but this wasn’t the reason for the big butt chewing. (Did I just say Dennis has a big butt?) Actually the butt we were chewing was some pork butt he had smoked and brought over for dinner, and it was delicious!

The six of us had a good time swapping lies and telling jokes and there were a lot of laughs going around. Of course, my buddy Chris spends a lot of time laughing. She just has a happy soul. Charles is laughing on the inside, but with the rest of us talking so much he couldn’t get a word in edgewise. 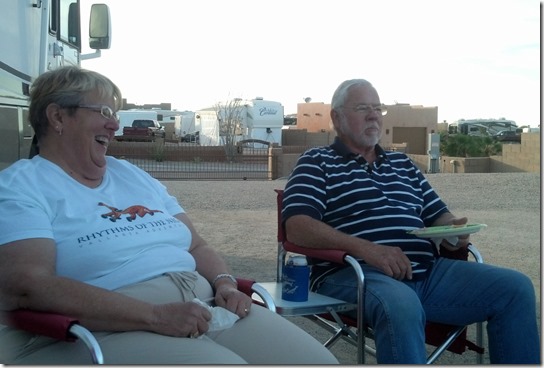 Carol looks like she is telling a fish story and is describing the one that got away! Meanwhile, Dennis is just wishing we’d leave him a little butt to take home for a midnight snack. 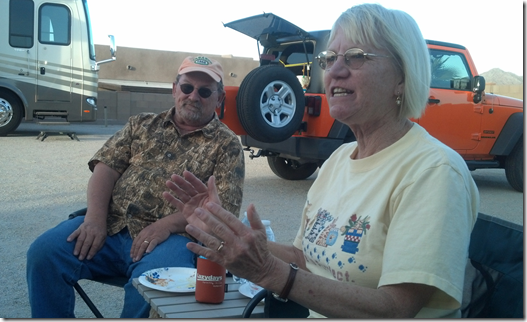 I think Miss Terry was puckering up to kiss me here because I’m just so darned lovable. 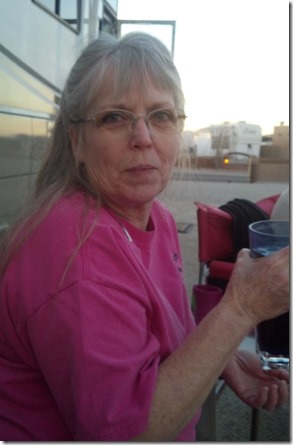 Ahhh… sunset in the Foothills in Yuma. 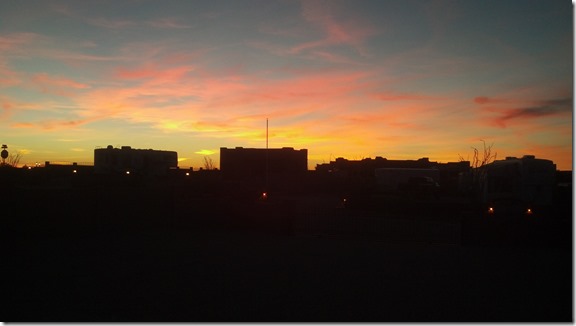 If you ever think you’re having a bad day, just remember the poor folks at the National Corvette Museum in Bowling Green, Kentucky, where a giant sinkhole swallowed eight classic Corvettes yesterday! Check out this video of the sinkhole in action from USA Today! We toured the museum several years ago, and as the former owner of a couple of classic Vettes, I really enjoyed it.

But there is good news too! Yesterday the audiobook of Big Lake Blizzard

became available on Audible, Amazon and iTunes. This makes five audiobooks I have out now. Dog’s Run, which was released a few days ago, has already sold over 40 copies! 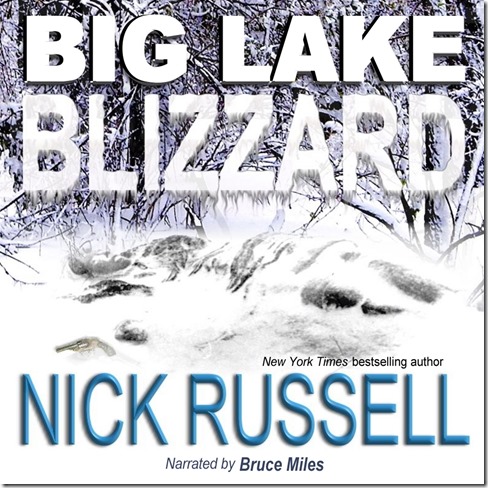 As of last night, 80 people had already entered this week’s Free Drawing for an autographed copy of John and Kathy Huggins’ book So, You Want to be a Workamper? All you have to do is click on the Free Drawing link and enter your name in the comments section at the bottom of that page (not this one). Only one entry per person per drawing please, and you must enter with your real name. To prevent spam or multiple entries, the names of cartoon or movie characters are not allowed. The winner will be drawn Sunday evening. 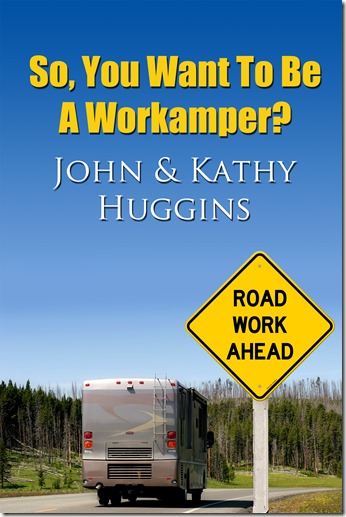 And if you’re looking for a good Noir detective drama, check out The Package II – Revenge, the second installment in Cleve Sylcox’s Package book series. It’s currently free on Amazon.

Thought For The Day – Of course I talk to myself. Sometimes I need expert advice.

3 Responses to “A Big Butt Chewing!”