Nick's Blog » Where Did The Day Go?

Congratulations to Jim Hamm, this week’s winner of our drawing for an audiobook of Birdsongs

, by Jason Deas. We had 164 entries this time around, and stay tuned, because a new contest starts Wednesday!

They say time speeds up as you get older and if that’s true I must be around a thousand years old by now. Because every time I look around I’ve lost a big chunk of time.

Yesterday was a good example. We were up a little earlier than usual because we wanted to run around dropping off sample bundles of the Gypsy Journal at the RV parks here in Yuma. Not that we were up at the crack of dawn or anything. Closer to the crack of noon.

I think everybody in the country wanted to talk to me, because had a huge number of e-mails to work through and most of them weren’t the usual forwards and junk mail that took a couple of hours to get through. This was one of them from somebody asking if I had made a quick trip to Florida. Don’t blame me, I’m busy ruining the weather here in Arizona this winter! 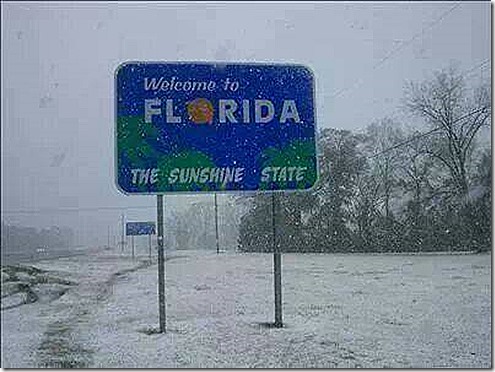 Once we were done with e-mail and a couple of telephone calls, we were getting ready to leave when Dick and Phyllis Schell showed up for a visit. We have not seen them in a long time and it was a nice surprise. Phyllis was one of Terry’s most faithful volunteers at our Gypsy Journal rallies and we enjoyed chatting them them and having some time to visit, away from the hectic activity of an RV rally. They apologized for interrupting our plans, but we tried to assure them that we were delighted to see them and those sample papers could wait.

It was a little after 3 p.m. when we finally did set out, hitting the RV parks on the north frontage road along Interstate 8. We dropped off a few bundles, but a lot of the offices closed early on Sunday, so we’ll catch them later this week when we hit some of the other RV parks in town.

We drove out to the Escapees Kofa Co-op, and though the office was closed we left a bundle of papers in a rack inside the main building. We dropped off another bundle at an RV park nearby, and by then it was 5 p.m. and we were hungry. Terry’s sister Lisa had given us a Texas Roadhouse gift card for Christmas and I’m always in the mood for a good steak, so that worked out fine.

By the time we got home, the day was gone and I spent the rest of the evening answering the e-mails that had come in while we were gone, chatted with the folks in my Facebook authors group and before I knew it, it was time to write and post the blog.

A few people have reported having problems accessing the daily blog and/or the digital edition of the paper. In every case, they are using Firefox as their web browser and if they switch to Internet Explorer, Google Chrome, or any other browser, it works. This seems to happen at least once or twice a year with Firefox and I have no idea why. One reader suggested I reformat the blog and our digital edition to work better with Firefox. That’s not going to happen because A) I have no idea how to do that and, B) Only Firefox users are having the problem and all they have to do is use another browser, which is already on their computer. If I could figure out how to reformat things it might mess it up for the majority of readers who don’t use Firefox. So basically, if it ain’t broke, don’t fix it.

Keeping up with the constant changes in the RV industry is a fulltime job, and who has time for it? A while back John Huggins from Living the RV Dream turned me on to the RV Daily Report, which has information on new products, campground news, and news for RV owners. Check it out, I think you’ll be impressed.

Looking for something to read? My author friends always have new books and great deals going on. If you’d like a short story with a feel-good ending, check out The Builders’ Report by Suzy Stewart. And for you science fiction readers, be sure to get John Daulton’s The Galactic Mage, which is specially priced at 99¢ for a short time.

Another friend of mine, Steven Thomas, has a free e-book on Smashwords titled Drummer Dancer – The Lyrics. Steven tells me that it is an addendum to his autobiography I was a drummer she was a dancer, which is also free on Smashwords. The book has lyrics Steven has written over the last 30-something years and the stories behind each of them.

Thought For The Day – At the end of the day, who you are is completely up to you.

7 Responses to “Where Did The Day Go?”