My friend John Huggins from Living the RV Dream is a lot more technically inclined than I am, and the other night when we were having dinner with John and his pretty wife Kathy, we were talking about how far technology has come in the 15 years we’ve been fulltime RVers. No, we didn’t always have WiFi and cell phones that work as hotspots, and wireless modems. Life was really hard back in the “good old days.”

When we started out, cell phones were few and far between and access plans were expensive, and outside of big cities getting a signal was sometimes impossible. E-mail? We would carry our laptop computer to the campground office, pay $1 to get online long enough to download our e-mail, and read it offline. Then we’d write our replies and wait our turn to get back in line to send them out.

I remember our first wireless modem, an air card type thing called the Ace of Spades that was slower than dial up when it worked at all. But imagine logging onto America Online right from our motorhome! Who’d have thought something like that was even possible?

Then we got a nifty device called PocketMail, which allowed us to hold it against a regular telephone to download and send e-mail. No attachments, but still a big step forward. We were “with it!”

The next step forward were the huge dishes that offered high speed satellite internet. You could pay many thousands of dollars for an automatic rooftop dish, or a couple thousand for a tripod mounted dish that you pointed manually.

Some of the folks who sold the expensive automatic units spread all sorts of outlandish rumors about the rooftop dishes. They claimed that they were illegal, and dangerous in the hands of anybody except a certified installer. They said that if you aimed one wrong you could “knock an airplane out of the sky.” I always said that was nonsense, because if that were true every wacko kid and homegrown terrorist would be out in the backyard shooting down airliners. One rumor claimed that a gentleman in an RV park walked by an improperly pointed tripod dish and it blew the ink pen he had in his shirt pocket clear through his heart! There were stories of SWAT teams from the Federal Communications Commission swarming down on RV parks and rallies seizing illegal dishes and the RVs of their owners. Yeah, I know that really sounds crazy, but we heard all of those stories and more!

Here’s a fun story about the days of satellite internet dishes. We had a hybrid, a tripod unit that we mounted to a special folding mast on top of our MCI bus conversion. In transit the LNB arm was removed and stored inside the bus. When we were stopped, I would boost Terry up through the emergency escape hatch in the roof over our bed, and she was so good at aiming the dish that we were usually online as fast as somebody with an automatic dish could deploy theirs. 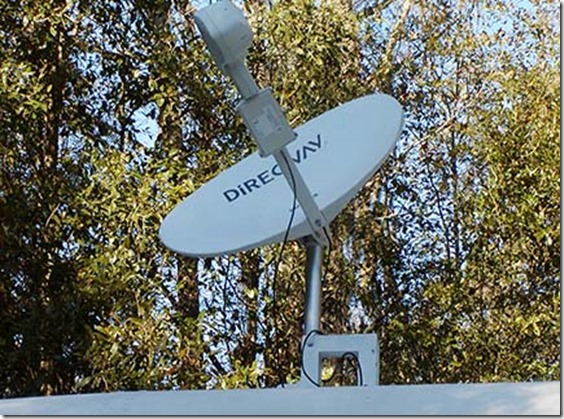 Once we were at Elkhart campground and I started to boost Terry through the roof, but she had me stop because she forgot the written coordinates to aim the dish and needed to retrieve them. I started to boost her again and she had me stop again because she needed the wrench she used to tighten the LNB on with, Finally we were ready again, and it was one, two three and up through the hatch. Terry was setting the dish up when the man in the RV parked next to us came outside and said, “I’m so glad to see you!” Assuming it was one of our readers, Terry said she was glad to see him, too. The man told her, “I was sitting there having my coffee and I saw this head coming up through the roof of your bus and I told my wife to look at it, and when she did it was gone. Then it came back again! She said that whatever the heck was going on over there was none of our business!” I’m glad we cleared that up for him. Yeah, we’ve come a long way, baby!

, by my friend Jason Deas. All you have to do is click on this Free Drawing link and enter your name in the comments section at the bottom of that page (not this one). Only one entry per person per drawing please, and you must enter with your real name. The winner will be chosen this evening. Good luck. I hope it’s you! 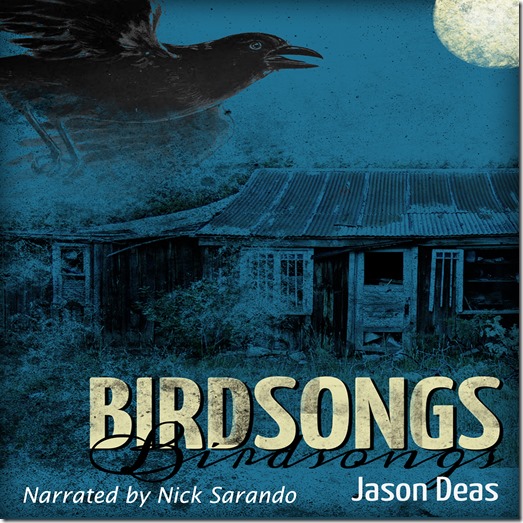 Here are some good reading deals for you to round out the weekend. Capitol Offense, the second book in my pal George Weir’s excellent Bill Travis mystery series, is just 99¢ on Amazon. George also has a short story that will get your blood racing; check out The Woodsman. And if you like The Woodsman, you’ll enjoy Thomas Jenner’s Kellie’s Diary: Decay of Innocence, a series of diary entries through the eyes of a little girl as she tries to survive the end of the world.

Thought For The Day – To be old and wise, one first has to be young and stupid.