Nick's Blog » More Than You Think

When I posted yesterday’s blog about adult children putting their RVing parents on guilt trips I assumed I’d get a couple of e-mails and a few comments on the blog page, but I was surprised by how many e-mails I received. Apparently this kind of selfishness happens more than you or I think.

One blog commenter, whom I advised a while back to stop playing babysitter for the grandkids every summer while their parents were off playing, said that they took that advice, and one of their daughters has now disowned them. Another regular reader e-mailed me to say that her son, who is a mechanic, became so upset when they became fulltime RVers that he refused to help his dad wire the tow car before they left.

Another couple said that after spending the last four summers parked in their daughter’s backyard helping remodel their house, they announced that this is their summer to finally go to Alaska. The daughter and son-in-law told them that they were selfish and that if they went, to never return again. And then there is the son and daughter-in-law who refused to let the grandchildren talk to them when they called Christmas Day because they chose to stay in Florida and not drive back to New Jersey for the holidays.

Just as bad are some of the parents who use guilt to control their RVing offspring. I heard about mothers who faked illness to get them to change their travel pans and return to their old hometowns, and a father who harangued his son for breaking the family tradition by not coming home to Wisconsin for Christmas dinner with the rest of the family.

Perhaps the saddest were two different couples who actually gave up the RV lifestyle to placate family members. Both said they were heartbroken to get off the road, but they just got tired of the constant badgering and arguing. I guess that’s what they felt they had to do, but there is no way we would do that. Anybody who would try to force me to give up my dreams for their convenience is no one I would want to spend much time around, family or not. Who knew there were so many selfish people in the world?

I got an interesting towing fuel economy infographic from an outfit called HitchAnything.com the other day. If you’re in the market for a new tow vehicle, you might find it useful, although I can’t guarantee the accuracy of their report.

So far over 110 people have entered this week’s Free Drawing for an audiobook version of Explanations and Advice for the Tech Illiterate by Randall Morris. This is a great guide to the commonly misunderstood elements of computers and home theater and explains things in a basic, understandable way without sounding too "techy." Topics include: basic computer types, basic home theater (video), basic home theater (audio), audio/video cables, computer viruses, e-mail security, understanding encryption & passwords, backing up your hard drive, and computer speed/startup items. All you have to do is click on the Free Drawing link and enter your name in the comments section at the bottom of that page (not this one). 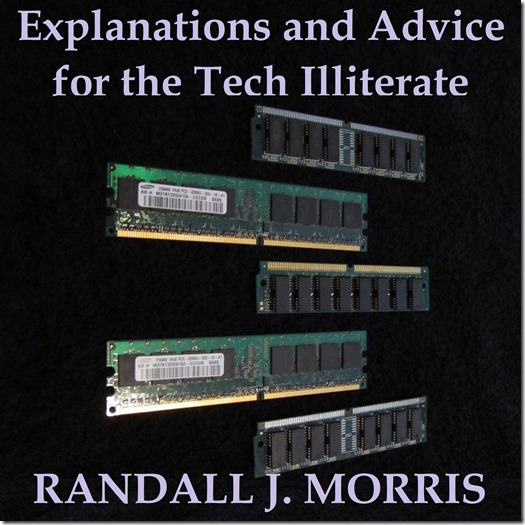 I have a couple more free books to tell you about before I wrap this up for today. First up is my buddy Dale Roberts’ Irrefutable. If you like James Patterson’s Alex Cross novels, you’ll like this thriller. And then there is Corrie Fisher’s REM, the story of three young women forced to confront their inner horrors in an unimaginable way that will leave you breathless is free on Smashwords.

Thought For The Day – The problem with political jokes is that so many of them get elected.

9 Responses to “More Than You Think”