As I wrote in Wednesday’s blog, when I called the VA hospital in Tucson Monday, they still did not have a time for my skin cancer surgery, but were “pretty sure” it would be Thursday. But nobody knew what time it would be or where it would be at the hospital. So we came back down to Tucson on Wednesday to be here for it.

I was on the phone early Thursday morning trying to figure out where to be and when, and nobody knew anything. Finally after several hours and many phone calls I was told to come in yesterday morning and go to the dermatology clinic. I did, and met with the Physicians Assistant (PA) who did the original biopsy. He asked why I was there, saying I did not need to be because he had already scraped and burned the cancerous area and it didn’t need anything else. Terry and I both told him he had only done a biopsy and he insisted we were wrong according to his records. When we insisted he had not, he backpedaled and said, “Well, it says in one place I did but, in another it says I didn’t. So I’ll just do it now.”

Terry asked him what happened to the surgery and he blew that off, saying it wasn’t necessary, he could do a “scrape and burn” and that was 95% effective. Then I asked why a doctor went to the trouble to call me at 5:30 on the 18th to tell me I needed surgery if it wasn’t necessary? I figure doctors have more to do than just call me to chat. His response was that this was no big deal, that squamous cell carcinoma is a slow growing cancer that isn’t “usually” a problem. That may be true and I’m sure mine is not all that serious, but my own research had taught me that some 2,500 people die from it in the United States every year.

By then neither Terry nor I had any confidence in this clown and let him know it. I had no intention of letting him touch me again until I talked to somebody else. When all was said and done, I have an appointment to go back next week for surgery. The surgical nurse said the surgery had a 99% success rate. I’ll take an extra 4% edge any day of the week!

Too many people just assume that they have to do whatever the “professional” tells them. But it’s my body, and as out of shape and flabby as it is, I’m kind of attached to it. We’ll do it my way.

So we’ll hang out here in Tucson for a couple more weeks for the surgery and follow-up, and then figure out our next move. We had reservations at the Palm Springs Thousand Trails for mid-January, but we’ll have to cancel them. We’ve done the Quartzsite thing too many times already, but we may go hang out in Yuma for a while, and I’d like to go up to Winter Blast in Lake Havasu City in February. We’ll just play it by ear and see what happens.

Over 130 people have entered this week’s Free Drawing for an audiobook version of Explanations and Advice for the Tech Illiterate by Randall Morris. This is a great guide to the commonly misunderstood elements of computers and home theater and explains things in a basic, understandable way without sounding too "techy." Topics include: basic computer types, basic home theater (video), basic home theater (audio), audio/video cables, computer viruses, e-mail security, understanding encryption & passwords, backing up your hard drive, and computer speed/startup items. All you have to do is click on the Free Drawing link and enter your name in the comments section at the bottom of that page (not this one). 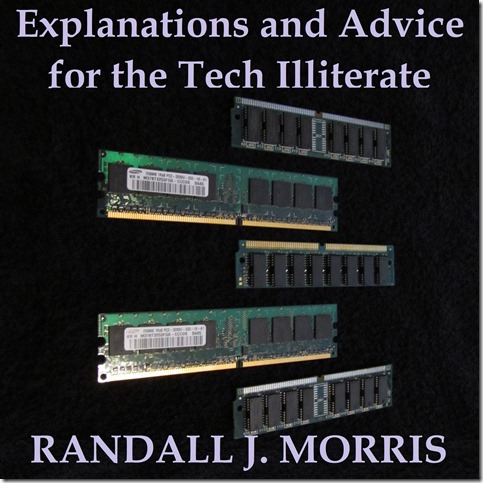 Thought For The Day – You can’t make the same mistake twice. The second time you make it, it’s no longer a mistake, it’s a choice.