Most of the folks from the dog show have left the Pima County Fairgrounds and it’s a lot quieter here. The last two mornings the only thing that woke me up was my own snoring. Miss Terry says she doesn’t know which is worse.

But the dogs have been replaced by new critters. Last night as we were returning from a visit with my cousin Beverly we saw a coyote and two javelina wandering around the fairgrounds. Here is a very grainy picture I managed to get of one of the javelina from my cell phone, illuminated by the Explorer’s headlights. 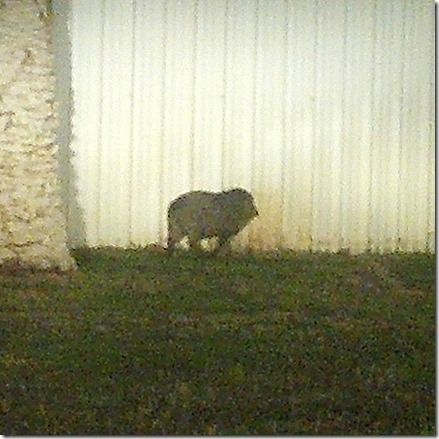 Though javelina look like wild pigs and a lot of people call them hogs, they are actually members of the peccary family, originating from South America. They are common in central and southern Arizona and are usually found in herds of two to more than twenty animals. They stand about 20 inches tall and average between 40-60 pounds. Javelina have a reputation as being dangerous, and though they can inflict serious damage with their tusks when cornered, like any wild animal, if you leave them alone they are happy to do the same.

Before heading into town yesterday afternoon we stopped at the RV office here at the fairgrounds and paid for another week and dropped off a bundle of sample copies of the Gypsy Journal. Then we went to the back of the property, where the temporary pens and tents were set up for the dog show. It’s a nice grassy area and now that it’s cleared off again, I’m going to use it to fly my Revolution 1.5 SLE Quad Line Stunt Kite . I’m still learning how to control a quad line stunt kite and would prefer to have nice soft grass to crash on instead of hard packed dirt, rocks, and all of the sharp stuff that grows in Arizona.

Then we stopped to check out the Southeast Regional Park shooting range a mile or so from the fairgrounds. It’s a nice facility, with separate rifle, pistol, clay target and archery ranges. I may have to go over there and spend an afternoon punching holes in paper while we’re here.

It’s been a while since we have had our Sea Eagle kayaks in the water and we’re long overdue. Even in the desert there are some nice bodies of water for paddling and we may have to find one.

Speaking of paddling, blog reader Jeff Savournin sent me a link to the National Park Service’s National Water Trails System. The System is a network of water trails the public can explore and enjoy nationwide. The website is a great resource for RVers who enjoy getting out on the water.

It’s Wednesday, and that means it’s time to announce this week’s Free Drawing. This week we are giving away an audiobook of Big Lake, the first book in my Big Lake mystery series, which made the New York Times Kindle bestseller list and has been highly reviewed by both readers and e-book blogs. All you have to do to enter is click this Free Drawing link and enter your name in the comments section below. Only one entry per person per drawing please! The winner will be chosen at random on Sunday evening. 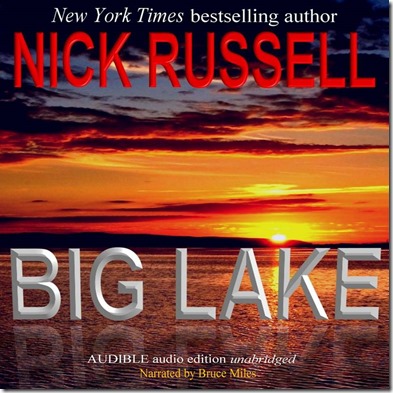 While we’re talking about dogs and books, my pal Carol Ann Newsome is holding an online launch party today from 7-11 Eastern time for her new book, Maximum Security, the third book in her Dog Park mystery series. Log onto her event page on Facebook and you might win an e-book, audiobook, an astrology reading, or even an oil painting of your dog!

And finally, good news for all of you science fiction fans – Saxon Andrew’s newest book, Dahlia’s Deception Book 9 in the Annihilation Series just came out yesterday and is already climbing the charts. I’m sure my buddy Greg White, who is a big Saxon fan, was one of the first to buy it.

Thought For The Day – Don’t put the key to your happiness in someone else’s pocket.