Nick's Blog » A New Winner And An Old Friend

Congratulations to Bob Moritz, this week’s winner of our Free Drawing for an autographed copy of Al Hesselbart’s great book of The Dumb Things Sold Just Like That! We had 214 entries in this week’s drawing. Thanks everybody for participating! Stay tuned because the next drawing starts on Wednesday.

If you didn’t win and want to read Al’s book (and you really should), don’t despair, it’s available in both e-book and in print from Amazon.

Now, I do have to mention something negative about these drawings. We very plainly state that there is only one entry per person per drawing, and most people are cool with that. But there always seems to be one in every crowd who has to try to scam the contest.

There is one person, whose real name I won’t use, but let’s call him Jim Jones, who has entered every drawing as Jim Jones, Jimmy Jones, Jim Henry Jones, James Jones. James Henry Jones, James H. Jones, J.H. Jones, and every configuration of the name thinkable. I guess he doesn’t think I’m smart enough to clue in to the fact that no matter what name he lists in the entry, his e-mail is the same. I was born at night, but not last night!

I mentioned that there was a dog show going on here at the Pima County Fairgrounds over the weekend, so yesterday I decided to walk over and see if I could find an old friend of mine. About 20 years ago, Jill Baum worked for me at my newspaper in the White Mountains of Arizona and we became good friends. We lost touch over the years, but even back then Jill bred and trained whippets, so I wondered if she might be at the show. And sure enough, within just a few minutes I found her! She was getting ready to go into the show ring so we only had a brief visit, but a while later as we were leaving the fairgrounds I saw her again and stopped to introduce her to Miss Terry. It sure was good to reconnect with Jill and I look forward to seeing her again one of these days.

From the fairgrounds, we drove to my Cousin Beverly’s and picked her up and went to a restaurant called Oregano’s Pizza Bistro that had been highly rated on Yelp. 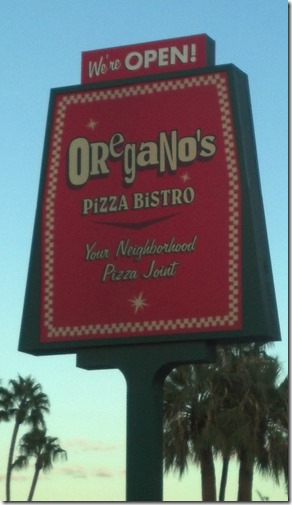 It’s a popular place, and even on a Sunday afternoon we had to wait over half an hour for a table. But they had a covered outside waiting area and the weather was nice so it wasn’t a problem. Here are my two favorite ladies, Terry and Beverly, waiting patiently. 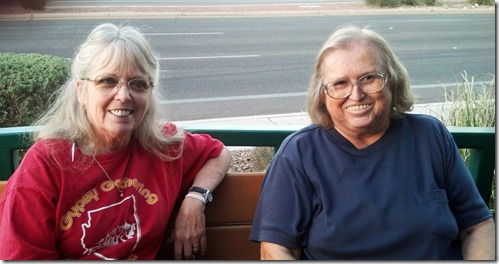 Terry really enjoyed her Italian flag lasagna and Beverly, who had eaten there before, chose the pasta bowl with chicken. I wasn’t as impressed with my pizza. It was a thin crust, which is usually my preference, but the crust was almost cracker crisp. I think I’m just spoiled by Terry’s excellent pizza made from scratch and nothing holds a candle to it.

Even though all three of us have Kindles, we can’t pass a bookstore, so on the way back to Beverly’s apartment we stopped at Bookman’s, which is a chain of used book stores with three locations in Tucson, as well as Phoenix, Mesa, and Flagstaff. Their stores are huge, usually housed in former grocery stores, and the selection of books, magazines, music and other goodies is always impressive. I found two reference books I have been looking for, but the ladies struck out. I guess we’ll have to go back again to give them another chance. Go ahead, twist my arm!

Thought For The Day – There is no such thing as bravery; only degrees of fear.

5 Responses to “A New Winner And An Old Friend”