Nick's Blog » The Curse Is Broken

We put in a long day of driving yesterday but it was worth it to get out of the gray and gloomy Pacific Northwest. We were beginning to grow moss on our webbed toes.

After filling our diesel tank at the Shell station in Sutherlin, at $3.79 a gallon, we got on Interstate 5 and pointed the nose of our Winnebago south. Before long we were climbing into the Siskiyou Mountains, and the next 100 miles or more were a series of uphill and downhill grades (mostly uphill, it seemed). 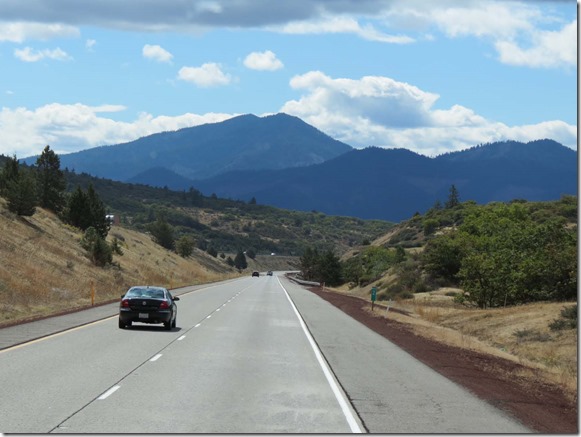 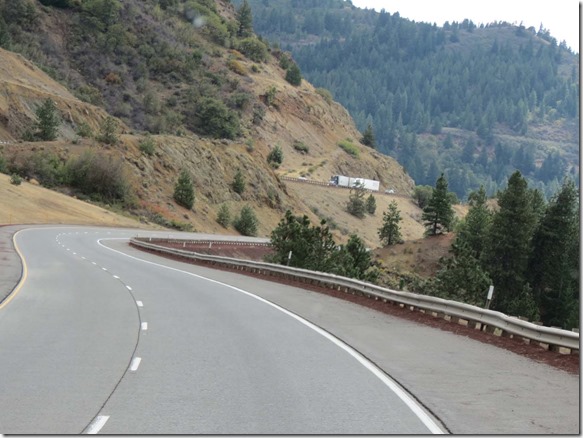 And to add to the fun, it rained most of the way to the California border, 136 miles away. Sometimes it just a sprinkle, and other times it poured. We don’t usually travel in bad weather but we really, really needed to get someplace where the sky was blue!

A couple of miles from the state line we topped out at Siskiyou Summit, the highest point on Interstate 5, at 4,310 feet. Then we began rolling downhill to California. 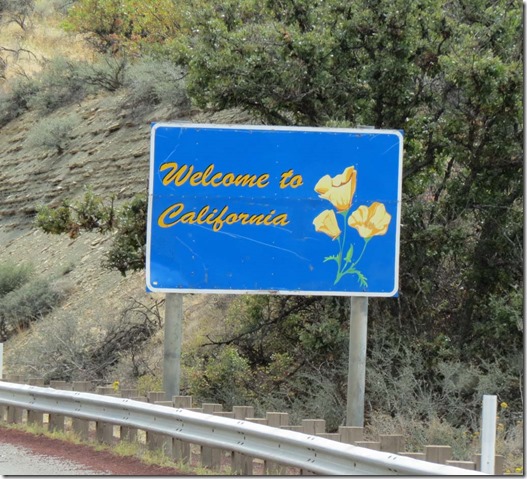 It wasn’t long before we began to see Mount Shasta dominating the landscape with its majestic height of14,179 feet. Mount Shasta has four overlapping volcanic cones and is a dramatic sight that is popular with artists and photographers. 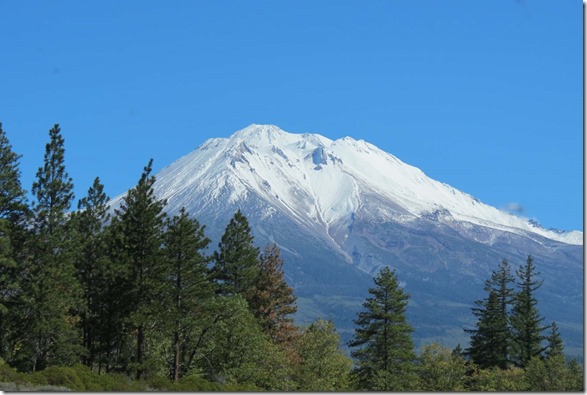 This is as close as I ever need to get to snow. 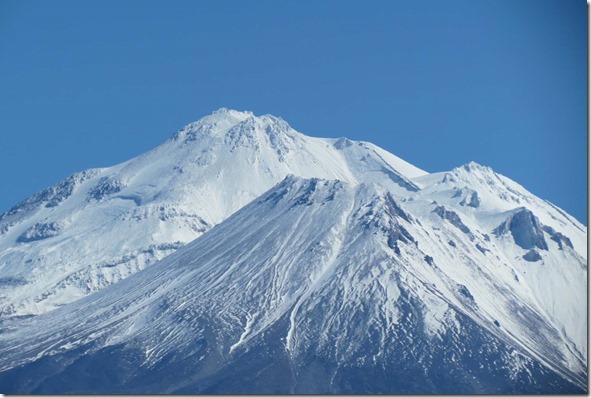 I was a little apprehensive about getting anywhere near Mount Shasta because for years I swore it was cursed. Or maybe I was the one who was cursed. I was driving past it once, back in the late 1970s, in a brand new Datsun with less than 1,000 miles on the odometer and the engine blew just as I came parallel with the mountain. A year or two later I was tooling down Interstate 5 near the mountain in a late model Audi Fox and in the same area, the radiator seemed to explode, losing all of its fluid in a couple of minutes. Another time, I was flying south with my friend Harry Mayowe in his single engine Cessna when we lost all electrical power as we approached the mountain. We set the airplane down at the closest small airfield and before Harry shut the engine down everything was working again. An aircraft mechanic spent three hours looking for a problem and could not find a thing wrong. The rest of our flight was uneventful. And last but not least, when my first wife and I were moving back to Arizona from Washington, I was driving my Dodge pickup pulling a big U-Haul trailer and she was in our van with our two kids, pulling my Triumph sports car. We had just put four new tires on the van when we left Aberdeen and again, as we were passing Mount Shasta, the right rear tire of the van exploded off the rim. It got real squirrely, but she was able to get it off the road and get stopped safely. Coincidence? Probably so, but just in case, I held tight to the steering wheel and hurried past. Nothing bad happened this trip, so maybe the curse is broken. 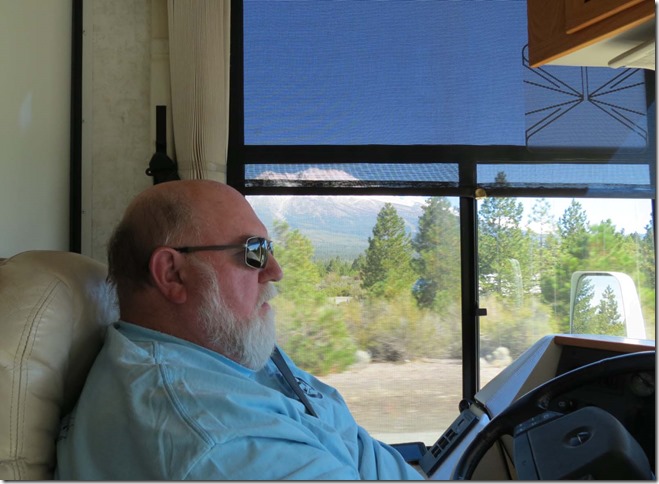 198 miles after we left Sutherlin, we left the interstate behind us and took State Route 89 east, eventually picking up State Route 44 into Susanville. Several people had recommended this route as an alternative to going further south and taking Interstate 80 across the Sierra Nevada mountains. It was an excellent two lane road with wide shoulders much of the way and frequent pullouts to allow traffic to get past us. 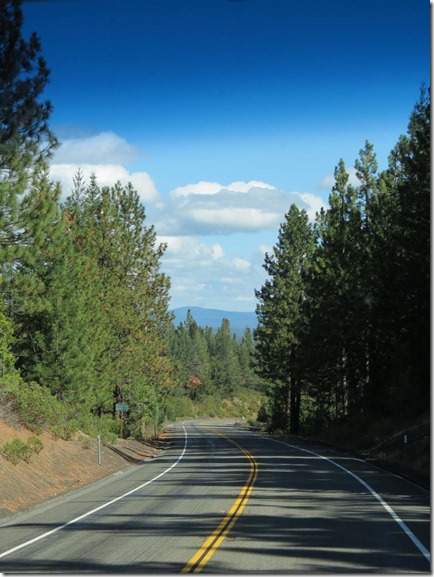 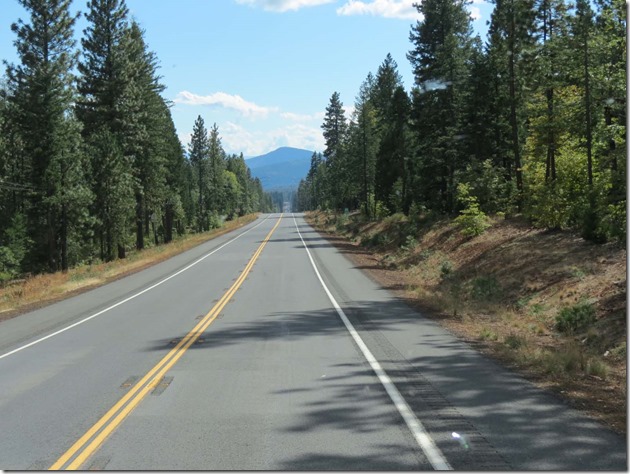 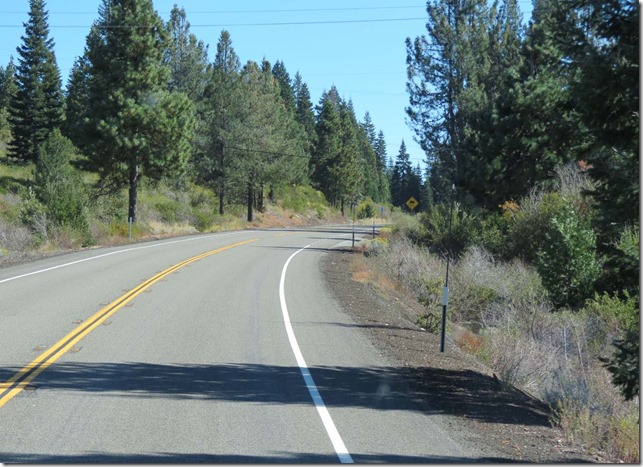 There were a few eighteen wheelers and an occasional RV, but overall traffic was light. 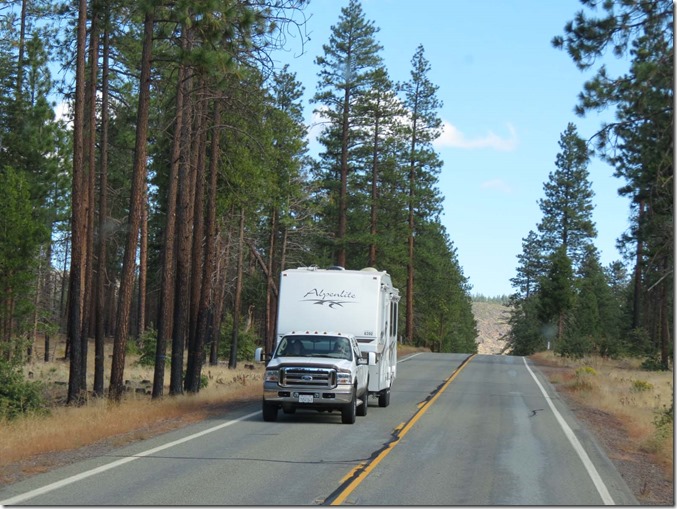 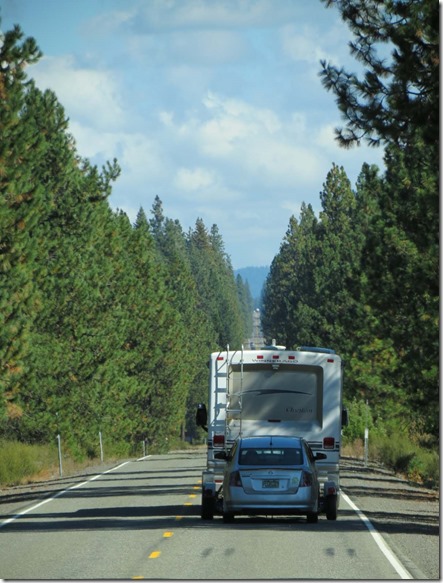 At one point we passed an area that had been ravaged by a forest fire, black skeletons of trees sticking up into the sky. 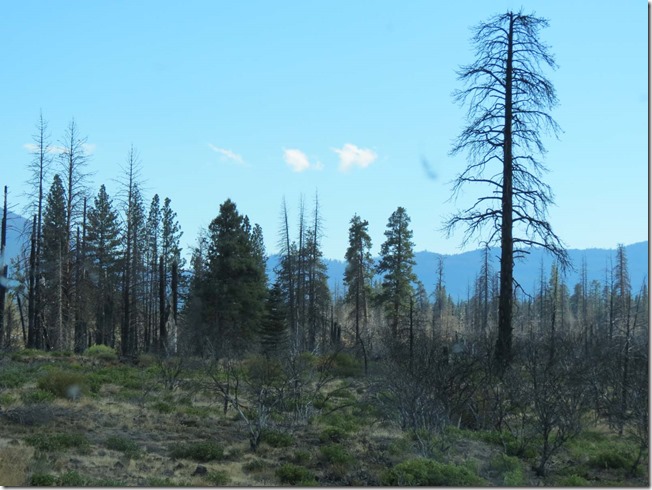 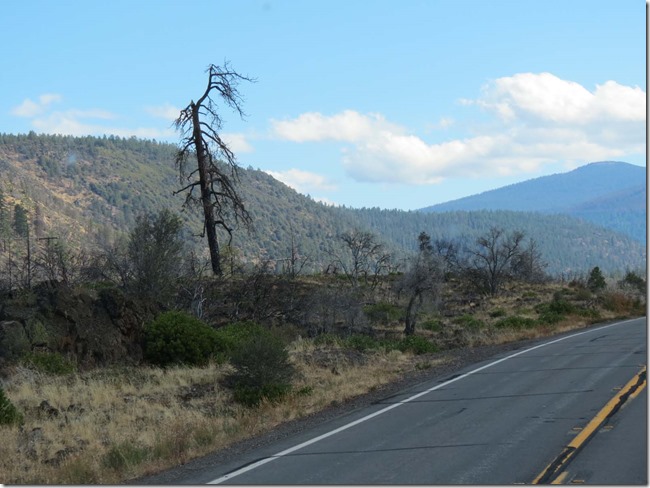 We thought we might overnight at the Elks lodge or WalMart in Susanville, but we got there about 4:30 and really didn’t feel like stopping so we kept on rolling. We picked up U.S. Highway 395 and followed it south to Reno, Nevada and considered overnighting at one of the many casinos there, but traffic was hectic and everybody was speeding around like they were going to a fire someplace. We quickly decided that all we wanted to do was get out of that madhouse. Another 30 miles or so west on Interstate 80 brought us to Fernley, where we filled the fuel tank again, then stopped at a WalMart for the night, with 445 miles behind us. Yes, that’s a long day, but we have blue sky and it’s warm, and that makes it worth it to us!

We have had very good response to our special offer of our 7-in-1 e-book guides to free campgrounds, RV good guys, RV dump stations, fairgrounds camping, casino camping, favorite restaurants, WiFi campgrounds, and our new added bonus Hitching Post RV park reviews. Normally the 7-in-1 e-book sells for $24.95, but for a limited time, we’re offering it with the extra Hitching Post guide for just $20! To order yours, just log onto www.paypal.com and make a $20 payment to editor@gypsyjournal.net and the updated 8-in-1 e-book guide will be delivered right to your e-mail inbox. This is a limited time offer, so get it while you can.

Thought For The Day – Opportunities multiply as they are seized. – Sun Tzu

7 Responses to “The Curse Is Broken”