What’s huge, takes up a lot of room, weighs a ton, and makes Miss Terry smile? No, it’s not me. It’s Terry’s new Baby Wolf loom.

Yesterday afternoon we drove to Prescott to pick up the loom, and the lady selling it surprised Terry by throwing in a bunch of extras, including a lamp that mounts to the top of the loom, extra shuttles, a couple of huge spools of thread, and some other stuff she didn’t expect. How nice.

Terry warned me ahead of time that the loom would become a piece of furniture, and she was right. Here it is folded up, and when opened for use it’s even bigger. About 38 inches wide and 40 deep. We’re still trying to figure out exactly where it will live. But I know my lady, she’ll figure it out. 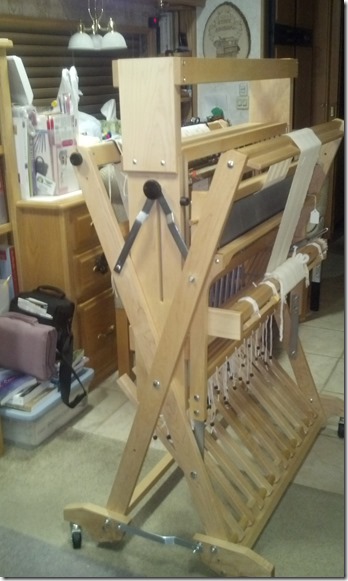 The loom can turn out a project as much as 52 inches wide, and is capable of producing all kinds of intricate patterns in many weights. Terry said she can make anything from towels and tablecloths to blankets, fabric for making clothes, and even rugs with it.

I said it weighs a ton, but actually the loom is only about 50 pounds. It just felt like more when we were trying to get it inside the Winnebago! This thing has more moving parts than a Ferris wheel – ten foot treadles, eight shafts, 800 metal inserted eye heddles, levers, wheels, pulleys, brakes, you name it and I bet it probably has it. It’s intimidating just looking at it, but Terry assures me she knows what everything does and I’m sure she’ll master it pretty quickly. To say she is a happy camper is an understatement.

We all know the rule about RVs; when something new comes in, something old must go out. If anybody out there is looking for, or knows someone looking for a very nice Ashford Rigid heddle loom with a stand, three pair of heddles and lots of extras, Terry will be selling her first loom. It’s less than a year old and does both single heddle and double heddle weaving.

I mentioned in yesterday’s blog that our water pump was leaking, and I planned to buy a replacement pump when we were in Prescott, but the two places I called both seemed to misunderstand me and thought I wanted a motorhome to go around it. Their price was over $75 more than Camping World for the very same item. No thanks. A couple of blog readers suggested we pull off the pump head, clean it up and re-seal it and were pretty sure that would solve the problem. I think we’ll try that first before we buy a new pump.

Fortunately, the water was back on when we got back to the Verde Valley Thousand Trails because our fresh water tank was getting low. The first thing I did was refill the tank once we got the loom inside.

About the time all that was done, our friends Tommy and Carol Davis stopped in to purchase the last three of my Big Lake books, since Tommy has been reading the original one and got himself hooked on the series. They also bought a two year subscription, which means we can eat next week. They are leaving tomorrow, headed for Tucson, and we look forward to crossing their path again somewhere down the road.

After they left I downloaded the first seven chapters of Crazy Days in Big Lake to review from my narrator. It sounds good so far. I know what I’ll be doing today!

Thought For The Day – I would rather walk with a friend in the dark, than alone in the light. – Helen Keller