The wind was averaging 40 – 45 miles per hour yesterday here in the White Mountains of Arizona, and at midday two gusts were recorded at 60 miles per hour. We’re parked next to my daughter’s house and the back half of the Winnebago is sheltered by the building but we’re still feeling the effects. It’s been rocking and rolling our motorhome so much you’d think a couple of hippos were having a honeymoon inside of it!

It’s supposed to let up somewhat today and we’re watching to see what happens. If it looks safe we’ll head down to Apache Junction, about 160 miles away. But if the wind is still a factor, we’ll sit tight another day here at Tiffany’s. I think she can put up with us that long if necessary.

Talk about your needle in a haystack! As I reported in yesterday’s blog, when we were flying kites on a soccer field Sunday, Terry lost a gold, hoop shaped earring and did not realize it until later that night. I gave the earrings to her for our anniversary and they have a lot of sentimental value. Yesterday we braved the strong winds and went back to the field yesterday in an attempt to find it, knowing it was probably futile. The earring is about the size of a nickel and the grass had not been cut on the field recently, but it was worth a shot. I was really wishing I had a metal detector. As it turned out, we didn’t need one. Tiffany found the earring within 10 – 15 minutes. Terry was thrilled, to say the least.

Back at the motorhome we spent some time visiting with Tiffany and then I worked on formatting Dog’s Run for a print edition. I had hoped it was going to be fairly easy, but ran into a couple of snags that I still have to work out. I’ve found that sometimes the best thing to do is to step away from a project when you hit a brick wall, and hopefully when I come back to it in a day or so things will work out.

When Scott got home from work we went to a Mexican restaurant called La Cocina De Eva for dinner. The food and service were good and Scott picked up the check. Could a dinner be any better? Back at their house, we watched The Heat, with Sandra Bullock and Melissa McCarthy. Terry and I saw it last winter when we were in Florida, but Scott and Tiffany hadn’t, and for us it was just as funny the second time around.

Speaking of Florida, this will be the first winter in several years that we haven’t spent part of the time there, bouncing between the Orlando Thousand Trails preserve and Three Flags RV Resort in Wildwood, with side trips to Titusville, Crystal River, and the Keys. We’re already missing it, but we’re looking forward to spending more time with our family here in Arizona this winter. If you’re headed for either state and are looking for things to see and places to go, check out my e-books Overlooked Florida

and Overlooked Arizona. Both are loaded with fun places to see, off the beaten path attractions, and fun adventures. 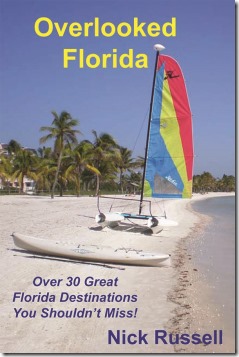 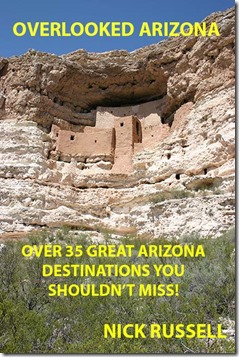 Thought For The Day – I’m not half a bubble off plumb, I am oriented to a different gravitational axis.

5 Responses to “Rocking And Rolling”