All I did yesterday was work on the new issue of the Gypsy Journal, except for a short break to go over to Bob Parker and Donna Huffer’s motorhome for happy hour, where we were joined by Dennis and Pat Swann. We had not seen Dennis and Pat in quite a while and it was a nice surprise to get the chance to visit with them for a while.

Since you really don’t want know how much I accomplished on the new issue so far (17 pages) and how many more I have to go (19 pages), I thought I’d recycle a story from a visit we made to the Rock-a-Billy Hall of Fame Museum in Jackson, Tennessee a while back.

They came from the cotton fields of the Mississippi Delta, from the piney woods of Tennessee, from hardscrabble farms, from the small towns and big cities across the South. They brought with them the traditions of country music that defined their families’ lives, but they embraced a new art form called rock and roll. By combining the best of both, they created their own unique blend of music, which was quickly labeled rockabilly. It took the country by storm in the early 1950s.

Rockabilly made many of these artists stars overnight. It was said that musicians like Johnny Cash, Buddy Holly, Elvis Presley, Jerry Lee Lewis, Carl Perkins, and Roy Orbison went from "cotton fields" to "Cadillacs" in a very short time.

The International Rock-A-Billy Hall of Fame and Museum traces the history and highlights of rockabilly music and features rare memorabilia and photographs to honor the musicians who created the genre.

The museum is the brainchild of Henry Harrison of Jackson. Harrison felt it was appropriate for the museum to be in Jackson since the city is the hometown of rockabilly star Carl Perkins and is located between Memphis (the home of rock and roll and blues music) and Nashville (the home of country and hillbilly music). 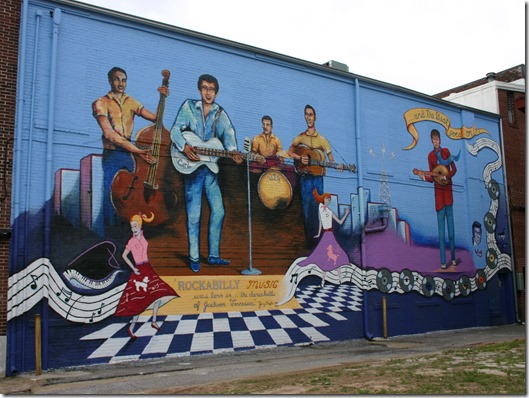 The greats of rockabilly music are enshrined in the museum’s Hall of Fame. The first group of people were inducted to the International Rock-A-Billy Hall of Fame at a ceremony on April 15, 2000, and groups have been inducted every year since. A panel of rockabilly artists and notables selects the inductees.

There is also has a nice collection of videotaped interviews with the people who created the music. This collection continues to grow and presently includes interviews with Brenda Lee, Wanda Jackson, Bill Haley’s Original Comets, the Jordanaires, Ace Cannon, Maria Elena Holly (the widow of Buddy Holly), Tommy Allsup (one of Buddy Holly’s Crickets), D.J. Fontana (Elvis Presley’s first drummer), Bob Moore (bass guitarist who played on a number of rockabilly hits), Bill Griggs (music historian and expert on rockabilly music), and rockabilly author Billy Poore. Most of the videos were shot at the Sun Recording Studio offices by Jackson television station WBBJ, an ABC affiliate.

Every year the museum hosts the International Rockabilly Music Festival, which features concerts, celebrity appearances, historic videos and a dance with late 1950s dress style. The festival is the world’s largest gathering of rockabilly history makers.

Even if rockabilly is not your preferred form of music, a visit to the International Rock-A-Billy Hall of Fame and Museum is well worth your time if you’re in Jackson. It is a trip back in time and you’re sure to find yourself humming an old tune or tapping your toes to the music as you watch the videos of the early artists. And you just may be surprised and find yourself discovering a new old music style to enjoy!

The International Rock-a-Billy Hall of Fame Museum is located one block from City Hall in downtown Jackson, at 105 N. Church Street. The museum is open Monday thru Friday from 10 a.m. to 4 p.m., and Saturday from 10 a.m. to 2 p.m. Parking is on city streets so you should leave your RV at a local campground and drive your tow vehicle or dinghy to the museum. The displays are all on the first floor of the museum, so people with physical difficulties should not have any problems with access. For more information on the museum, call (731) 427-6262 or visit their website at http://www.rockabillyhall.org.