How windy was it yesterday? It was so windy the National Weather Service asked all the politicians in Washington to shut up. No seriously, it was so windy it blew the tramp stamp right off our waitress’ back at dinner last night. For much of the day winds here in north central were 35+ miles per hour, with gusts to 45.

But we both had cabin fever and needed a day out, so that didn’t stop us from driving up to Prescott to visit a couple of weavers Miss Terry had met online and to look at a loom one of them has for sale that Terry wanted to check out.

I can remember the days when I used to see antelope in the fields along State Highway 69 between Interstate 17 and Prescott, but these days the area has built up so much that for most of the way it seems like an endless line of fast food joints, big box stores, and small businesses. Prescott Valley has everything from shopping malls and car dealers to what seems like every chain restaurant in the nation, and traffic to match.

But it was worth it, because Terry made a couple of new friends and found the exact loom she’s been searching for, an eight-shaft Schacht Baby Wolf with every option imaginable. That thing had more moving parts than a locomotive and I got dizzy just listening to them talk about things like heddles, treadles, shuttles, warps, and such. The price was right, now I just need to figure out how to get the rest of the money to pay for it. 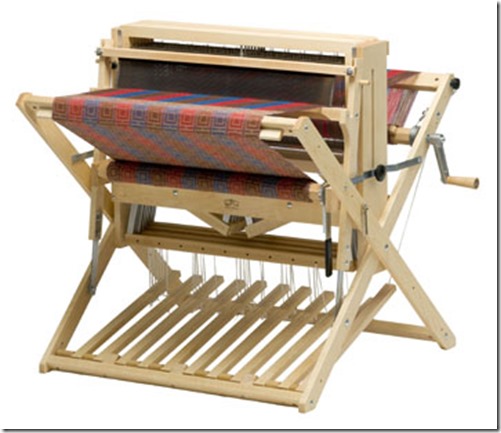 Space can be at a premium and one has to keep their cargo carrying capacity, but living in an RV fulltime doesn’t mean you can’t follow your hobbies. We know weavers, spinners, quilters, painters, keyboard players, wood carvers, even model train enthusiasts that have found ways to incorporate their interests with the RV lifestyle. When we arrived here at the Verde valley Thousand Trails preserve the other day, our friend Tommy Davis was sitting outside his fifth wheel trailer carving a walking stick. We’ve seen painters with easels under their RV awnings, people spinning fiber into yarn, and yes, kite flyers in RV parks. We also have met fulltimers who tow cargo trailers with wood and lapidary shops in them.

And sometimes you have to decide what to keep and what to say goodbye to. There is a popular saying among RVers that when something new comes in something old has to go out. I guess that applies if you’re that close to your RV’s weight limits, but we don’t let ourselves get that close to the line. I’m always afraid that if we do, I might be what has to go!

In our case, Terry will be finding a new home for her rigid heddle loom and stand, and I think she’s considering selling her LeGare circular sock knitting machine, too. Now that’s she gotten more deeply involved with spinning and weaving there just isn’t time for everything.

Speaking of time, it’s time for me to get back to work on the new issue of the Gypsy Journal. But Bad Nick has been busy posting a new Bad Nick Blog titled Who You Gonna Call? Check it out and leave a comment.

Thought For The Day – A good laugh and a long sleep are the two best cures for anything.