Today is my buddy Greg White’s  65th birthday, which makes him really, really old! But that’s okay buddy, I’m not that far behind you. Just two charming old farts, right? Although his pretty wife Jan and Miss Terry might disagree with that statement since when the two of us get together, we seem to regress back to about junior high school. Seriously, it’s one step above “pull my finger” at best.

The first time I met Greg, he and Jan came to Life on Wheels, where Terry and I were teaching. I wore glasses back then and we look so much alike that people kept coming up to Greg and giving him money for Gypsy Journal subscriptions. Greg always says he kept the money but he did at least give me their addresses so I could send them their papers. 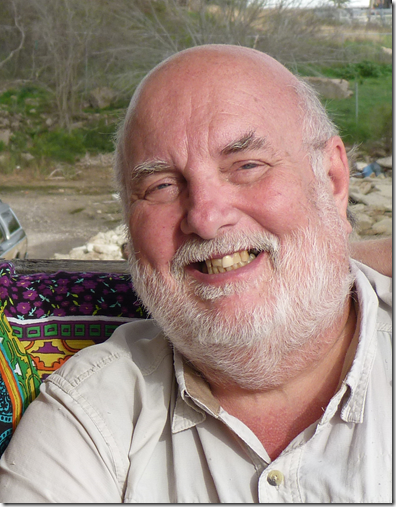 The next time was at our first Gypsy Journal rally in Casa Grande, Arizona in 2008. As seemed to happen with so many of our rallies, it poured for days and the fairgrounds turned into one giant mud puddle. On the day everybody was supposed to leave someone came to tell me that somebody in a big old motorhome had tried to take a shortcut across an open field and got stuck, and it was taking two tow trucks to get him out. I had to go see who’d do something that dumb. Yeah. It was Greg. I didn’t really know him back then, but I put this picture in my blog and asked, “Who does something this dumb?” Greg e-mailed me to say he couldn’t believe his hero dissed him like that in public. He would learn later that I screw up on such a regular basis that I never miss an opportunity to point out somebody else’s mishaps, just to divert some of the attention away from me. 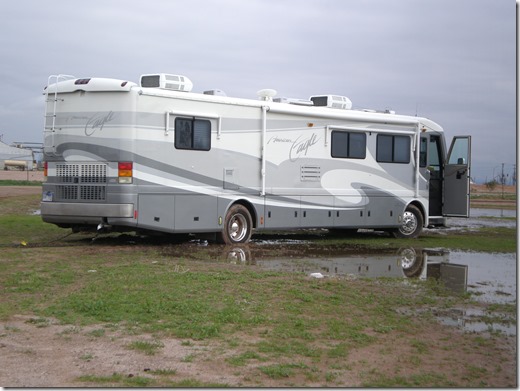 Fast forward to October, 2009, and Greg and Jan came to our rally in Celina, Ohio. I’ve always suspected that he came just to beat me up for dissing him in public about getting stuck in Arizona, but I always stayed in a crowd of people so I’d at least have witnesses. After the rally we went back to Elkhart Campground in Indiana and they were parked right behind us. If I were a paranoid man, I’d have been worried by then. But I’ve been shot by professionals so amateurs don’t worry me all that much. The wind blowing hard woke us up one cold, rainy morning and I discovered that the water heater in our Winnebago had stopped working. I went outside and slogged through the puddle that we were parked in, opened the water heater access door and confirmed that yes, it was still there, and had not fallen prey to a wandering band of water heater thieves. So much for the easy solutions!

I’m nothing if not resourceful, so I did the next logical thing. I walked over to Greg’s motorhome and banged on the door. I figured that if I was going to be standing outside, ankle deep in cold rainwater, somebody should keep me company! Greg came outside with me, stared at the contraption for a few minutes, scratched his head and a couple of other things, and said “Yep, you’re right. It’s broke.” Thanks a lot, guy! But then he tested this and tested that, and decided it was a bad thermo cut-out or some such thing and replaced it.

Well, I figured that even if he couldn’t drive across a field without getting stuck, a guy who could fix things and worked for free was worth having around, and the rest is history. That day set the pattern for our whole relationship. Here is Greg working on our motorhome’s batteries. 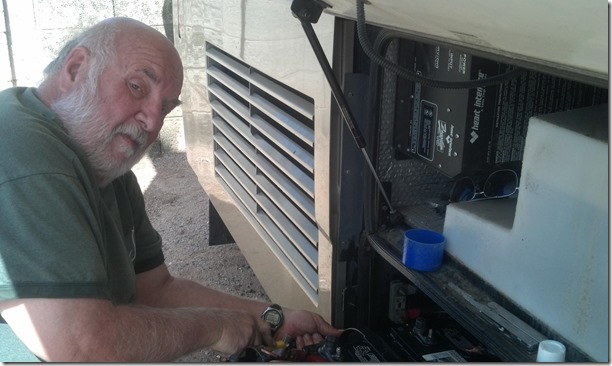 And here he is working on our leaking black water tank valve. That’s when you know who you’re real friends are! 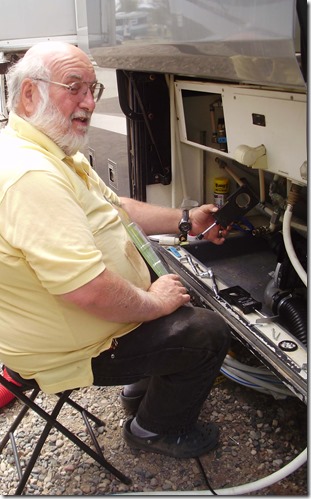 This one is Greg replacing a relay in our rig. Doesn’t he look like he’s wishing he’d just left that damned motorhome stuck in the mud and waded off into the sunset way back when? 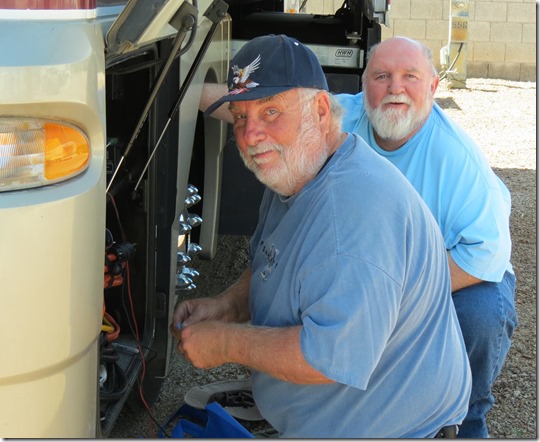 I know it’s not fair for Greg to always have to do all of the work around our place. When our sink sprung a leak, I had Miss Terry help him fix it. 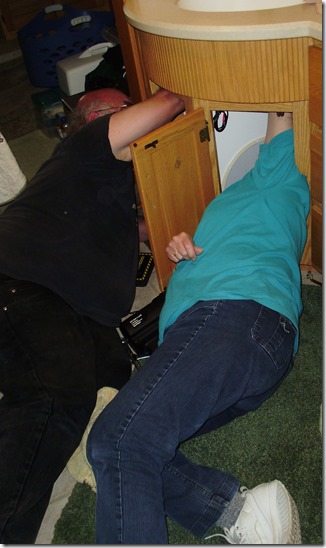 But it’s not like Greg spends everyday fixing things for me. Sometimes he fixes things on his own coach. A couple of years ago when we were parked at the Pima County Fairgrounds in Tucson, he pulled out of his site and forgot to unplug his 50 amp power cord, so he got to fix it. As I said above, I’m always quick to point out somebody else’s flaws. 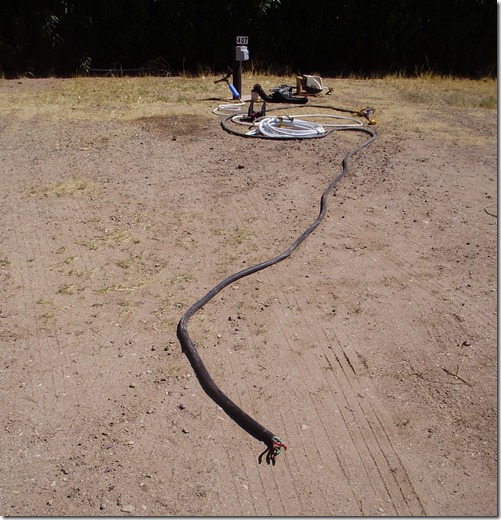 Here he is trying to convince me it’s really easy to do simple things like check the oil level on a diesel motorhome. At least that’s what he said, but what the hell is he planning to do with that electrical probe in his hand? Is that not a “who me?” expression on his face if there ever was one? 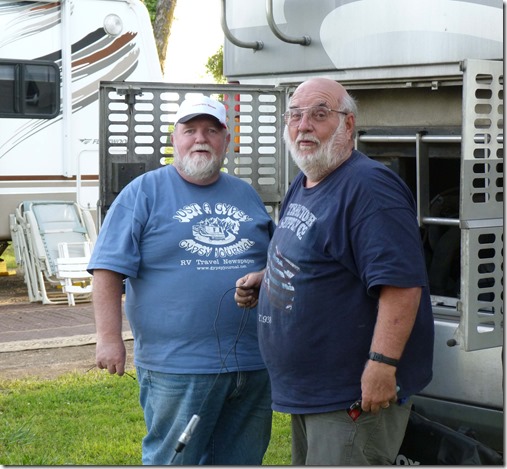 And sometimes neither one of us breaks anything, and then we have to find other ways to amuse ourselves. Here’s Greg and a bunch of other old goats. 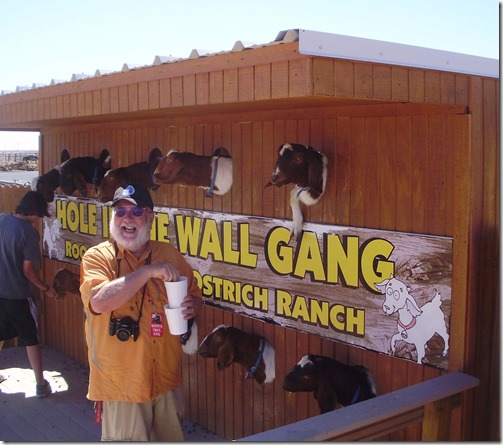 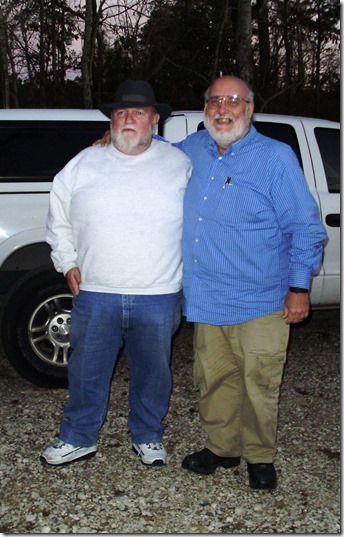 Okay, that walk down memory lane made me tired. Now it’s nap time. 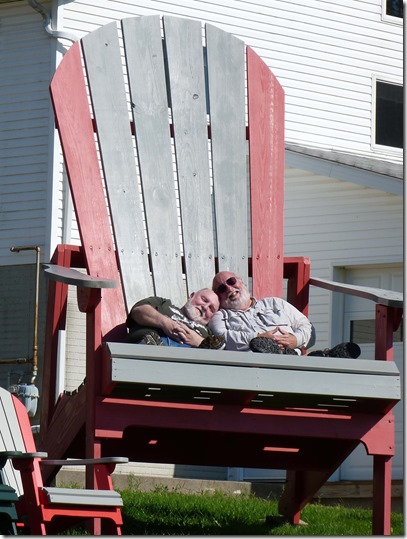 Thought For The Day – A friend will tell you, “That has to be the dumbest idea you’ve ever had.” A best friend will add, “Hang on, I’ll be right over. I want to try it too!”

A few readers have asked how long we’re going to be running our e-book special offer, because they don’t get paid until the weekend. No problem, I’ve extended it until Sunday evening. If you haven’t taken advantage of it yet, this is a heck of a deal. Normally our 7-in-1 e-book guides to free campgrounds, RV good guys, RV dump stations, fairgrounds camping, casino camping, favorite restaurants, WiFi campgrounds sells for $24.95, but for a limited time, we’re offering it with an added bonus, our new Hitching Post RV park reviews for just $20! This is our way of saying thank you to our readers for your support over the years, so get it while you can.

It’s easy to order yours, just log onto www.paypal.com and make a $20 payment to editor@gypsyjournal.net and the updated 8-in-1 e-book guide will be delivered right to your e-mail inbox.