As I reported a couple of days ago, the drum on our Splendide washer/dryer combo has stopped turning on our Splendide, though it has power and the pump runs. I assumed the belt had broken and called Westland Sales, the Splendide parts and service location near Portland. Sam, the tech I talked to there, was sure that the belt wasn’t broken, but that it had jumped off the pulley. He said that in ten years, that has always been the problem and that he has only replaced two belts in all that time. Sam assured me that once we got the unit out, I would see what he was taking about and that it was a pretty simple fix. Sam lied.

We pulled washer/dryer out yesterday, which first entailed taking the rear half of our Winnebago apart to get to it. Then we pulled the back off and discovered that the belt was not broken, but that it also had not jumped off. Now what.

You may be surprised to learn that, as incompetent as I am in most things mechanical, I do know a thing or two about electricity thanks to Jim Summers, my shop teacher at Libbey High School in Toledo, Ohio. In fact, I even wired our MCI bus conversion and didn’t burn it down or electrocute anybody in the process. The dryer belt is connected to a shaft that comes off the motor and to a pulley that turns the dryer drum. The pulley turns freely and the drum spins when I turn it, and the shaft from the motor also spins freely. No wires were disconnected and there was no sign of anything that had melted or shorted out. Okay, that’s the extent of my knowledge, now what? (Okay, I slept a lot in shop class, what can I say?)

I also told Greg that this whole gate guarding gig of his was damned inconvenient for me and that he really should be here doing all of this for me. But then he started talking about travel expenses, first class accommodations and per diem and I just let the whole thing drop.

Greg e-mailed me the Splendide service manual and talked me through a couple of tests, and we think we have the problem isolated, but I ran out of time. So today I’ll have another go at it.

We had several people stop over to visit us during the day and afternoon, including Ron Butler and his wife Carolyn Haven, David Schumaker, our neighbor Susan Pezzano, who brought us some fresh delicious homemade peanut brittle, and Dan and Jenny Sheppard. We have been at this so long that we have friends everywhere we go!

And with all of that going on, Miss Terry still found time to make the best pizza I’ve ever had in my life. And that’s saying a lot, because I love pizza! 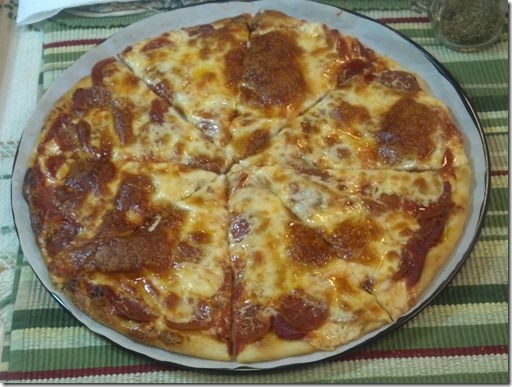 With so much going on around here, Bad Nick thought that he needed to do something to earn his keep, so he posted a new Bad Nick blog about respect. Check it out and leave a comment.

Speaking of Bad Nick and blogs, the old curmudgeon may have some competition in a blog I recently came across called Your Face Is Politics, and subtitled Intelligent discussion of politics without all the PC nonsense. Read their thoughts on gun control in the post Stop Pretending You Have The Answers, which is one of the best, nonbiased commentaries I’ve read on the subject. I’ll be checking in on this one often.

Yesterday my dear friend Chris Yust also finished the second proofreading and editing of my new book, Dog’s Run, and it is getting very close to being published. In the meantime, if you’d like a sneak peak of the book, which is set in a small town in Ohio in 1951, I posted the opening on my Facebook author’s page at https://www.facebook.com/NickRussellAuthor

Thought For The Day – Walk away from anything or anyone who takes away from your joy. Life is too short to put up with fools.