Historic Astoria, Oregon, located near the mouth of the Columbia River, is one of our favorite small towns. Over the years, we have spent many happy hours exploring the eclectic shops in the business district, visiting the historic sites, enjoying the views from the Astoria Tower, and just driving the hilly streets admiring the neat old houses. But one thing we had not done before was ride the Riverfront Trolley. So after spending some time shopping at the Sunday Market yesterday, we crossed it off our bucket list.

This is probably the best entertainment value you’ll ever find; for $1 you can board the trolley and ride it as long as you care to, or for $2 you can get an all day pass that allows you to get off and back on as many times as you want. The round trip run takes about an hour. 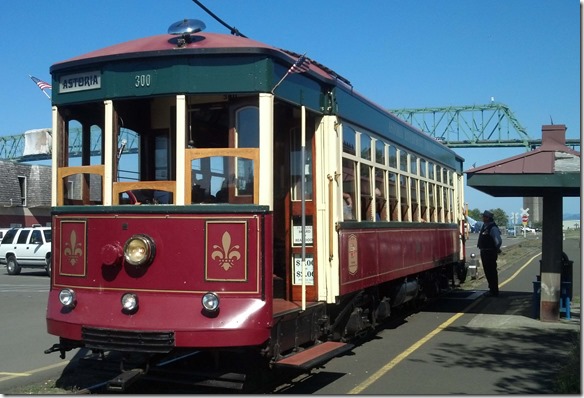 The electrically powered trolley, known as Old 300, was built in 1913 by the American Car Company in Saint Louis, Missouri for the San Antonio, Texas streetcar system, and was in operation there for 20 years. When the city turned to bus service in 1933, the San Antonio Museum of Art acquired the trolley and displayed it for many years. Eventually it made its way to Oregon, where it carried passengers on the Willamette Shore Trolley Line in Portland for several years before going into storage.

In December, 1998, the trolley was brought to Astoria on a five year lease for $1/year, and underwent a $40,000 renovation. Most of the money came from donations and the work was all done by volunteers. In 2005 it was purchased outright, and today it has become one of the most popular tourist attractions in the region, carrying thousands of passengers every year who come from all over the world to ride along Astoria’s historic waterfront. Instead of the traditional overhead lines used in the golden age of trollies, today a diesel generator creates power to drive Old 300’s electric motors.

A two-man volunteer crew, a motorman and a conductor, welcome passengers aboard and give a narrated tour along the three mile line, pointing out the sites of old canneries, fishing boats unloading, Coast Guard cutters, and sea lions lounging on the old docks that once served a thriving fishing fleet. Several movies have been made in Astoria, the two best known being The Goonies and Kindergarten Cop, and the conductor pointed out several buildings that were used in the films. Our conductor said that volunteers are always needed, so if you find yourself in the Astoria area and want to be part of the action, they’ll make you welcome. 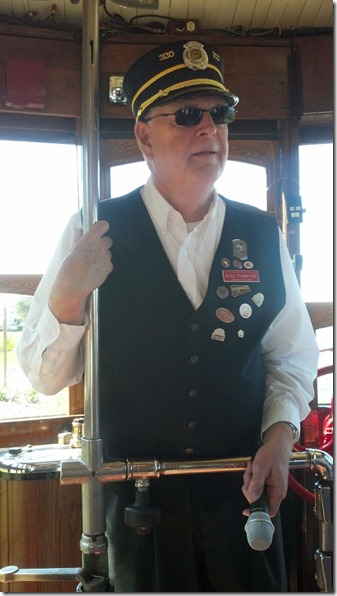 Passengers can board the trolley at several stops along the route, which have benches and shelters. But this is a very informal operation, just wave a dollar as the trolley passes by anywhere along the line and they will stop and pick you up.

The trolley is enclosed, but there is no air conditioning, and the wooden seats can become a little hard on the tush after a while. At the end of the line, passengers stand up, flip the seatbacks over to face in the opposite direction, and are ready for the return trip. 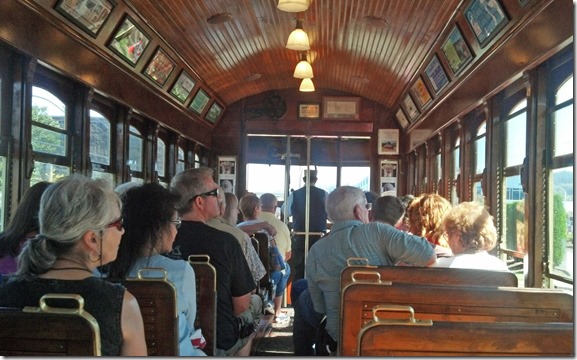 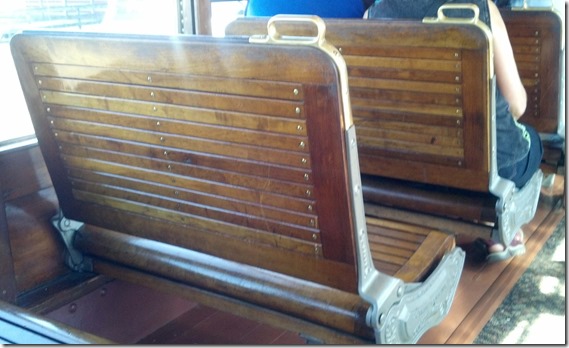 We enjoyed riding the trolley, and I’m sure we’ll do it again when we’re in Astoria. I think if you try it, you’ll like it and come back too. The Astoria Riverfront Trolley runs from noon to 6 p.m. daily May – September, weather permitting. For more information on the trolley, call (503) 325-6311 or visit their website at http://www.old300.org.

3 Responses to “Riding The Trolley”