Nick's Blog » Off To A Good Start

I was out of bed and ready to greet the world by a little after 7 yesterday morning, for the second day in a row. I had the low tire on the Explorer aired up, took the trash down to the dumpster, dumped our black tank, stepped in dog poop, and pissed the neighbor off, all before 8 a.m. When you can do all that, you know it’s going to be a good day!

I’m not sure what the problem was with the neighbor. They had only been here a couple of days and I had not talked to him before, but you know me, I’ve never met a stranger. He was standing there with the dog on a leash waiting for it to do its business and when I saw that he had unhooked his campground utilities, I said something like “It must be time to move on down the road” and he just said yeah. “Where you going?” I asked and he said “Down the road.” I should have taken a clue from that, but silly me, I noticed his Florida license plates and asked where he was from in the Sunshine State. “Do you have some deep seated need to ask me questions?” he shot back. Ouch! He must be in the witness protection program or something. (At least it wasn’t his dog’s crap I stepped in.)

The good news is that the new neighbors who moved into the same spot are nice. Terry left a little after 9 to go to her weaving lesson in Astoria, and a little later I noticed a couple standing outside our motorhome looking like they needed something. I went out to ask them what was up and they said they had just arrived and wanted to know if we could change electrical plugs. The utility pedestals here at the Long Beach Thousand Trails preserve are weird, and two RVs parked back to back share the same power pedestal, each of which has a 30 and a 50 amp outlet. When we arrived here nearly three weeks ago there was another motorhome parked behind us and plugged into the 50 amp outlet so we used our dog bone adapter and took the 30. No problem, we can get by just fine on that. The next couple of rigs just plugged into the 50 amp outlet, but these people have a travel trailer with a 30 amp power cord and he didn’t have an adapter to use the larger outlet. No problem, I turned off our computers, went outside and switched, and life was back to normal.

They are kind of new at all of this, and like most newbies they had a few questions, including the one about their holding tank monitor showing that they were full even after they had just dumped. I explained that those things never worked so don’t waste a lot of money on all of those treatments that are supposed to keep the sensors clean. “Just ignore them and remember my rule,” I advised them, “when you flush the toilet and your butt gets wet, it’s time to dump.” It wasn’t until later that I learned that my new neighbors are a minister and his wife.

But at least the sun was shining for a change yesterday. Not that it did me any good, since I spent the entire day at the keyboard. I did over 6500 words and I think I’m closing in on the end of my new book. I’m not there yet but it’s just over the horizon. I’m not exactly worried, but I do wonder how my regular readers are going to react to this one. It’s still a mystery, but it’s much grittier than the Big Lake series. Stronger language, a bit of sex (though not explicit) and reference to two rapes. But the story is what it is. I guess I’ll know when it gets published.

Terry got back from her class about 5, and while it was not all that she had hoped, she did learn some new things, and confirmed some things that she had already taught herself. And she made this beautiful wool and mohair blend scarf. 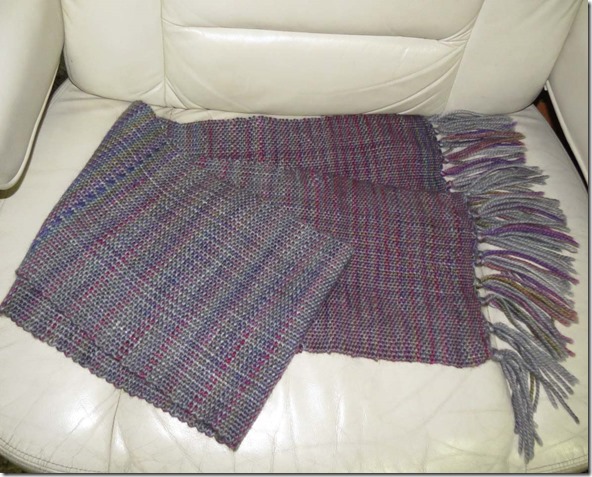 As if that wasn’t enough of an achievement for one weekend, she then made a delicious fried chicken dinner that was so luscious words cannot describe it.

I think I’ll sleep in today. I can’t get up that early three days in a row, it upsets the balance of nature.

Thought For The Day – I hate when I’m about to hug someone really sexy and my face hits the mirror.

10 Responses to “Off To A Good Start”