Terry and I have been traveling around the country fulltime for fifteen years now and have seen a lot of sights, but we’ve always said that no place is more beautiful than the Oregon coast. We’ve driven it several times over the years and we’re still awestruck every time we do.

We took advantage of another beautiful day yesterday to drive the 50 miles from Newport down to Florence, which is one of the most spectacular stretches of the coast. Even though we’ve seen it many times, we still find ourselves saying “wow” around every bend in the road. Terry is an excellent photographer, but even she and her Canon SX40 digital camera cannot do justice to the natural beauty to be found here. 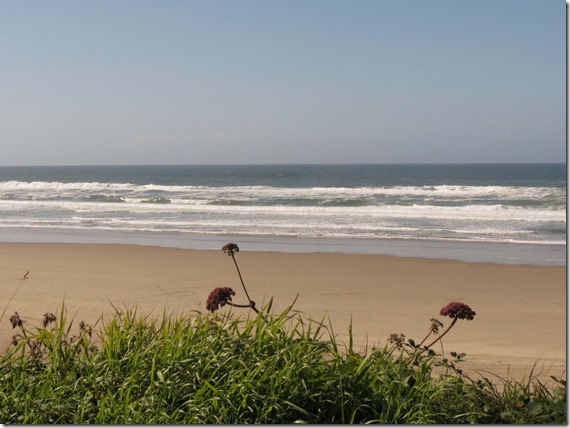 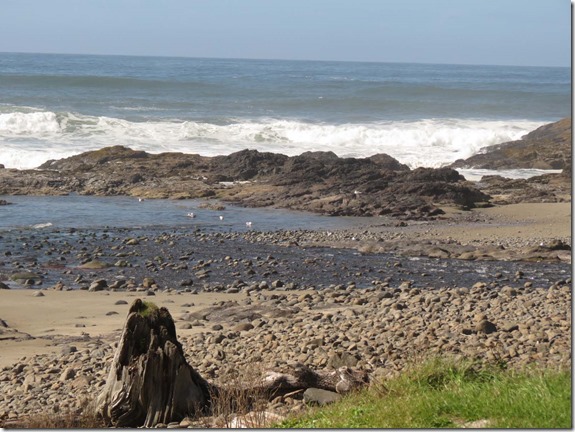 U.S. Highway 101 through here is in better shape than it is between Seaside and Newport, but it’s still not a fast route. There are lots of curves, some short climbs, a tunnel, and some bridges to contend with. But what really takes time are the miles of unspoiled beaches, rocky headlands, surf crashing on dramatic rock formations, lighthouses, and charming little beach towns that will have you pulling off the road to stop and take pictures and just enjoy everything around you. Fortunately, there are plenty of pullouts along the way, and several of them will accommodate a large RV. Take your time and stop often. You won’t regret it. 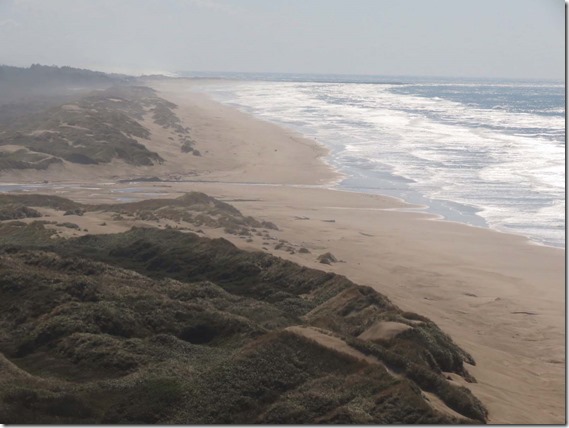 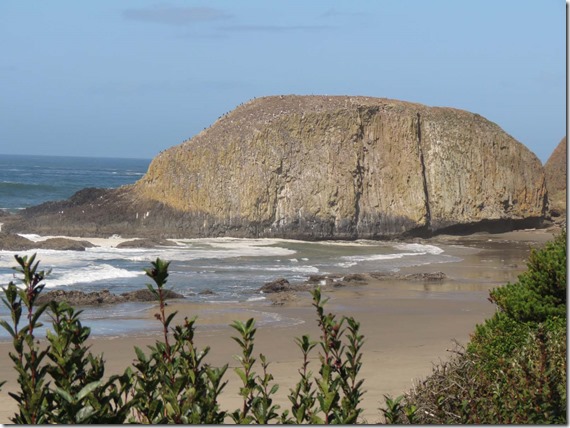 You can spot seals and sea lions lounging on the rocks offshore at just about every pullout along the way. And if you’re lucky, you may see a grey whale making its way along the coast, too! 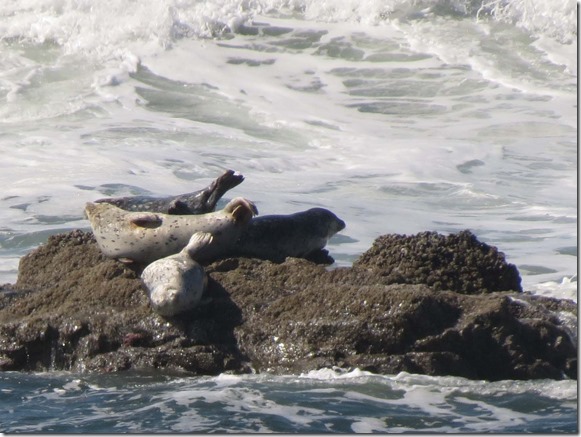 A block west of the highway, at the corner of Third and Pontiac Streets in Yachats, is the historic Little Log Church, built in the shape of a cross from local timber, and dedicated in 1930. The church served the community for generations and today it houses a nice museum of local historical artifacts as well as contemporary artworks on loan as exhibits. It is still regularly used for weddings, memorials, and special events. 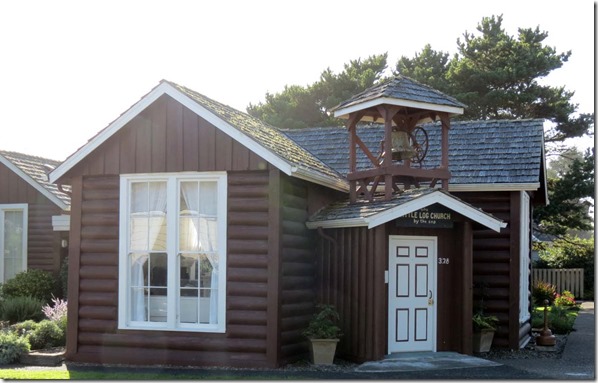 Located on a cliff with a magnificent view of the Pacific Ocean, Heceta Head Lighthouse is one of the most photographed lighthouses in the United States. Built in 1894, it is still a working lighthouse and the brightest light on the Oregon coast, casting its beam 21 miles out to sea. A short trail from the parking area leads to the historic lighthouse and assistant keeper’s house. 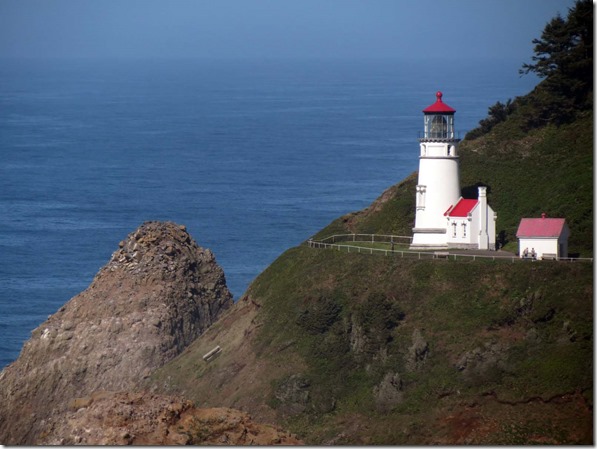 A short distance away, Sea Lion Caves has been a popular tourist attraction since the early 1930s. Visitors can take an elevator down to water level to see the world’s largest sea cave and its resident Steller sea lions. 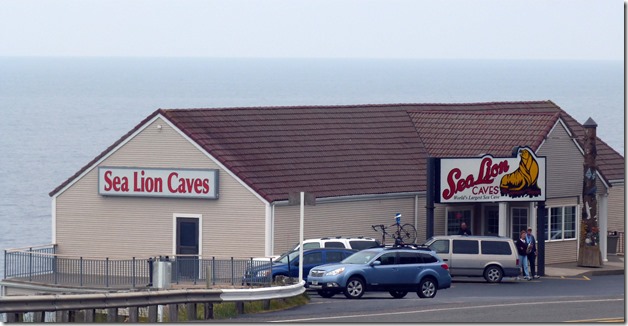 This is timber country and they have some seriously big trees around here! 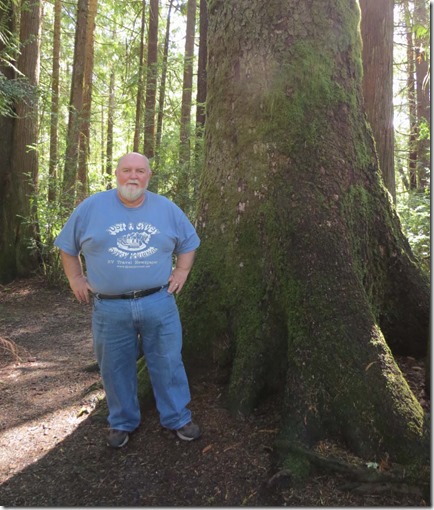 We stopped at the South Jetty Thousand Trails preserve to check it out, and I was pleasantly surprised to discover that I had a decent 3G Verizon signal and was able to get online with my smart phone. When we came through here a couple of years ago the signal was terrible. The campground is heavily treed, which makes getting a satellite TV signal difficult in many sites, but the woman on duty at the ranger station told us they will be thinning trees this winter, which should help.

By the time we got back to Newport it was late in the day and our stomachs were growling. Our friends Dan and Patty Chance had recommended the fish and chips at the South Beach Fish Market a mile or so south of the bridge into Newport, so we decided to check it out. And we’re glad we did! What the place lacks in ambience it more than makes up for with delicious food.

It supposed to start raining again today, and high winds are predicted. So we’ll play it by ear and see what we do. The plan is to head inland Saturday or Sunday, and there are a couple of places we want to get back to before we leave the area.

Thought For The Day – I have found that if you love life, life will love you back. – Arthur Rubinstein

One Response to “Cruising The Coast”