Occasionally when I have nothing new to share with you, I will recycle an old story from a previous issue of the Gypsy Journal to give you an idea of some of the interesting things we have seen in our travels.

We found a wonderful attraction in the charming small town of New Bremen, Ohio, the Bicycle Museum of America. Located on New Bremen’s main street, the museum is a treasure trove of bicycles and bicycle memorabilia dating back to the early 1800s. Here you will see everything from primitive bikes with appropriate names like the Boneshaker, to high wheeled bicycles that the gentry of another age enjoyed, to modern carbon frame bicycles that one can lift with a single finger.

The museum, one of the largest private collections of bicycles in the world, was the brainchild of Jim Dickie II, of the Crown Equipment Company, which is located in New Bremen. Crown is a leading manufacturer of forklifts and other material handling equipment. In 1997, Dickie purchased the extensive Schwinn Bicycle Collection, which was previously located at the Navy Pier in Chicago, and moved it to New Bremen. The museum opened its doors on July 25, 1997.

Housed in a beautiful old gingerbread storefront, visitors to the museum are greeted with a friendly staff eager to share the stories of the hundreds of bicycles on display. A visit begins with a short video on the museum and the different types of bicycles included in the collection. From there, visitors can explore two floors of beautiful bicycles and see hundreds of examples of antique bicycle club badges, bicycle safety equipment, and bikes that will both delight and amaze. 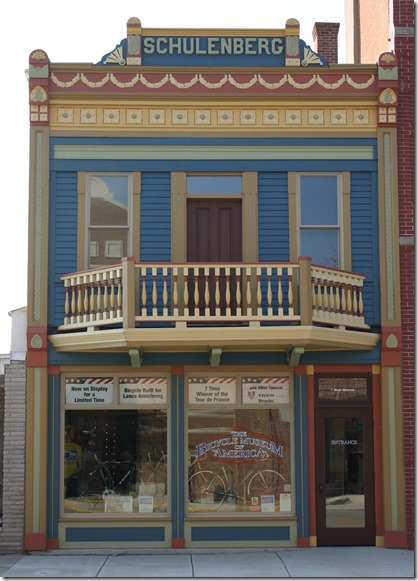 The oldest bicycle in the collection is an 1816 Draissine, which consisted of two wooden wheels connected to a wooden beam. The rider straddled the beam and propelled himself with his feet against the ground, steering with the front wheel while leaning his forearms on an upholstered balancing board to maintain equilibrium. A brake on the rear wheel could be activated by pulling a leather cord attached to the balancing board. The Drassine was more a nobleman’s folly than a serious mode of transportation, but it was one of a long line of inventions that eventually led to the modern bicycle. 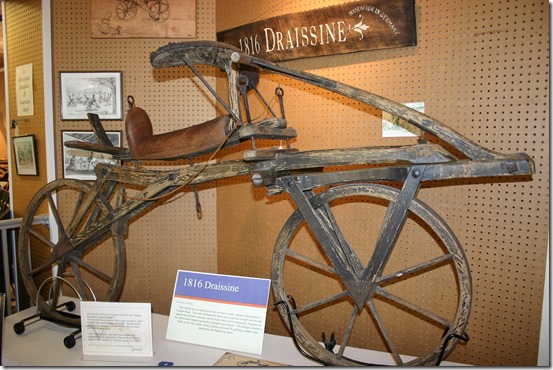 Big strides were made in bicycle design by the 1870s when the Shire Boneshaker, with its large wooden front wheel and pedals, was introduced. 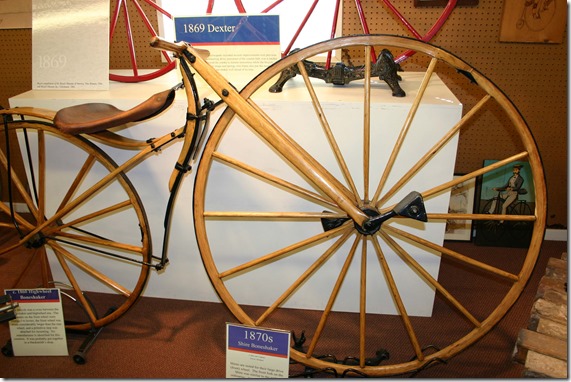 By the 1880s, high wheel bicycles, some with wheels as tall as 60 inches, were all the rage, and the museum has an extensive collection of this style of bikes to admire, including a beautiful 1889 Eagle. With this design, the larger the front wheel, the faster the bike could go. 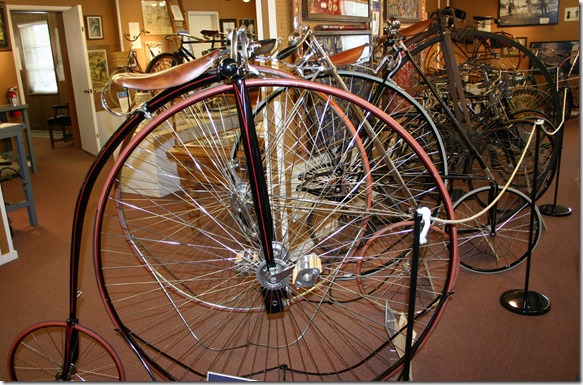 Bicycles were not just playthings or toys for the well to do. Throughout history they were used for commercial purposes ranging from delivering messages to parcels, and as hired transportation, to carrying policemen on patrol. They also saw military service. The museum has an excellent example of the 1891 Columbia Light Roadster, more commonly known as “the soldier’s bicycle.”

Among the museum’s many bicycles are some real oddities, including an 1895 Schwinn World Triplet that could carry three riders at once. Another rare bicycle on display is the 1896 Schwinn Family Tandem, designed to carry two adults and a child in a special carrier between the riders. This bike was built for Mr. and Mrs. Ignaz Schwinn and their son Frank, who would grow up to become president of the company. 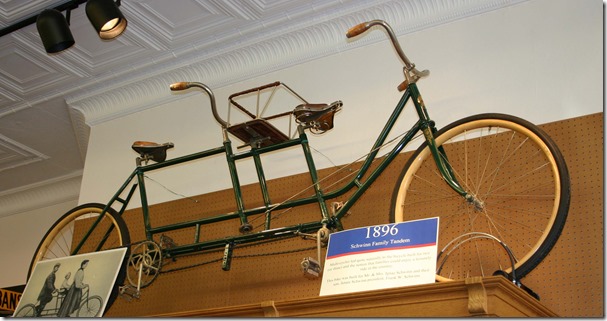 Another rare bicycle on display at the museum is the Schwinn Paramount Racer, sporting a huge 57 tooth sprocket. Riding this bike on May 17, 1941, Alfred “the Red Devil” Letourner set a world record when he achieved a speed of 108.92 miles per hour. It took three miles to get up to speed and then four miles to stop! 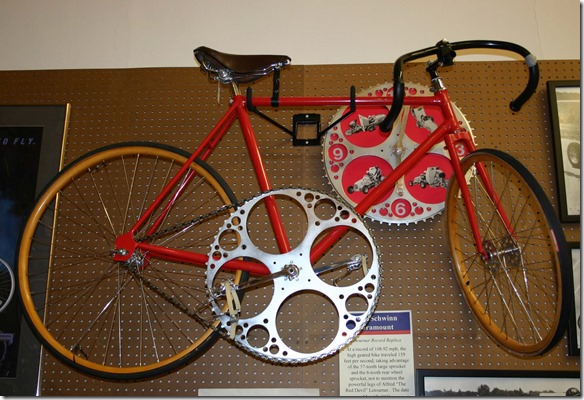 Museum visitors can take a ride down memory lane with all of the nice bicycles dating from the 1950s and 1960s. Do you remember special edition bicycles, such as the Hopalong Cassidy model, which came complete with cap pistols and a headlight to search out those rustlers and other bad guys in black hats? 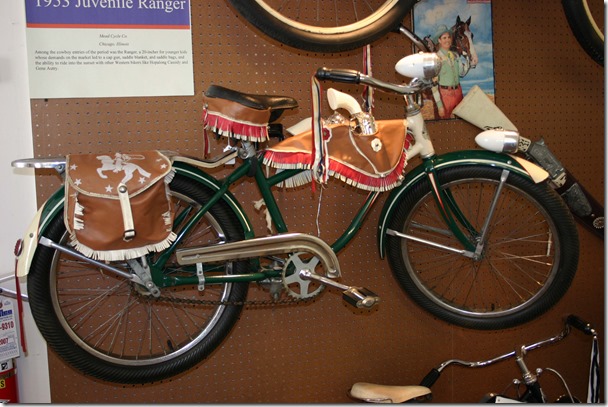 Moviegoers will surely remember the modified 1940s Schwinn, christened the “X1 bicycle,” that was ridden by actor Paul Herman in the 1985 movie Pee Wee’s Big Adventure. 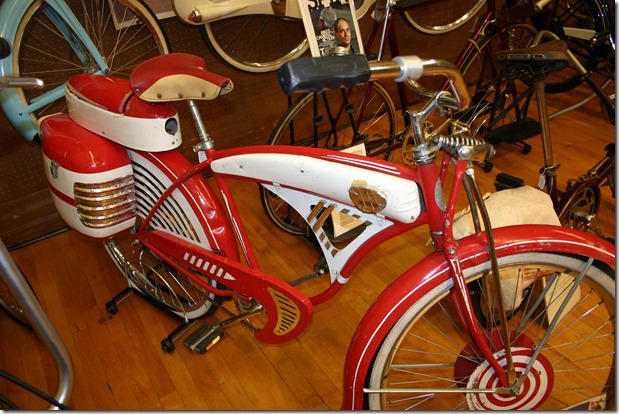 Whatever your interest, from elegant antique bicycles from the 1800s, to the balloon tire classics of the 1940s and 1950s and even the banana seat high rise handlebar bikes of the 1960s, you’ll find it on display at the Bicycle Museum Of America.

Though the bicycle museum is probably New Bremen’s main tourist attraction, be sure to spend a few minutes checking out the restored lock from the Ohio and Erie Canal, located next to the bicycle museum. At one time New Bremen was a major stop on this inland waterway that was built to help move goods from Lake Erie to the Ohio River.

The Bicycle Museum Of America is located at 7 West Monroe Street in New Bremen and is open Monday through Friday from 11 a.m. to 5 p.m. and Saturday from 11 a.m. to 2 p.m. There is a small admission fee. The museum’s parking lot will not accommodate larger RVs, but you should be able to park on a side street within walking distance. For more information, call the museum at (419) 629-9249.

6 Responses to “Bicycle Museum Of America”