Nick's Blog » On The Waterfront

A few days ago I wrote about a teenaged girl who was throwing a tantrum here at the Long Beach Thousand Trails preserve when she arrived with her parents and discovered that the cell phone data connection here is so bad that she couldn’t text her friends. I also wrote a Bad Nick blog post about it titled One Butt Whipping To Go.


Apparently the little brat got her way, because even though they were supposed to stay for two weeks, they have packed up and left. And that’s probably for the best. After all, she was absolutely going to die if she couldn’t text!

The good news is that one of my Facebook friends, Barb Thibert, from Concrete, Washington, is now in their space. Yes, there really is a town here called Concrete. There is also a town in Washington named George. I wonder where they got that idea? It was nice to have the chance to meet Barb in person.

Yesterday was a fun and busy day. We started out by going to the craft bazaar at the Long Beach Grange building, where we met Tom and Cora Irving. Tom is the 92 year old gentleman who makes socks on an antique circular sock knitting machine like the one Terry has that I wrote about in yesterday’s blog.

They were a very nice couple, and Tom had a bunch of his socks on display for sale. I sure hope Terry masters that machine of hers soon, because they looked really comfortable! He gave Terry some tips and confirmed to her that what she’s been doing with her machine is right, and that she just needs more practice to master it.

From the Grange we drove a couple of miles to Ilwaco for their Market Day, which we understood was a farmers market, but was actually more an arts and crafts fair, with three or four produce vendors scattered among the stalls selling framed nature photographs, walking sticks, aromatherapy oils, and such.

The vendors were on the waterfront so we had a good time wandering around looking at all of the stuff being offered. We bought some delicious wild berry honey, and Terry found some produce she wanted, too. The Port of Ilwaco is a busy place and I enjoyed looking at all of the boats in the marina. There were also lots of people with friendly dogs, so I got some puppy fixes. 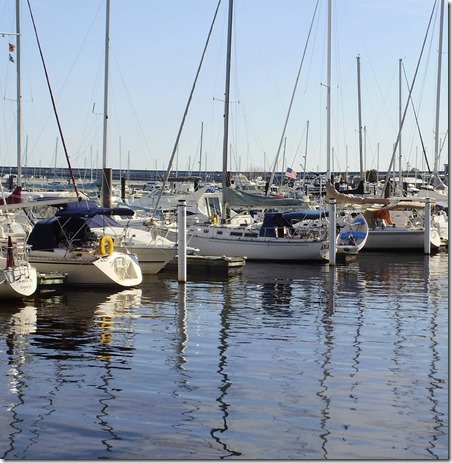 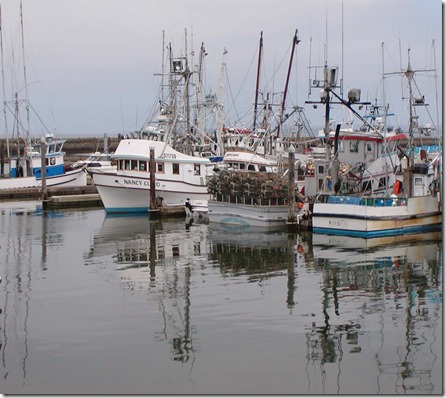 We stopped at a very nice little shop called Time Enough Books and spent an hour or so browsing, and Terry found a book on knitting patterns and techniques. She’s been crocheting for years, and has recently been teaching herself to knit, in addition to learning to spin, weave, and the sock machine thing. She managed a couple of lessons here and there on some of it, but most of what she’s learned has been from books, DVDs, and You Tube videos. Yes, you can live in an RV fulltime and still enjoy your hobbies!

We were visiting with the shop’s owner and discovered that she and her husband have a fifth wheel trailer, which of course turned the conversation to RVing. Like a lot of people we have met, she didn’t think fulltiming was for them, but was very interested in our lifestyle. That’s okay, it isn’t right for everybody. And that’s probably a good thing or we could never find a site at our favorite campgrounds!

All of that activity made us hungry, so we stopped at the Imperial Schooner, a small restaurant on the waterfront that serves some of the most delicious fish and chips we’ve found anywhere. I hope you all enjoy reading about the great places we find to eat around the county, because it’s sure hell on my waistline and wallet! But I do it because of my dedication to you folks. Yeah, let’s go with that, okay? It makes me sound so darned noble!

Today we’re going to go to Astoria to check out their Sunday Market. Terry went there a couple of years ago with Jan White and Diane Melde and it was very good, so she’s been looking forward to going back.

Thought For The Day – Sometimes my greatest accomplishment is keeping my mouth shut.

4 Responses to “On The Waterfront”