The only thing more fun than going to the kite festival here in Long Beach is to go with longtime friends. So that’s what we did! And what fun it was!

Yesterday our pals Tom and Barbara Westerfield drove up from the campground where they are staying at in Barview, Oregon to see us. They arrived about 10 a.m. and we left our Explorer here at the Thousand Trails and took their Jeep. This is a different one than their previous toad, and it has the biggest sunroof I’ve ever seen on a vehicle. You can put an entire film crew up there to record your travels!

We drove in to Long Beach and showed them the World’s Largest Frying Pan. Actually, five other towns also claim to have the World’s Largest Frying Pan, including Brandon, Iowa and Rose Hill, North Carolina. I haven’t seen the others, but this puppy is huge at 9 feet 6 inches in diameter, not counting the handle! It would take a whole flock of chickens to lay enough eggs to fill it. 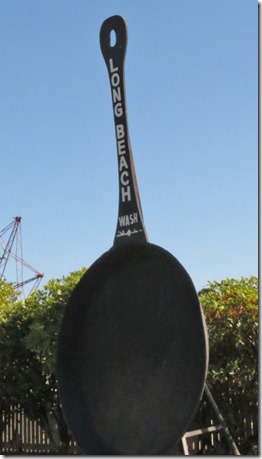 Next we made a stop at a kite shop, where I almost bought one of the Prism Snapshot 1.9

kites I flew the other day, but I managed to talk myself out of it. I really need to spend my time writing instead of playing.

I guess just looking at that big old frying pan made us all hungry, so we drove a couple of miles south to Ilwaco for an early lunch at the Imperial Schooner, where the fish and chips were delicious. It was fun to catch up on all of our RV adventures since we were together last, everybody talking a mile a minute.

Ilwaco is about the only place on the Long Beach Peninsula where you can pick up a Verizon signal, and even then it is flakey and unreliable. Barb was able to get on long enough to find a geocache right next door, so we stopped to find it when we left the restaurant.

Then we drove back to Long Beach to the kite festival. They said the wind was less yesterday than the day before, and it was supposed to be a few degrees warmer but it sure didn’t seem that way! That didn’t stop Tom from wearing shorts and a T-shirt while the rest of us were shivering. As my dear old Dad used to say, “That boy ain’t right!” 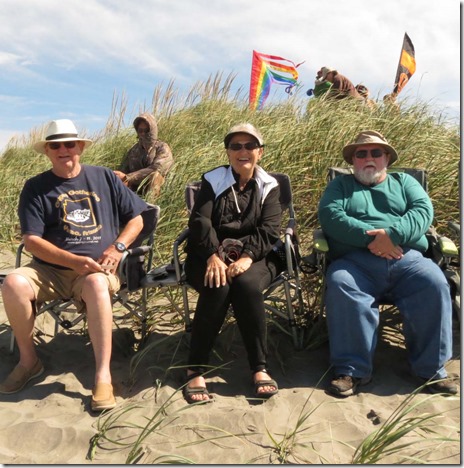 The weather didn’t stop the dedicated kite fliers though, and it seemed like there were more colorful creations flying overhead than on Tuesday. 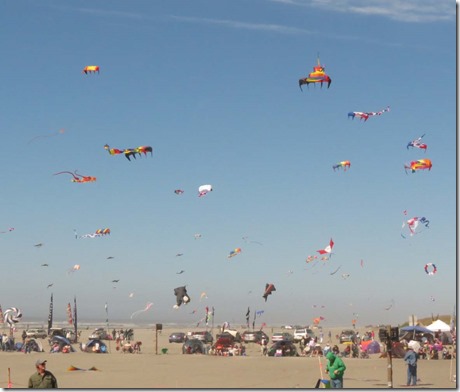 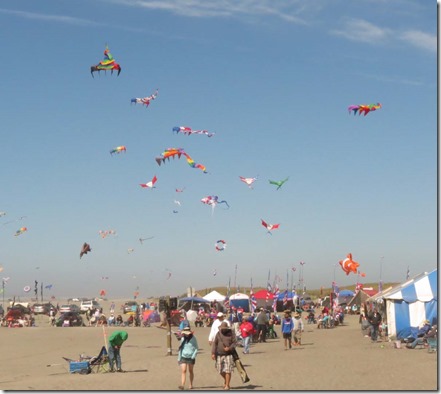 There was more team formation flying, more Rokkaku aerial battles, and the highlight of the day was when fliers performed elaborate aerobatics choreographed to music. Wow! It must take years of practice to get that good! 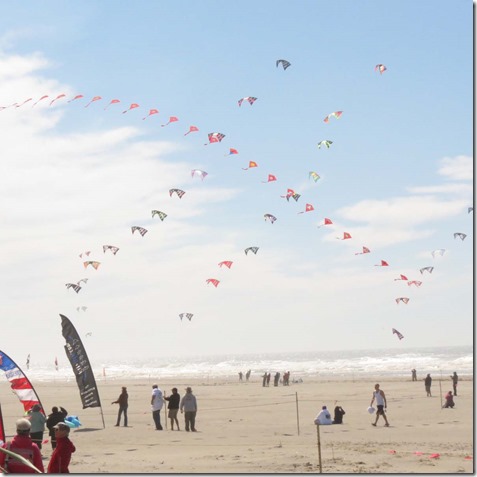 About 5 p.m. the activities wrapped up for the day, and I guess all of that shivering had helped us work up an appetite, so we went to a nice Mexican restaurant called El Comprade for dinner. Then we drove back to the campground and visited for another half hour or so before Tom and Barbara headed out after a round of hugs all around. It was nice to have a day with good friends, and we know we’ll see them again soon somewhere down the road.

Thought For The Day – A negative mind will never give you a positive life.

One Response to “Kites + Friends = Fun”