It was just as well that I spent the weekend working on the new issue of the Gypsy Journal because it was gray and cold, and breezy at times. When I walked down to the dumpster to throw away the trash yesterday I was glad to bet back inside. I lived here on the Washington coast for several years, but I was much younger back then and it didn’t seem to bother me too much. Now, between the cold damp air and working on the paper all day long, my arthritic hands are telling me, “You’re not a kid anymore.” I don’t plan to ever grow up, but I have a sneaky suspicion I may be getting just a little bit old.

By the time I knocked off last night I had eleven pages done, but today I’m going to take a break long enough to run to the post office and mail some orders out that Terry put together over the weekend. I’ve got cabin fever and need to get away from my desk for a while. But like they say, what doesn’t kill you makes you stronger, right? Or maybe not, as this sign states. 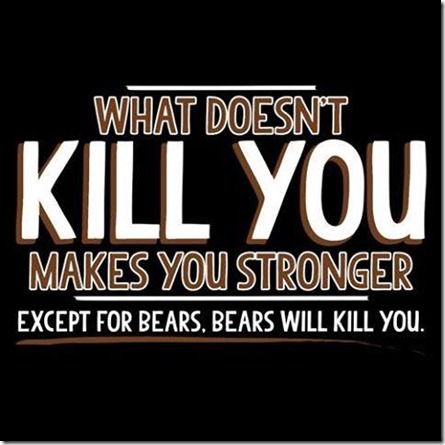 Speaking of signs, here is one I saw in a book shop in Port Angeles last week that I liked. There was a time when people said television would kill radio, and that the internet would kill television. Yes, those things changed, but they are still around. 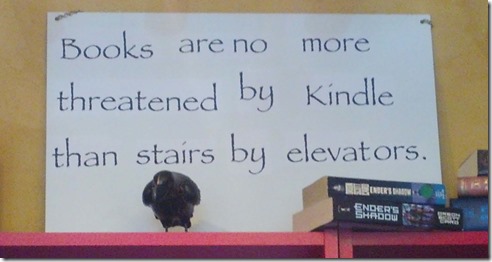 We didn’t need any kind of electronic entertainment to give us a chuckle yesterday. Usually at a campground, all of the weekend campers leave on Sunday to go back to their homes and jobs. But for some reason, we had a line of RVs arriving all day long, and it was obvious that some of them really needed a lesson or two from the RV Driving School. I swear the driver of one big rig that parked near us put an extra three or four miles on his motorhome getting it into his long pull through RV site, even though there was lots of room all around. Yes, we were newbies once too, but I’m just shallow enough to gloat over the trials and tribulations of others whenever I can.

I also spent some time over the weekend reviewing more chapters of the audiobook version of Big Lake Lynching that my narrator, Bruce Miles, uploaded. As with the first book in the series, Big Lake

, Bruce is doing an excellent job and it’s moving right along.

Speaking of books, if you’re a Nook e-book reader, some of my author friends have put together a new anthology titled End of the Road that is free on Barnes & Noble. Check it out and download a copy.