We left the Oceana RV Resort in Ocean City, Washington yesterday morning at 10:30 and set out on our 95 mile trip to the Long Beach Thousand Trails preserve. Though it was a relatively short distance as RV trips go, I knew it wasn’t going to be a fast one. And I was right.

We drove through Hoquiam and Aberdeen, crossed the Chehalis River and took U.S. Highway 101 south into the hilly country between Grays Harbor and Willapa Bay. This is beautiful country, with lots of pretty views. 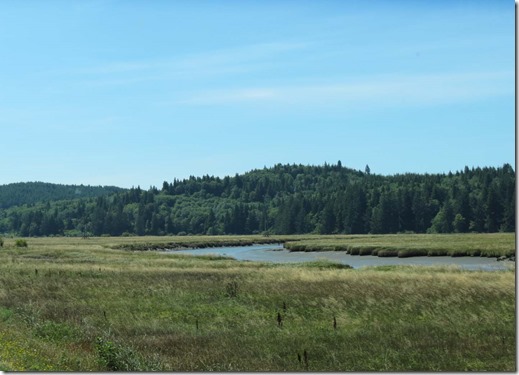 This is a challenging road in a big rig, with lots of sharp curves marked at 30 or 40 miles per hour, and a few down to 25. The sections in these pictures have decent shoulders, but for much of the trip there are no shoulders at all, and sometime even steep drop-offs. It’s not a place to be a speed demon. 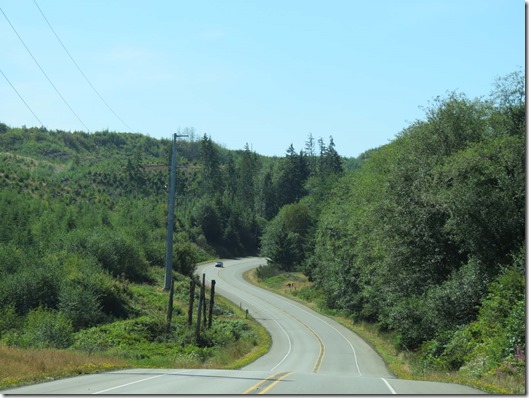 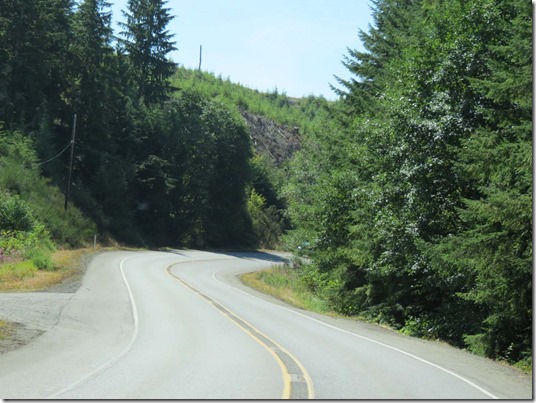 Of course, that doesn’t slow down the log trucks a bit. Back when I was in the newspaper business in this part of the world, I covered some horrific fatal accidents where truckers ran over other vehicles that didn’t got out of their way fast enough. 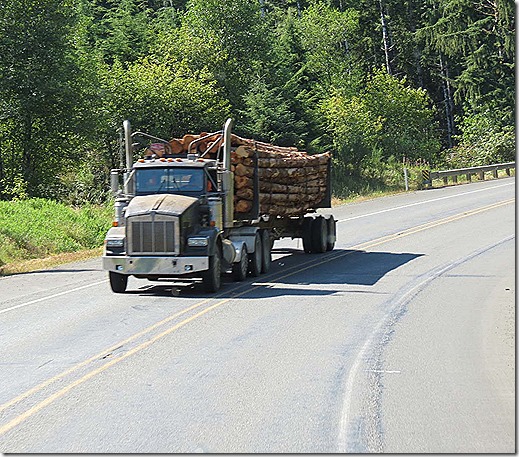 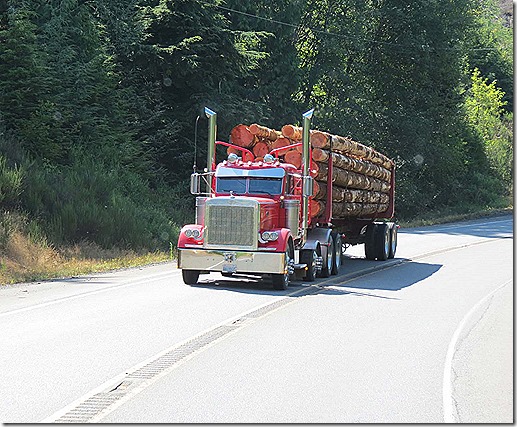 And we saw a couple of places where the road had caved in and been repaired. 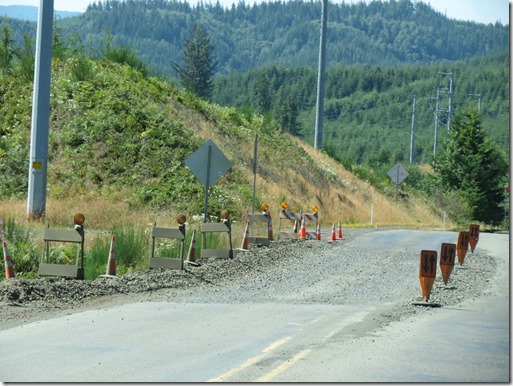 Speaking of logging, a lot of critics talk about how it destroys the forest. Not in this part of the country. This hillside was cleared in late 2007 after a storm leveled miles of trees, and then replanted. Look at it now. Those trees are six to ten feet tall already. Places that were clear cut when I lived here in the early 1980s are now heavily forested and ready to be harvested again. 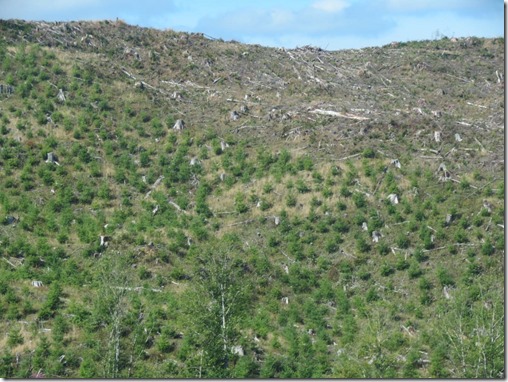 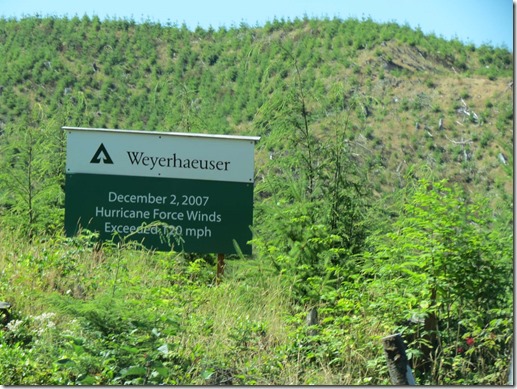 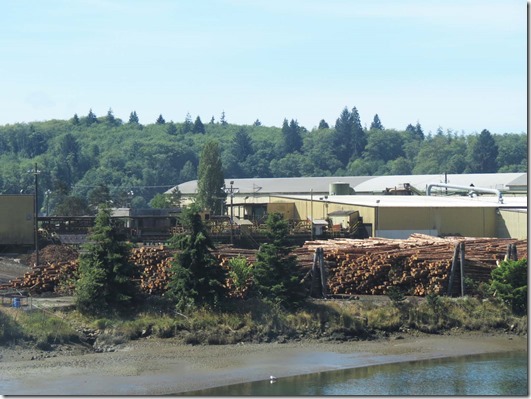 Then the road began following the shore of Willapa Bay, known for its oyster industry. But at low tide, all there was to see was lots and lots of mud. 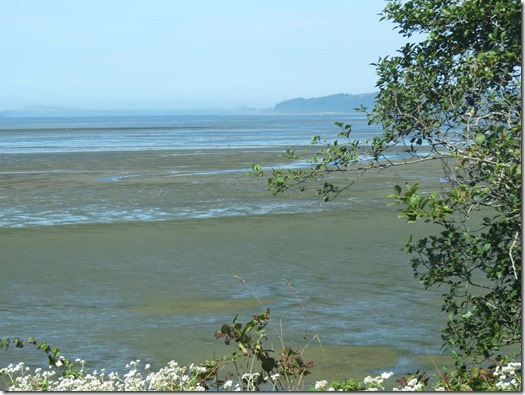 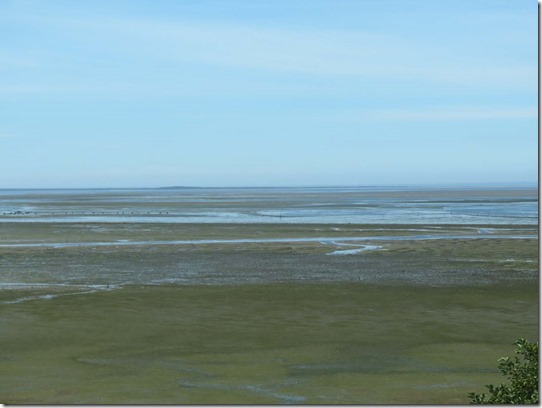 There were several oyster docks with boats waiting for enough water to go back to work. 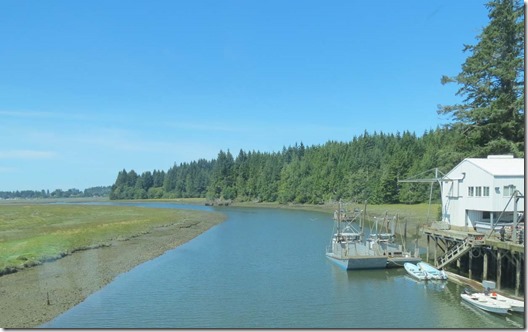 A couple of miles outside of Raymond we pulled into a parking area for a potty stop and this fellow came in from the other direction with steam billowing out from under his hood. I thought he had blown a radiator hose, but as it turns out, a section about four inches long on the inside face of the plastic radiator (Yes, plastic! We had one in our Ford van too!) where the hose leads from the radiator to the coolant recovery tank, flew off. Not the hose or the connection, the entire section of plastic came off completely! I’d never heard of that before. 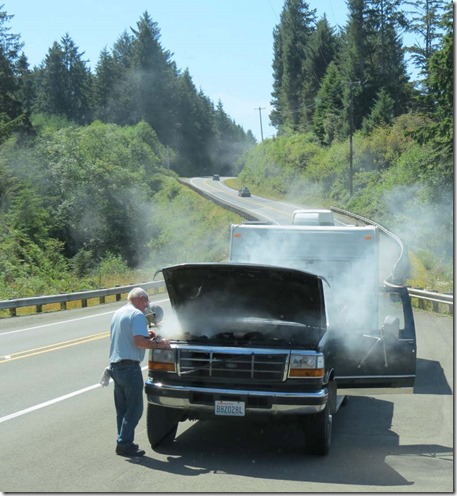 I asked if he needed a ride back into town, but he said he was fine and he had already called Good Sam road service. He said he had been paying for it for over 20 years and only needed it once before, but I think he was glad to have it.

A little over 2 ½ hours after we started out, we arrived at the Thousand Trails, which is packed. But we managed to find a site that would accommodate our 40 foot Winnebago and got backed in, after two people moved their vehicles to give me room to maneuver. It’s very tight here!

To add to the problem of things being busy and the tight RV spaces, there are two or three empty sites that people had parked their cars in to save for friends who had not yet arrived. So later in the day we saw two rigs dry camping while sites are empty and being saved. That’s unfair to others and against Thousand Trails rules, but one fellow who was upset about it said he complained to the ranger and got a shrug of the shoulders in response.

There are also half a dozen tents in one area, and this sign is posted just a few feet away from their nylon shelters. Sleep well, folks. 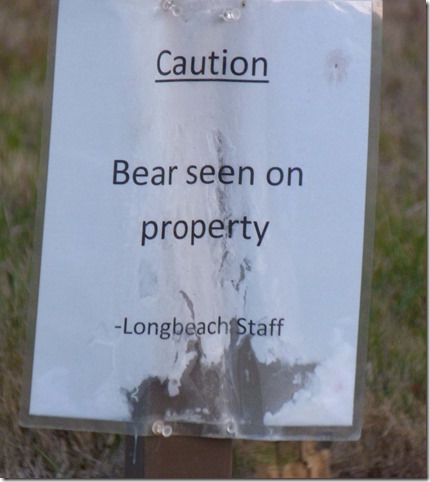 The last time we were here the Verizon internet was terrible, but so far it’s been slow but at least it works. And it’s no worse than what we had at the Escapees campground in Chimacum, even though we had 4G up there. If it stays at this level we’ll be okay.

Today we’ll probably stick close to home. I really need to get back to work on my current novel, Terry has some bookwork to do, and I’m always making some kind of mess she needs to clean up, so I’m sure she’ll keep busy.

4 Responses to “A Long Short Trip”