If anybody came by to knock on our door yesterday morning, we never heard them. We were busy sawing logs after having to be up early every morning to man our vendor booth at Escapade.

When we did finally drag ourselves out of bed, we went outside to wish Jim and Chris Guld from Geeks on Tour happy anniversary and safe travels as they prepared to pull out. A number of vendors who were parked near us had already hit the road and others left during the day.

Even though the Escapade market area was closed, there were still seminars going on but we didn’t feel like doing much of anything, so we didn’t. During the afternoon Charles and Chris Yust stopped in for a visit, and later on we all went up to the main building for the Closing Ceremony and catered dinner to honor the Escapees RV Club’s 35th birthday.

Everybody started lining up to get in the door and choose a table but our group stayed put until the rush was over. I spent enough time in the Army that I don’t stand in line for anything, especially rubber chicken. 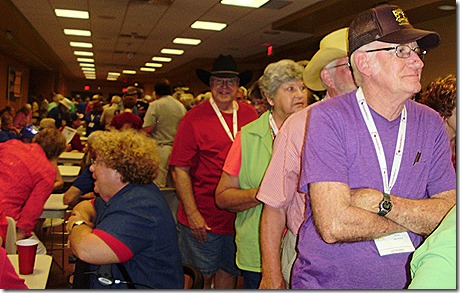 Here is our happy little table group, starting with Miss Terry on the left, then Charles and Chris Yust, Jan White, and Greg. The chicken tasted good, but it was very, very dry. Not the worst rubber chicken I’ve had at a thousand banquets over the years, but the Colonel didn’t have anything to worry about. 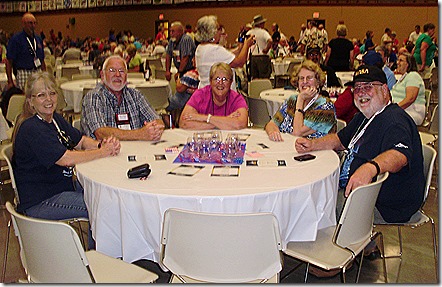 Chris Yust was busy taking pictures with her cell phone, including this one of Greg and Jan (top) and myself and Terry (bottom). Do I look as tired as I felt? 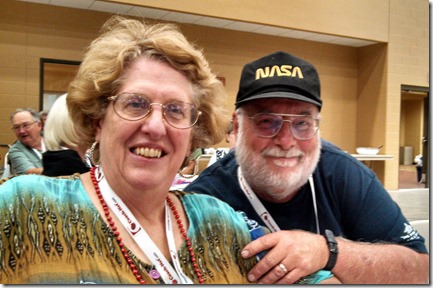 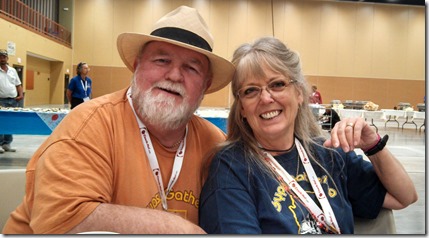 There was a big fireworks show scheduled later in the evening and we were all going to meet up at Charles and Chris’ motorhome to watch it, but the clouds rolled in, we started hearing the rumble of thunder, and then it started to rain.

We scrapped that plan and decided to go out and sit in our Explorer to watch the show. It was actually pretty impressive, with lots and lots of skyrockets lighting up the night and Mother Nature putting on her own light show at the same time. A couple of times streaks of lightning shot right through the exploding fireworks and I’d have loved to have caught it with my camera, but I was too slow.

Just about the time the fireworks display ended, the rain really started to pour down and continued most of the night. They had bad weather here in Gillette during the FMCA rally a couple of weeks ago and a lot of RVs had to be towed out. I hope the folks leaving here today don’t have the same experience.

As for us, we plan to sit tight until the holiday weekend is over. We don’t have any commitments until mid-November and no place we have to be. When we leave here we’ll head toward Washington state, taking our time and arriving wherever we end up whenever we get there. Life is good.

Thought For The Day – Do that which is good for your soul.