We love the Pacific Northwest, and this part of the country is one of the most scenic you’ll find anyplace. We spent yesterday playing tourist around Port Townsend and Miss Terry’s digital camera got a real workout. As she said, there’s a photo op everywhere you look!

We started out with a visit to Fort Worden State Park, which is perched on a point of land jutting out into Admiralty Inlet. Fort Worden was one of three Coast Artillery installations built in the late 1800s to protect the cities along Puget Sound from attack by enemy ships and was an active military base until 1953. It became a state park in 1973. 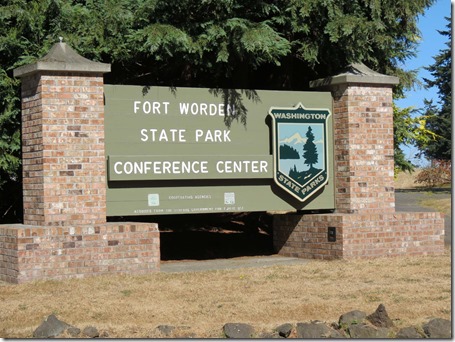 Today visitors can tour the old fort, whose barracks and buildings have been preserved. If you get a sense of déjà vu, it may be because the 1982 movie An Officer and a Gentleman, starring Richard Gere, Debra Winger and Lou Gossett, was filmed here. 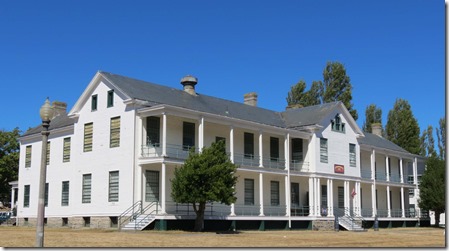 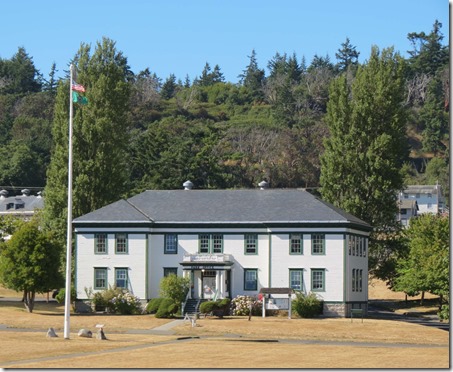 In addition to two museums on the old fort, the park also includes beaches, hiking trails, a kayak rental, and historic Point Wilson Light. Entering service in 1879, the original lighthouse was replaced with the current structure in 1914. The tallest lighthouse on Puget Sound, it was automated in 1976 and is no longer open to the public. 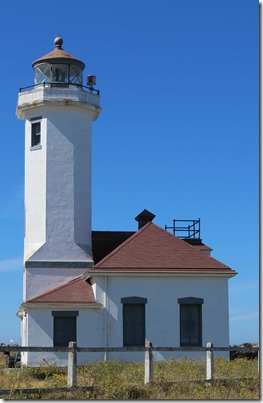 Even though it was a pretty day with lots of sunshine, for a while there was a strange, almost surreal fog bank obscuring the shore of Whidbey Island. 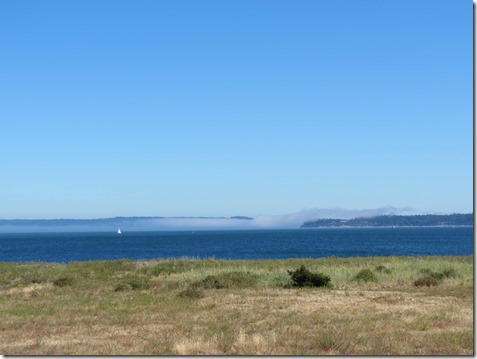 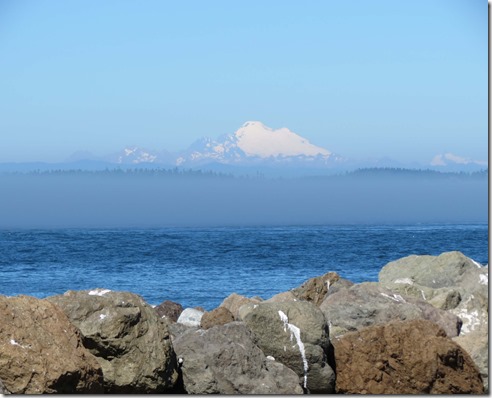 But that didn’t keep boaters off the water. Everywhere we looked there were sailboats and motorboats of all sizes, as well as a couple of ferries, and even folks in kayaks. 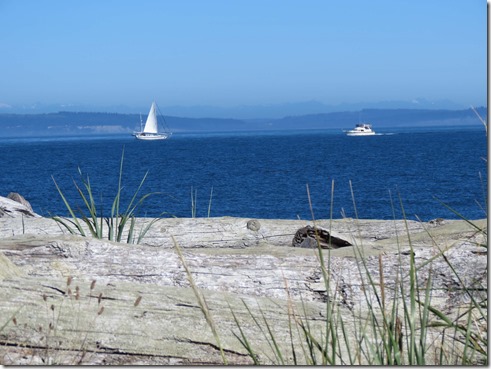 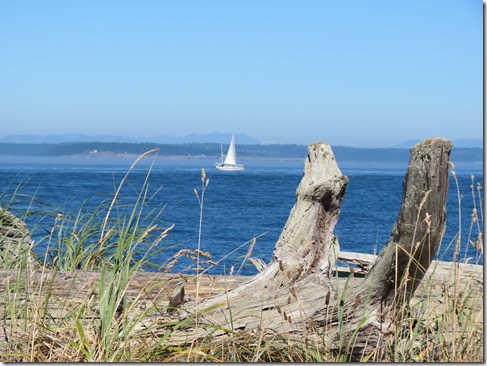 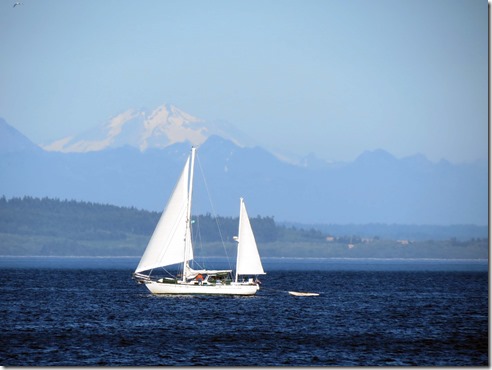 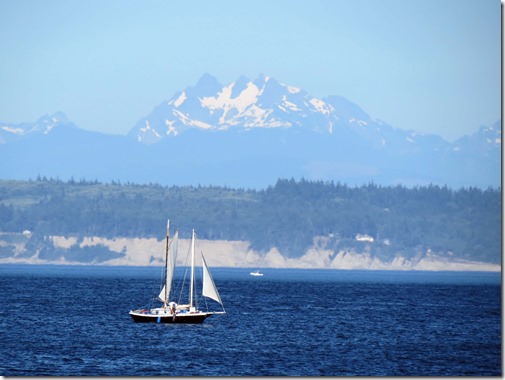 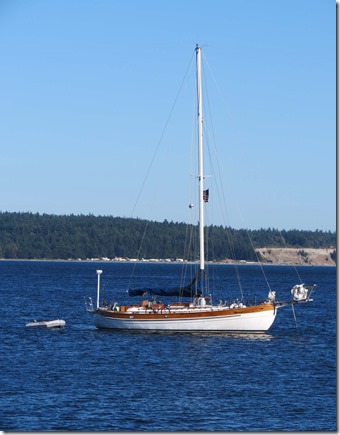 And then there were boats that have seen better days and will never float again. 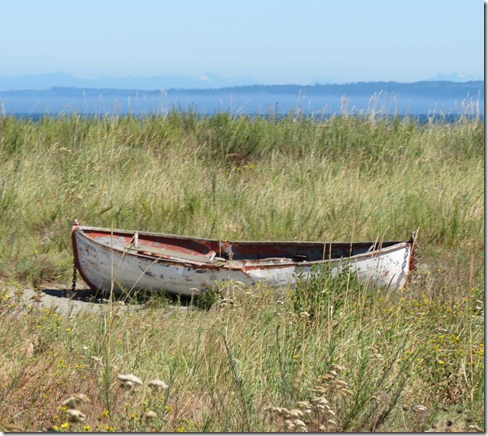 This fellow wasn’t catching anything, but he was still having a good time. How could you not with that view? 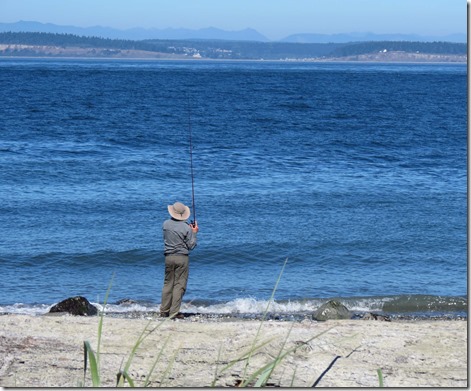 Eventually we left Fort Worden and drove into town where a group called Locust Street Taxi was performing on Water Street. I think the ’60s were very good to this fellow in the red shirt, who never stopped dancing song after song. But he sure was having fun. 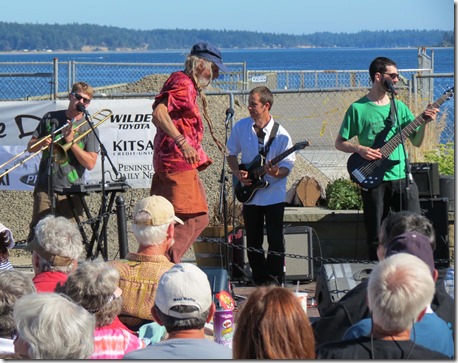 A couple of blocks away we came across this trio of street performers doing their thing. 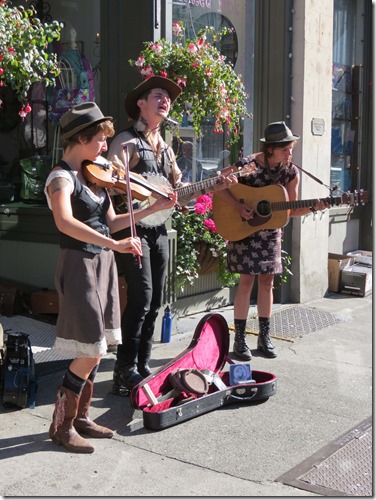 Between the town’s wonderful views across the water, beautiful old Victorian buildings, eclectic shops, live entertainment everywhere you look, festivals and friendly people, you would have to work very hard to have a bad time in Port Townsend. 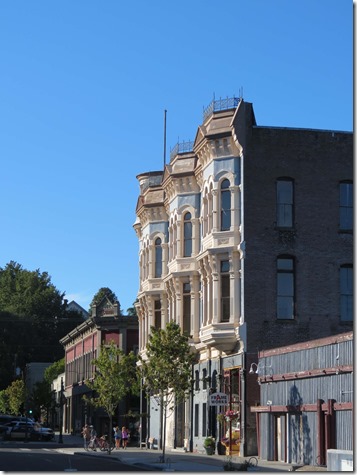 Eventually we decided we couldn’t ignore our growling stomachs any longer and went to Golden Ocean for dinner. This nice little Chinese restaurant came highly recommended, and for good reason. The service was good and the food was delicious.

Back at the campground, I ran into Nick Vacca, who attended several of our western Gypsy Gathering rallies and we visited for a while. Nick has a lot here at Evergreen Coho and one at the Escapees co-op in Casa Grande, Arizona and divides his time between the two when he’s not off exploring somewhere in his RV.

As if playing tourist and doing all that great photography wasn’t enough for one day, in the evening Miss Terry made me a batch of her delicious peanut butter cookies. Is there anything in the world better than fresh hot cookies washed down with a big glass of ice cold milk? If there is, I’ve never found it.

If you’re looking for something new to read, several of my author friends have put together an anthology of short stories called End Of The Road that is currently free on Smashwords. Check it out and download a copy.

Thought For The Day – It is curious that physical courage should be so common in the world and moral courage so rare. – Mark Twain