Nick's Blog » On To Billings

After a quick run to the post office in Gillette yesterday we returned to the Cam-Plex, hooked our Ford Explorer to our Blue Ox tow bar and made ready to get out of Dodge… err Gillette.

But first we had to have the requisite goodbye hugs from Greg and Jan, who were also hitting the road, but in the opposite direction. One of the sad parts of the fulltime RV lifestyle is saying goodbye to the people you love, but one of the great things about it is that we know we’ll see them again somewhere down the road.

Since it had rained so hard the night before, we were a little concerned about getting out of our RV site, which was on grass, but I put the Winnebago in gear and just lightly touched the accelerator and she did just fine.

It was a good day for driving, no wind or rain and traffic wasn’t bad at all. Of course, we did have several construction zones where the highway funneled down into one lane, but we rolled right along with no problems or major delays. 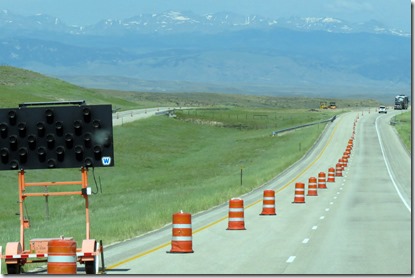 The first views of the rugged snowcapped Bighorn Mountains were breathtaking. We really do live in a beautiful country, don’t we? 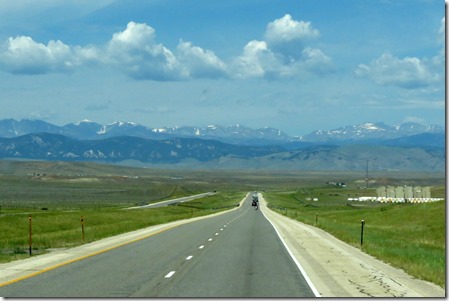 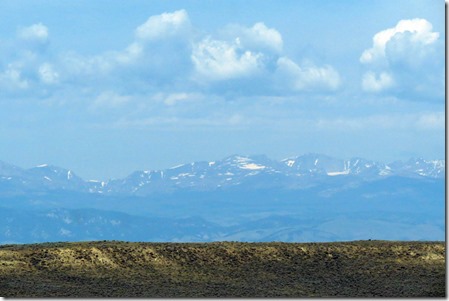 We had been traveling west, but at Buffalo, Wyoming Interstate 90 turns north for the run into Montana. 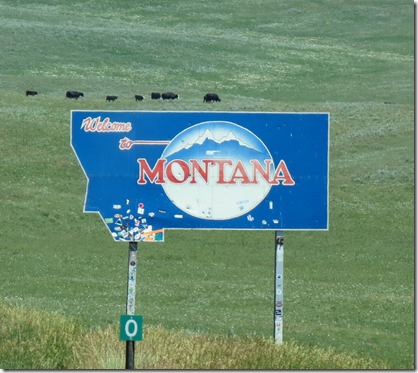 Miss Terry was busy taking pictures, and I really liked this pastoral scene she captured. 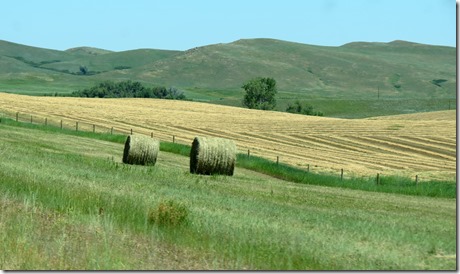 The highway began to climb as we passed through the Crow Indian Reservation, and there were enough twists and turns to keep us from getting bored. 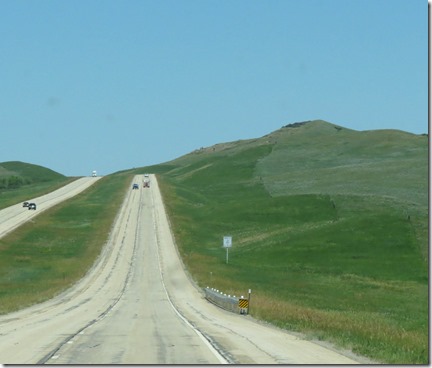 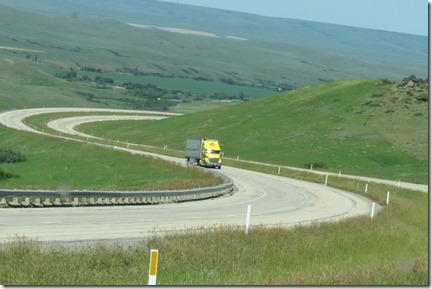 We passed the turnoff to the Little Bighorn Battlefield, where the Plains Indians wiped out Custer and the 7th Cavalry in a last failed bid to preserve their way of life. We’ve toured the old battleground on previous trips so we didn’t stop. Besides, we had people waiting for us in Billings.

Arriving at the Billings Moose lodge about 2 p.m. with 220 miles behind us for the day, we managed to get their last available site with 30 amp power, and with the temperature in the mid-90s we were glad to get our basement air conditioner working.

One we were parked and hooked up, we drove across town to Interstate Power, where Chris Dunphy and Cherie Ve Ard from Technomadia are parked while getting the old Detroit Diesel rebuilt in their GMC bus conversion. I’ve exchanged e-mails with Chris and Cherie for several years now, but this was out first time to meet in person. They are a delightful couple with a world of knowledge about computer technology and a laid back way of looking at life that we really enjoyed. 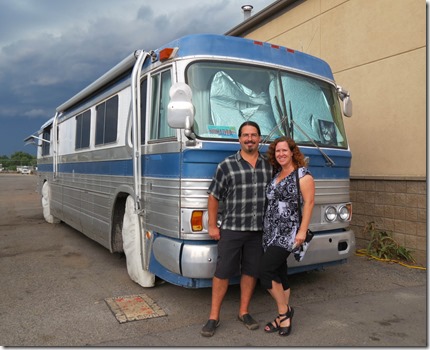 We had only planned on a quick visit, but I’m afraid we talked their ears off, and before long it was time to eat, so the four of us went down the road to Fuddruckers and talked some more while we ate dinner. And Cherie taught me a new phrase for the fulltime lifestyle that I am going to adopt. Wherever we are in the country, we’re always in the NST time zone, Nomadic Standard Time. Who needs a schedule? I like that! Thanks for making time for us Chris and Cherie, we really appreciate it and we look forward to seeing you again in our travels.

A couple of people had told us that Billings is very RV unfriendly and that they will not allow you to park overnight at places like WalMart. I knew that the city had that reputation in the past, but thought they had moved past it. And apparently they have, because we saw RVs parked in several shopping center parking lots, and at Cabela’s, which has a dedicated RV parking area. We drove through to check it out, and yes there are signs that say No Overnight Parking, but there were plenty of RVs there. One fellow we talked to said they had checked with the store personnel and were told it was no problem. We ran into the same thing at a Cabela’s in Pennsylvania last year, the signs are there but they have no problem with it and we parked for the night with no hassles.

And who should we happen to run in the parking lot but our old friends Phil and Ann Botnick! We had a nice little visit and Phil confirmed that they have been stopping there for the last two or three years with no problems.

It’s about 350 miles to Missoula, and we’d like to make that today. Another couple of old friends, Smokey and Pam Ridgley, are workamping there and we have not seen them in a long time. We’re hoping to connect and visit for a while.

Thought For The Day – Life is a great big canvas, and you should throw all the paint on it you can. – Danny Kaye

5 Responses to “On To Billings”