Pioneer explorer Daniel Boone is quoted as saying about his journeys through the uncharted Kentucky frontier, “I have never been lost, but I will admit to being confused for several weeks." Boone has been one of my heroes since I was a kid, and yesterday I felt like I was following in his footsteps even though I was on the other side of the country.

We left Billings a little before 9 a.m. yesterday morning and headed west on Interstate 90 through some of the most picturesque country you’ll find anywhere. And Terry was busy with her camera all the way. The hardest part of writing some blogs for me is deciding which of her pictures to use, because there are so many to choose from. 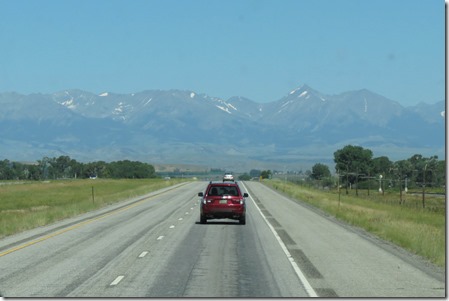 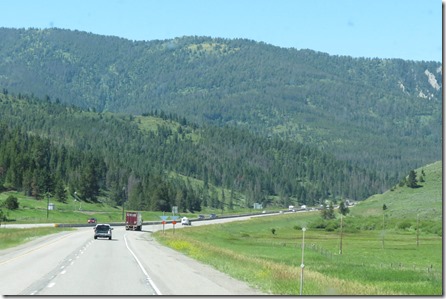 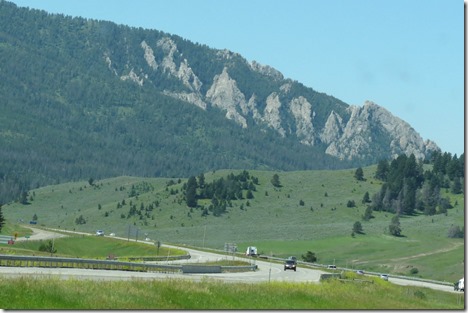 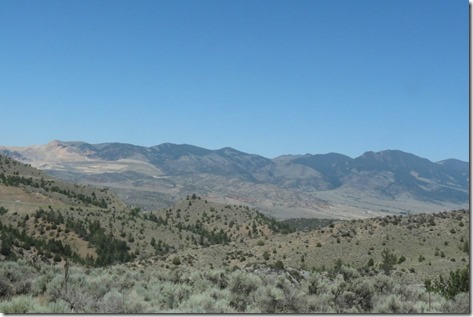 There is no flat land west of Billings, Montana. It’s all either uphill or downhill. As we climbed some of those grades I told Terry there are times when I don’t miss our old slow moving MCI bus conversion at all. I was cruising along at 50 or 55 miles per hour over passes we crawled up at 10 or 15 in the bus. 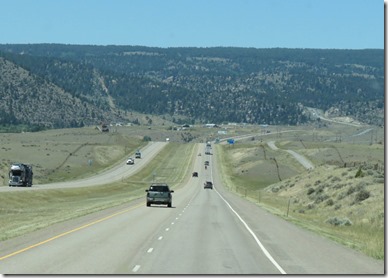 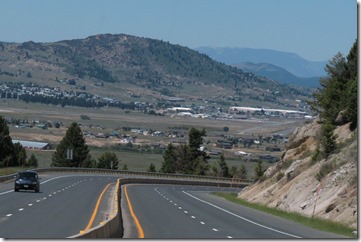 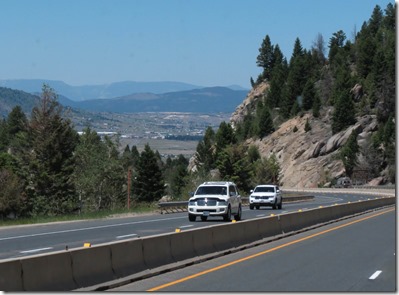 We saw some amazing rock formations along the way. 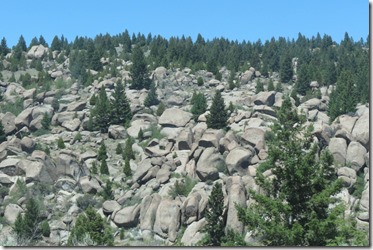 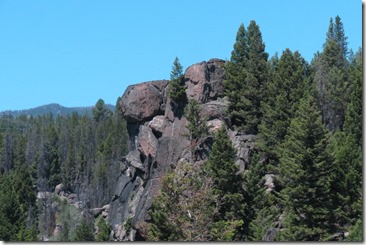 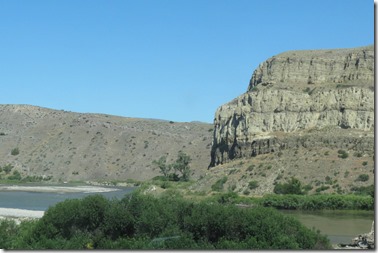 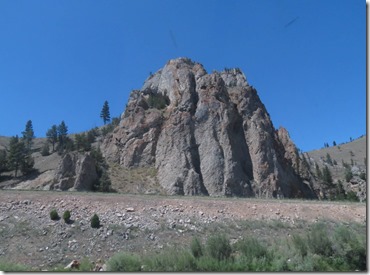 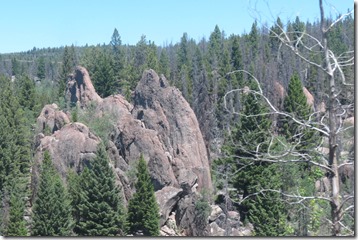 This deep blue river paralleled the highway for miles. 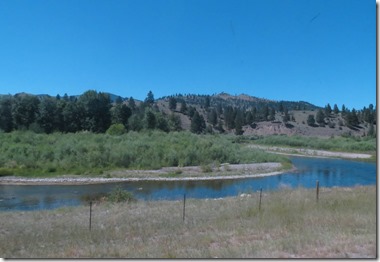 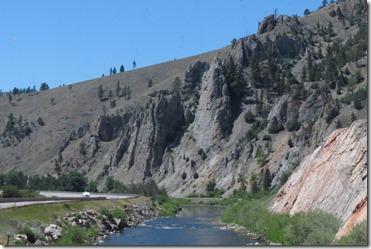 Doesn’t this look like an advertisement for an RV sales company? 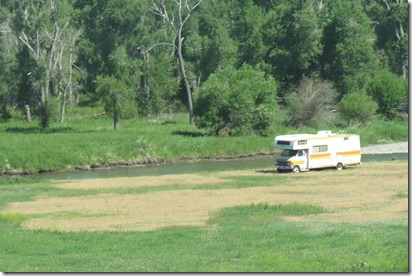 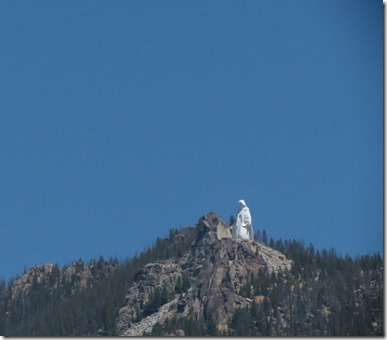 We had planned to stop for the night at the WalMart in Missoula so we could meet up with our friends Smokey and Pam Ridgeley. That was about 340 miles, a long day but what the heck, we can do it.

Or not. It’s about six miles from the Interstate to the WalMart on the west side of town, following U.S. Highway 93. It was all stop and go town driving with a lot of traffic to keep us on our toes. Things got real interesting when some numbskull driving a big Class A motorhome towing a long cargo trailer pulled out of a parking lot directly in our path. Maybe his rig will stop on a dime, but mine damn sure can’t!

We expect that from people in cars, but you’d think somebody driving a big RV would know better. But you’d be wrong. We call these kind of jerks OPOPs, which stands for Only People On the Planet, because they seem blissfully unaware that there are other people besides themselves in the world.

When we got to the WalMart it was packed, with no room at all to park. We saw another OPOP there, a fellow in a motorhome setting up his tripod TV dish in the parking lot. We are our own worst enemy.

We decided to go down the road a bit and see if we could find a safe place to park long enough to hook up with Pam and Smokey, but somehow I missed the turnoff to U.S. Highway 12 west and drove about 30 miles out of the way straight south On U.S. 93 before Terry said, “This doesn’t look familiar at all. I think we’re on the wrong road.” We’ve been over this route several times, and I have no idea how I screwed up like that. But at least I wasn’t lost, just confused.

We backtracked to Lolo, where there was a Pilot truck stop right at the intersection with U.S. 12 that I had missed. We stopped to top off our tank, and when Terry went inside to pay, she asked if we could park in the back of their large lot overnight. We’ve spent many nights at Pilot and Flying J truck stops over the years and always try to buy our fuel there because they are RV friendly. But not in Lolo! Not only did the clerk tell her that they do not allow overnight parking, he also refused to give her the three cent a gallon discount we are supposed to get with our Pilot Loyalty card. I’ll go a long way out of my way to avoid that place in the future.

By then it was 5 p.m. and we were tired and frustrated and said the heck with it, we’ll catch Smokey and Pam some other time and headed down U.S. 12 toward Lolo Pass, planning to stop at the rest area at the Idaho state line. Wrong again. We found ourselves caught up in a long, dusty, slow moving construction zone that went on and on seemingly forever. 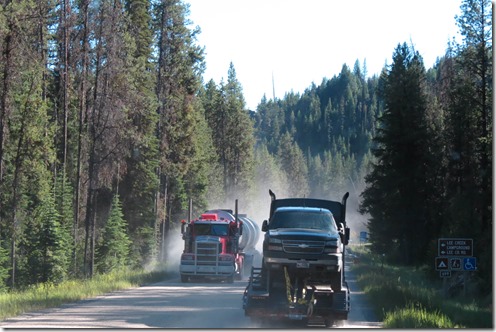 When we finally reached the rest area/welcome center it was inaccessible and we could not have made it across the traffic to get there if it would have been. So we drove and drove and drove some more, finally ending up at Lewis/Clark Resort in Kamiah, Idaho.

I must be getting old, because 530 miles behind the wheel of a motorhome, over 100 of it on a narrow two lane mountain road is a long day. Yeah, I know, that’s too much in one day. We sure didn’t plan it that way, but sometimes plans change, or make themselves up as we go along. I’m tired and headed for bed.

Thought For The Day – Regular naps prevent old age, especially if you take them while driving.

16 Responses to “Not Lost, Just Confused”