For us, no trip to the Pacific Northwest is complete without a day trip across Puget Sound on the ferry that runs between Bremerton and Seattle. And yesterday was the chosen day.

We got to the Bremerton waterfront a half hour before the ferry was due to depart on one of its fifteen daily round trip crossings and spent the time enjoying the scenery and admiring the boats in the marina. 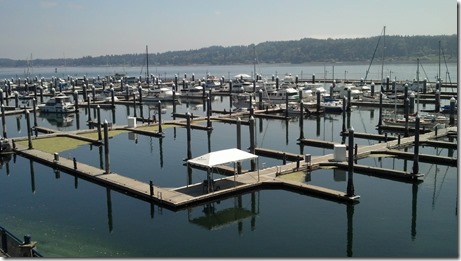 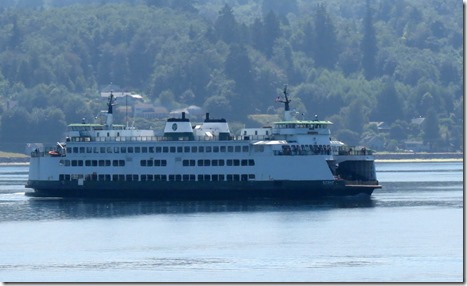 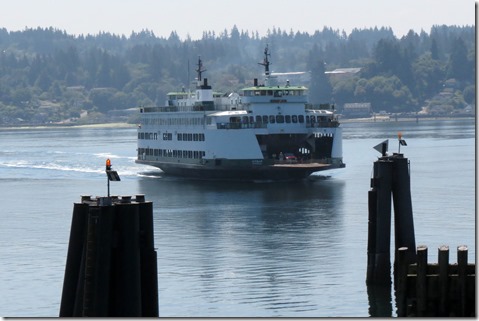 I’ve ridden these ferries many times and I’m always impressed with how quickly they can load and discharge passengers and autos. Crewmembers stand on the auto deck directing traffic, and yes, most ferries can even carry large Class A motorhomes and even eighteen wheelers. 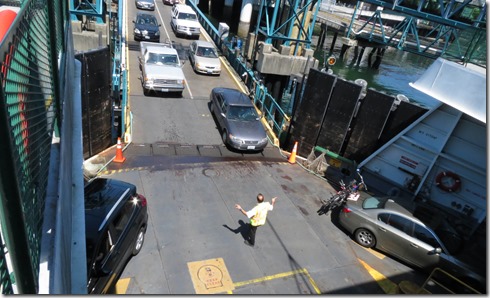 Within 20 minutes of arriving they retracted the loading ramp and we were pulling away from the ferry terminal. 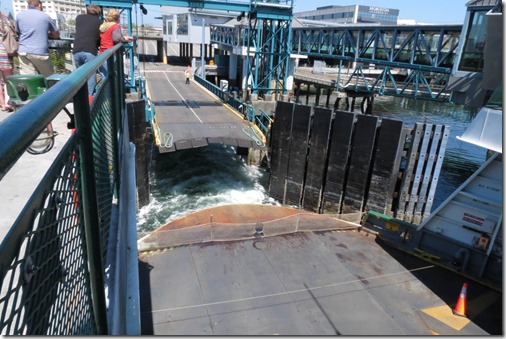 There were a lot of boats out on the water, everything from sailboats and cabin cruisers to kayaks. 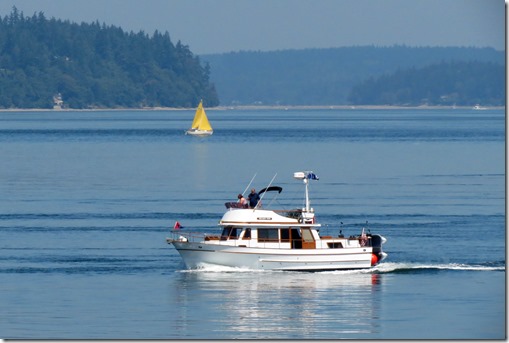 The crossing takes about an hour and it’s always thrilling to see the Seattle skyline and the Space Needle as we approach the city. 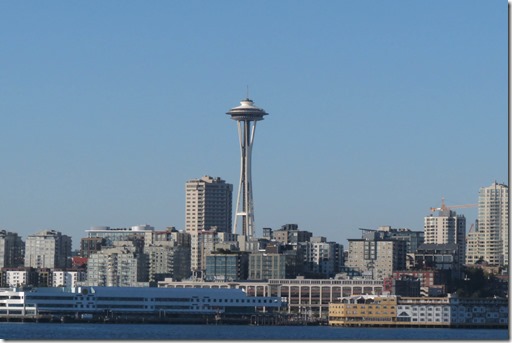 New since our last visit a couple of years ago is the Seattle Great Wheel on the waterfront. The 175 foot tall attraction is the brainchild of Seattle businessman Hal Griffith, who spent 30 years dreaming of having a Ferris wheel in the city, so he built one on his own pier. Opened to the public in 2012, the wheel has 42 fully-enclosed gondolas, each capable of holding eight people. There is also a VIP gondola, with four bucket seats and a glass floor! The wheel is fully handicapped accessible, with a lift and ramp that brings wheelchairs directly into the gondolas. 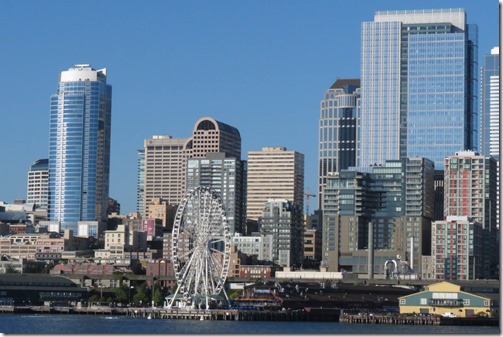 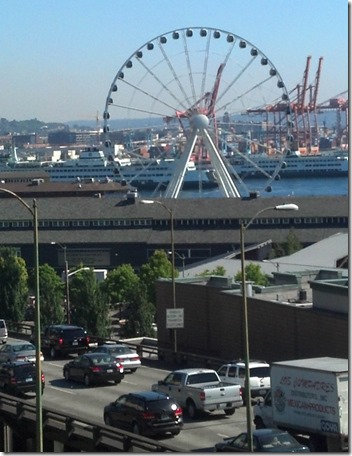 We’ve done the Seattle Aquarium and most of the waterfront attractions in the past, but every trip must include a visit to historic Pike Place Market. Here you can find vendors selling everything from fresh seafood, fresh produce, to flowers, artwork, jewelry, and clothing. If you can fight your way to the front of the crowd, it’s always a treat watching the vendors throw huge salmon across their booths. 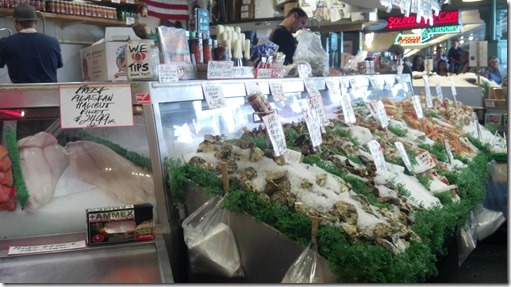 We have a love/hate relationship with the Market. We always look forward to going there, and then we quickly remember that the crowds are insane. If you’ve ever been to the Big Tent in Quartzsite, you have some idea of what I’m talking about. Basically, you move when the crowd moves and you stop when it stops. If you’re freaky about your personal space, you’re not going to like the Market, because by the time you get out of there you’ll have been bumped, prodded and groped more than the new guy on the cellblock.

After we get our fill of the Market, we like to explore the little shops in the surrounding area, where you can find all kinds of goodies, like ethnic foods, kitchen utensils, wines, herbs and spices, cheese, and fudge. 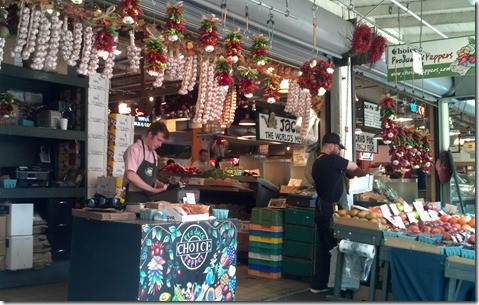 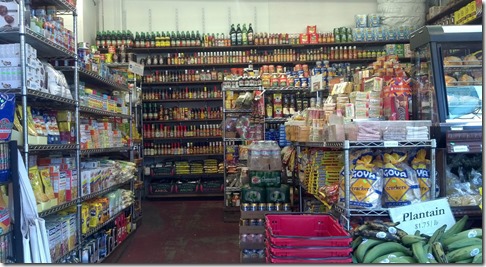 I always like seeing the street performers. In one block we saw a group of men singing a capella, a young man playing banjo accompanied by a pretty girl on a violin, and this fellow playing long wooden Alpine style horns. I believe they are called trombobüchel. 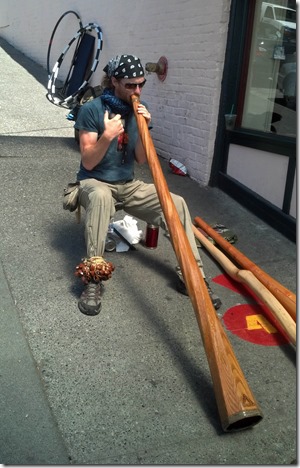 Another tradition is to have fish and chips at Ivar’s Fish Bar at Pier 54, near the ferry terminal. Ivar’s has been a landmark on Seattle’s waterfront since 1938, and over the years they have expanded to 25 seafood bars and three full service restaurants as far away as Spokane. While we ate our dinner we enjoyed people watching and also the seagulls who occasionally swept down to steal lunch from a careless diner.

It was hazy part of the trip back, but Mount Rainier was still an awesome sight. 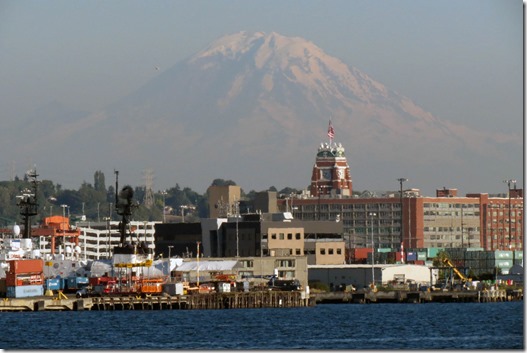 It was after 9 p.m. by the time we got back to our motorhome at the Bremerton Elks lodge and we were tired and footsore. But it was worth it, because we had added a whole bunch of new experiences to our memory banks.