Nick's Blog » Settled In At Escapade

We left the fairgrounds in Douglas about 9:30 yesterday morning and began the 120 mile run north to Gillette on State Route 59. It was a nice day for traveling, and since we had until 2 p.m. to arrive and get parked, we were not in any big hurry.

Which was just as well, because though the two lane road was okay, there was a lot of traffic, much of it big trucks, along with plenty of pickups and a few RVs too. 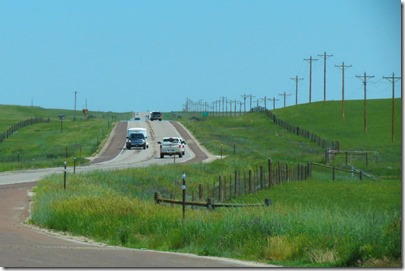 About 20 miles outside of Douglas we got behind two wide load semis carrying huge earthmoving machines and their pilot trucks. On the flats they were running away from us, doing at least 75 miles per hour, but on the many hills they slowed down to as little as 20 mph. There was too much traffic to safely pass on the two lane road, so we just hung back and let them do their thing, being grateful it was early in the day and we had lots of time.

Part of the route passed through the Thunder Basin National Grassland, with flat-topped hills off in the distance. 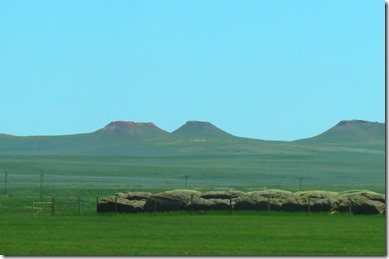 There were antelope everywhere we looked; sometimes a lone animal or two, other times small herds of a half dozen or more animals. 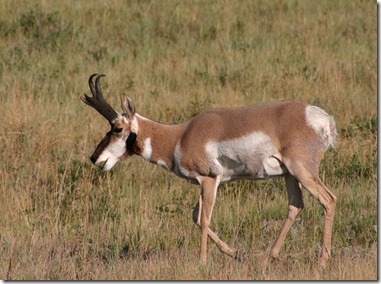 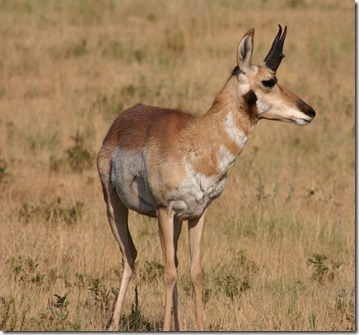 For much of the route, railroad tracks paralleled the highway and long coal trains headed south, while empty trains waited for their time to go north to pick up a their loads. This region supplies about 40% of the coal in the country.

A pyramid in Wyoming? Who knew? 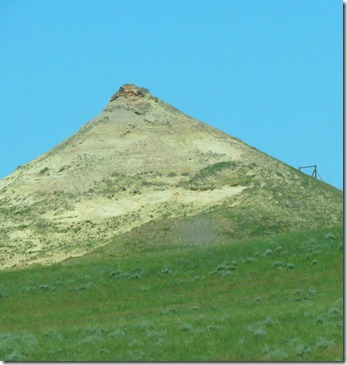 When we got to Gillette we stopped at the Flying J to top off our tank, since Wyoming is increasing its fuel tax by ten cents a gallon July 1st. We actually had enough to get to Billings, Montana when we leave here, but I prefer to have a full tank whenever I can.

We got to the Cam-Plex about 1 p.m., unhooked the Explorer from our tow bar, and were sent to our parking area. It was nice to see so many familiar friendly faces. Longtime reader and friend Mike McFall helped us get backed into our full hookup 50 amp site, right next to Jim and Chris Guld from Geeks on Tour. Rich and Mary Coppens stopped to say hello, and there were others on hand to greet us, but you all know how poor my short term memory is, so I can’t tell you their names.

Once we were settled in, we hopped in the Explorer and drove around the huge Cam-Plex, stopping to say hello to Linda Faye, and later on, Dave and Linda Neil.

We stopped to visit with our pals Charles and Chris Yust for a while, and then we decided it was time for dinner. Dining out is a popular pastime with fulltime RVers, and after all these years we’ve got it down to a science. Jim and Chris Guld joined us and we had a good time visiting, even though the restaurant was so loud that conversation was difficult. While we were at the restaurant another longtime friend, “Cool” Judy Rinehimer, stopped by our table to say hello and share hugs all around.

Okay, here’s a riddle for you. What’s better than having somebody rear end you at a stoplight and not have any damage done and no injuries? The answer is, having them do it in front of a cop! We rode to dinner with Charles and Chris, and coming home, Charles stopped for a red light when two young women in the car behind us didn’t stop soon enough. It was only a bump, and fortunately no damage was done to either car and nobody was hurt. And when it happened, Charles was stopped right next to a police car! After having us pull into a nearby parking lot, the officer determined that everybody was okay, and then sent us on our way. But not before we heard the driver of the other car blame her passenger for the accident. I’m not sure how that worked out for her, but the cop didn’t seem too impressed.

Today we’ll check in at registration and get our vendor booth set up, and starting tomorrow, we’ll be greeting friends old and new and hopefully, selling lots of subscriptions, books, and more.

Thought For The Day – Laziness is nothing more than the habit of resting before you get tired.

3 Responses to “Settled In At Escapade”