Nick's Blog » If One Is A Genius, Are Two A Genie?

After being cooped up inside for most of the past week working on the new issue of the Gypsy Journal, we both had cabin fever and definitely needed a day out yesterday.

I had an appointment to take my iMac to the Apple store, but since I knew they were going to want to keep it for a while, I didn’t want to do that until I talked to our printer back in Michigan to be sure they had received the files I uploaded late Thursday night, just in case there was a problem and I needed to re-send them.

After getting confirmation that they had the file, we left and drove to the Apple store, where the first “genius” I talked to at the Genius Bar (don’t blame me, I didn’t name them that!) ran a quick diagnostics test and told me that the aftermarket RAM in the computer was the source of all of my problems. I told him I knew that wasn’t it, since it the problems began before the memory was upgraded, and the memory had been removed to test that theory on one of its trips back for repairs and I had the same problems. He didn’t want to hear that because, after all, he’s a genius, right?

Then we were switched to a very sharp young lady genius who said the memory had nothing to do with the problem (don’t tell me, tell the genius next to you). After reading our service history and what all has been done, she said she suspected one of two things; either the cable that connects the CD/DVD drive is bad, since they never replaced it and we’re now on the third or fourth drive with the same failure, or when they uninstalled the Parallels program that Apple sold me to run Windows programs on the iMac, and then said was always a problem, they had not done it correctly and parts of Parallels was still in the computer causing trouble. So she suggested they totally erase the hard drive and start over.

Knowing something like that might happen, I had done a total backup to my Seagate external hard drive

Thursday night. By the way, speaking from sad experience, if you don’t have your computer backed up, it’s not a question of if you will have a computer crash and lose all of your data, it only a matter of when. Do yourself a favor and buy an external drive. Someday you will thank me for this advice.

She said they may also just replace the hard drive, cable, and CD/DVD and be done with it, since the computer’s other problems have continued also. Hopefully they’ll resolve the iMac’s issues this time around, but I’m not optimistic.

When we were done at the Apple store, we spent some time touring the National Museum of Nuclear Science and History. The museum tells the story of the development of nuclear power and its uses in both war and peace. 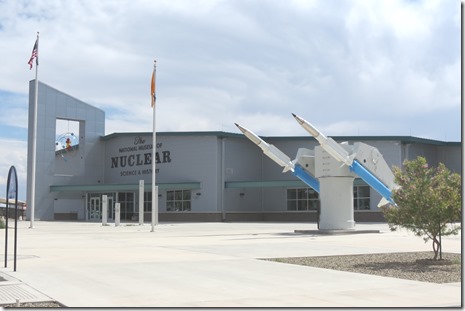 They had an impressive display of rockets, missiles, and airplanes, including this B-29 Superfortress (top) and the B-52 Stratofortress (bottom). Terry’s dad worked on B-52s in his Air Force career and knows these huge bombers inside and out. We’ll have a feature story on the museum in a future issue of the Gypsy Journal. 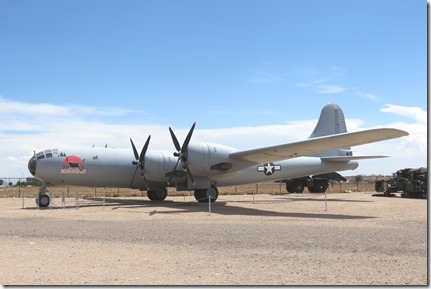 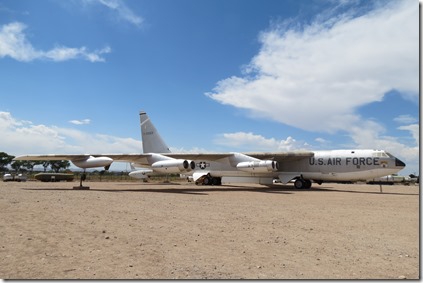 After stopping at the post office to send out some orders, we then hit some of the RV parks around town, dropping off sample bundles of the paper, and made a stop at Camping World to pick up a couple of light bulbs for our bathroom vanity.

By then it was late in the day so we had dinner at Golden Corral, stopped at the grocery store to pick up a few items, and came home. It was nice to get out for the day, and we will probably do it again today or tomorrow.

And finally, proving that there is an idiot born every minute, last night Rock Center interviewed a guy who charges $35 for hand sharpened pencils. It’s a ten cent pencil, but you get a certificate saying an artisan has hand sharpened it, and the shavings from the sharpening. And he’s sold 1,500 so far! So how does somebody dumb enough to buy a $35 pencil make enough money to afford a $35 pencil? And where are these people, anyway? I need to find them. I have a lot of hand crumpled tissue from my last case of the sniffles that should be worth a fortune!

Thought For The Day – I may be schizophrenic, but at least I have each other.