Nick's Blog » I Googled It!

I’m not a smart guy, but that’s okay, because I know a lot of smart guys I can call when I have a problem, and that’s even better! It saves room in my brain for important stuff like where the best pizza and Chinese buffet are in town.

Of course, when you bother people with phone calls two or three times a month, or more (I have a lot of problems!), it’s only fair that occasionally they try to point you in the direction of finding information elsewhere, to give themselves a break. But there’s no way I’m falling for that! I’ve got a good thing going and I’m not going to screw it up.

My buddy Greg White is always there for me, but when I ask a question, he just can’t resist asking if I tried searching for the answer on Google. Apparently Greg believes you can find out anything on Google. And it turns out he’s right!

Sometimes I think whoever designed our iMac computers never actually used a computer, because they did at least two very dumb things. One was to put all of the USB ports on the back of the unit, so that anytime you need to plug in a flash drive or other USB device you have to fumble around blindly trying to get it plugged into the port, or else turn the computer around to see what you are doing.

The other dumb thing they did was to put the slot for the CD/DVD drive and the slot for an SD card on the side, located very closely together. We learned this could be a problem the other night when Terry accidently slipped her camera’s SD card into the CD/DVD slot and it disappeared inside. Oops! 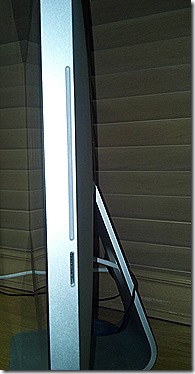 We unplugged the computer and turned it sideways, hoping the card would fall out. No such luck. I called Greg and he suggested putting some Gorilla tape on the end of something we could slip inside the slot, hoping to catch the card. But the slot has some sort of dust brush inside and the tape started gumming up the brush. We had about decided we needed to make a trip to the nearest Apple store when I decided what the heck, and Googled “SD card stuck inside iMac CD/DVD drive.”

As it turns out, this apparently happens a lot, because a lot of people had made the same inquiry. And the solution was quick and easy. Several websites said to take a piece of stiff paper, such as a manila file folder, cut it into an L shape, tip the computer sideways and use it to fish the card out. Terry had a slim piece of plastic that she cut into the suggested L shape, and it took just seconds to get the card back out! Thank you Google!

We had visitors yesterday. Our good friends Barry and Jan Kessler, who are spending the summer in this area, came by the Elks lodge campground and we spent a couple of hours visiting. It’s always nice to see them and get up to date on their activities and adventures.

, is climbing the charts at Amazon and by last night it was #46 in the Kindle Store in Humor & Entertainment > Humor > Essays and #51 in Politics & Government > Specific Topics > Commentary & Opinion. I appreciate everybody’s support. It should be available on Barnes & Noble sometime today for Nook readers.

I’ve also uploaded our popular Guide To Free Campgrounds & Overnight Parking Spots to the Kindle bookstore. That makes 15 titles on Amazon now, and more to come!

Thought For The Day – Don’t tell your problems to people: 80% don’t care; and the other 20% are glad you have them. – Lou Holtz

2 Responses to “I Googled It!”