There are some things that we’ve all heard about that we know really don’t exist. Santa Claus, the Easter Bunny, Sasquatch, men who pick up after themselves, wives who don’t say “I told you so.” But perhaps the most elusive of these folktales is the tail wind.

As RVers, we know they just don’t exist. If I pass you headed north as you are headed south, it’s a pretty good bet that we’re both fighting a headwind. Don’t ask me how that happens, I’m a humble scribe, not a physicist.

But yesterday we actually did experience a tailwind. I don’t blame you if you don’t believe me; I wouldn’t believe you if you told me that either. But we did.

We pulled out of the Show Low Elks lodge campground about 9:30 yesterday morning, but before we made it to the street our TireTraker tire pressure monitoring system went off, informing me that the left front tire on the Winnebago was down about 30 pounds. We stopped at the lodge, plugged our Craftsman air compressor into an outlet on the side of the building and topped the tire off. That’s the same tire that was down when we left Apache Junction a month ago. I’m not sure if the tire has a slow leak or if the sensor cap is leaking. I’ll have to monitor it and see what I can figure out.

With the tire taken care of, we left Show Low on U.S. Highway 60, a good two lane road that took us 200 rolling miles east to Socorro, New Mexico. 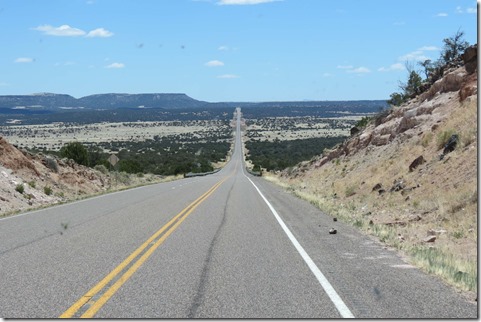 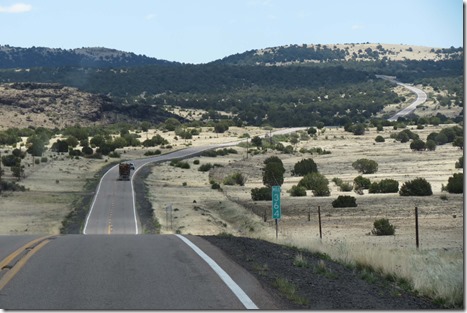 There’s a whole lot of nothing out there! 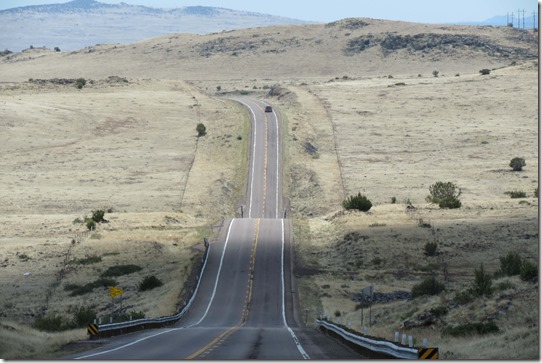 We had a stiff tailwind pushing us all the way, which really helped our fuel mileage. At the end of the day, my Silverleaf engine monitor showed we had gotten an amazing 10.92 miles per gallon! I couldn’t believe that and crunched the numbers three times, dividing miles drive by gallons of diesel used, and that’s what I came up with each time. 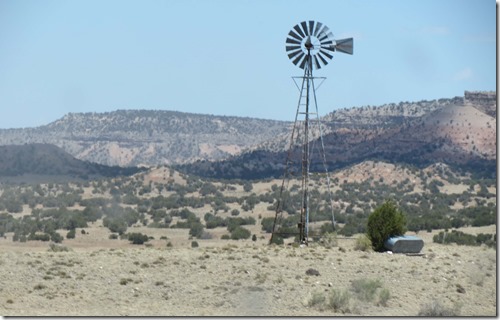 Along the way, Terry spotted a small herd of antelope. We usually see a lot of wildlife on this road, everything from hawks and eagles to pronghorn, but not this trip. Maybe the wind was keeping them hunkered down somewhere.

We stopped in Pie Town to sample their famous pie, but that’s a myth, too. Last year we arrived just as the Pie-O-Neer Café sold the last two pieces of pie, and yesterday there was a sign on the door saying they are only open Thursday – Friday. I think it was signed by the Easter Bunny.

A few miles further we came to the Very Large Array (VLA), a series of 27 dish-shaped antenna on the Plains of San Agustin, fifty miles west of Socorro, that make up the most powerful radio telescope in the world. We stopped and toured the facility years ago, and it’s well worth your time if you pass through the area. 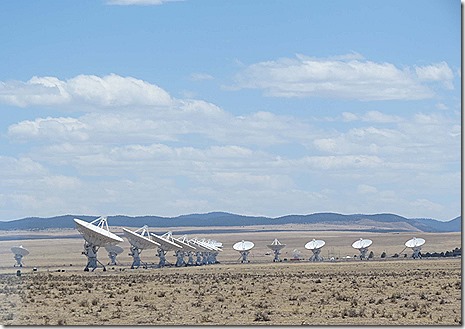 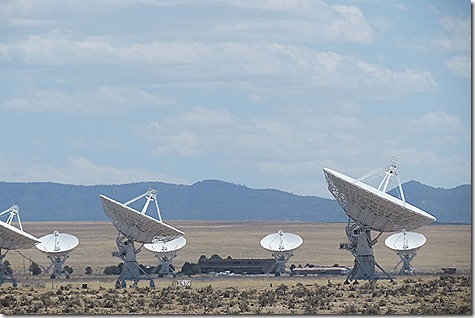 As much as I was enjoying the tailwind, I knew that when we reached Interstate 25 at Socorro and turned north, it was going to become a side wind and be no fun at all. Sure enough, it beat us up for the next seventy miles or so until we got to Albuquerque and turned east on Interstate 40 for the final short run to Hidden Valley RV Mountain Resort in Tijeras.

We registered and a nice man led us to a site, which we quickly decided wasn’t going to work for us. It was just too tight for our 40-foot double-slide motorhome. But there was another nearby site that would work just fine, and Tammy, the friendly lady in the office said we could have it, instead.

The wind was really blowing hard by the time we got the motorhome leveled out and hooked up to utilities and we were more than glad to be off the road, with 295 miles under our belt.

Once we caught our breaths and had dinner, I wrote a new post for my self-publishing blog titled “You’re Dumb!” Check it out and leave a comment.

On another topic, it looks like the dweebs who make the laws in Nevada have decided that they don’t like RV snowbirds, since they have proposed a new law that requires any visitor age ten or older, who stays 31 days or longer, to obtain a state-issued seasonal ID card, at a cost of $17. Visitors will also be required to obtain a special sticker for all of their vehicles, at additional cost. This is from the same folks who tried to ban dry camping a few years back, a move that hurt business for the casinos in Laughlin and still stings today. Check it out at this link.

Thought For The Day – It’s easier to fool people than to convince them that they have been fooled.

7 Responses to “The Elusive Tailwind”