We’ve been in the Apache Junction area for six weeks, which is at least two weeks longer than I like sitting still, and we both have a bad case of hitch itch. But today we get to roll our motorhome’s wheels!

We plan to leave Countryside RV Resort mid-morning and drive to Tucson, where we have two weeks reservations made at Voyager RV Resort. While we would prefer to be heading someplace cooler, we both have medical appointments scheduled and we’re looking forward to spending time with my cousin Beverly. She is one of my favorite people in the world.

Since we are parting company today, for a while at least, I took advantage of our last day together to take advantage of Greg White’s mechanical abilities and good nature one last time. He came over yesterday morning and cleaned all of the Winnebago’s battery terminals and coated them with a special spray that helps prevent corrosion.

Doesn’t the look on Greg’s face just say, “Man, I’m sure glad I’m leaving this guy behind!” to you? Actually, Greg swears he enjoys all of this stuff, and as long as he thinks that, I’m not about to disabuse him of the notion. 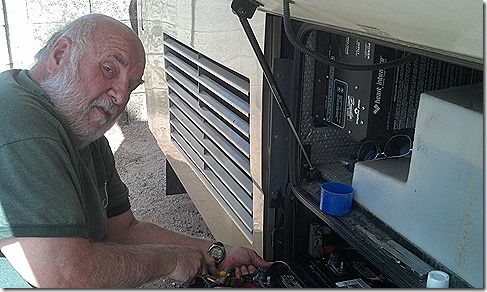 The other day Greg also installed an LED digital volt meter so we can monitor our house battery bank, since we have found that the monitor built into the motorhome’s control panel isn’t very accurate. Greg mounted the meter just above my desk and wired it into the hot side of a light fixture so it’s always visible. While the readout on mine is green, they also come in red from Amazon. 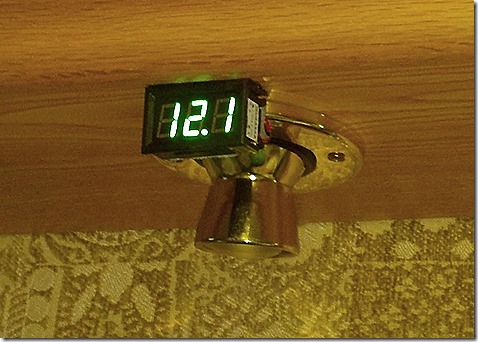 If everything works out, we’ll be in Tucson for a couple of weeks and then go up to our old hometown of Show Low for a visit with my daughter Tiffany and her family and friends from back before we became fulltime RVers. It will be a lot cooler up there, which we are looking forward to.

As much as we would like to be vendors at the Escapees Club Escapade Rally in Gillette, Wyoming the end of June, it doesn’t look like it will work out financially for us. It’s a long way to Gillette, and between the fuel and the rally fees, we’d have to sell an awful lot of subscriptions just to break even.

Since that isn’t going to happen, I made two three-week reservations at Thousand Trails campgrounds on the Washington coast starting in early July. First we’ll be at the Long Beach preserve in Ilwaco July 2 – 23, and then we’ll move north a bit to the Oceana Resort near Ocean City July 23 – August 13.

The good thing about our membership is that it doesn’t cost anything to make a reservation, and we can cancel as late as 24 hours before arrival with no penalty if we have to change our plans at the last minute.

After that we’ll drive up the Olympic Peninsula to Port Townsend to stay at the Escapees Evergreen Co-op for a while. Port Townsend is a charming little town and one of our favorite places in the country. From there we plan to spend a few days in Bremerton, where we can take the ferry across Puget Sound for day trips to Seattle. Eventually we’ll start south sometime in the fall, taking U.S. 101 along the Oregon coast. Oh yes, those wheels are going to roll!

That’s the game plan, but as with all fulltime RVers, our schedule is written in Jello and can change at any moment. Sometimes I’m not really sure where I’m going until I’ve been there a week or two!

Thought For The Day – Every time you remove something negative from your life, you make room for something positive.

9 Responses to “Roll Those Wheels!”