It sure is nicer here in the White Mountains, where daytime temperatures are in the upper 70s and overnight lows in the mid-40s than down in the desert, where it’s over 100 degrees. What a difference an extra 4500 feet in elevation makes!

We spent yesterday morning relaxing after the difficult day before, reading e-mail and blogs, making a couple of phone calls, and filling some orders that came in with our last mail.

Then in the early afternoon we drove to Pinetop-Lakeside to visit with my friend Lyle Worman at Pinetop Sporting Goods for a while, and then to Pinetop Book Exchange to spend some time with Jim Lewis and his wife Shar. The characters who own the book store and gun shop in my new Big Lake Blizzard

may be loosely based upon these two guys, who’ve been like brothers to me for over 25 years. Jim is also a part time bone cruncher and he gave Terry and I both adjustments that alleviated our back aches.

A little after 5:30 we went to dinner with Jim and Shar at Lotus Garden, an excellent Chinese restaurant that we discovered when we visited our old hometown last year. About halfway through our meal my daughter Tiffany called to tell us she was in the Emergency Room with granddaughter Hailey, who had broken her arm. Ouch!

As soon as we finished eating we drove to the hospital to check in on Hailey and to help Tiffany by keeping an eye on her younger daughter, Destiny, age 6.

This was like a déjà vu experience; at age 10, Hailey is definitely not a girly girl and she usually has the scrapes and bumps to prove it. For as long as she could walk she has been climbing trees or bringing us handfuls of bugs to admire that she caught. While we were here in April, 2010, Hailey and her sister were wrestling and goofing off and Hailey fell and broke both bones in her left arm. And that was the second time! The first time she fell out of a tree. This time around she was riding her bike and crashed, breaking both bones in her right arm. I guess she has grown bored breaking the left one!

If I had suffered an injury like that, you’d be able to hear me whining all the way to Paducah. Heck, I need Novocain for a haircut! But not Hailey. She’s a tough little girl. We were in the ER with her for a couple of hours and she was laughing and joking around all the time. When the nurse came in to give her a shot and start an IV because they would have to put her under to set the bones, she never winced. 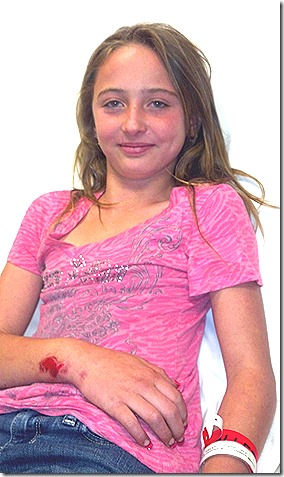 Tiffany’s husband Scott works at a copper mine in Morenci, Arizona, about 175 miles away over very twisty mountain roads, but he made it to Show Low in about three hours. Once he was there the staff shooed us out because they were going to set Hailey’s arm, so Terry and I came on home. An hour or so later Tiffany called to say they were done and headed home. Hopefully Hailey won’t break anything else while we’re here.

Thought For The Day – One of the best ways to stay happy is to walk away from the things that make you sad.

7 Responses to “A Tough Little Girl”