It’s April already. Where in the heck does the time go? I guess it’s true what the say, life is like a roll of toilet paper – the closer you get to the end, the faster it goes. Somebody put on the brakes!

Yesterday I noticed that the jets from Luke Air Force Base had been playing and I took a picture of this giant X they had made in the sky. I bet those fighters make our motorhome seem like a fuel efficient vehicle. 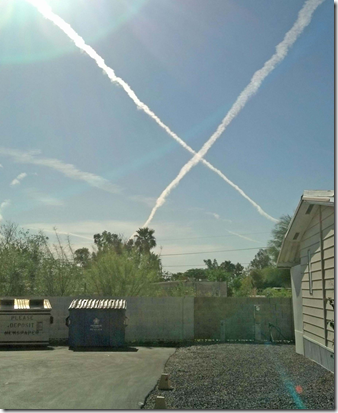 I spent a few hours working on the new issue of the Gypsy Journal, getting a good start on it. Then about 3 p.m. Greg and Jan called to say that they had arrived at Countryside RV Resort in Apache Junction, just a few miles from us. We drove over to pick them up and went to dinner at JM Chinese Restaurant, a great little place we discovered a couple of weeks ago. It sure was good to see them again, and we were all talking at once for the first half hour or so.

After we finished eating we went by Terry’s mom and dad’s place to introduce our friends to them, and had a very nice visit. After an hour or so it was time to get Greg and Jan back to their rig so we could get home ourselves, since Terry has to be up early today.

About 10 p.m. I got an e-mail from my pal Chris Yust, with the final proofed copy of my newest book, Big Lake Blizzard. I’m thrilled! I’ll spend today making the changes Chris suggested and then begin formatting it so I can get it uploaded to Amazon. I called Chris to thank her for all of her work, and she said she really liked the book and that the ending caught her by surprise.

I originally said I’d have the book out by Christmas and then ran into a series of delays that disappointed some readers who were anxiously awaiting the new book. The lesson I learned from that is that in the future I won’t announce a release date for a book until it’s ready to go. I appreciate everybody’s patience.

Today Terry’s dad has a consultation with his surgeon at Mayo and a couple of other medical appointments, so she is leaving a little before 7 a.m. to be with him and her mom. I offered to go along, but they said I’d only be underfoot, so just stay home and get that book finished! Please keep those prayers coming folks. We need them.

Thought For The Day – Just because it’s a bad idea doesn’t mean it won’t be a lot of fun.

3 Responses to “X Marks The Spot”