Since we were moving less than six miles yesterday, we figured it would be an easy morning. Yeah, right, like that’s going to happen!

I did my usual walk around the motorhome that I do every day when we’re traveling. Even though it was a short drive, it’s always a good idea, to be sure you don’t have a low tire, anything leaking, or that your ladder didn’t fall off the back of the rig.

As it turns our, the ladder was still there, with Terry’s Trek bicycle hanging from it, but we had an addition. As I walked around the back corner of the Winnebago, a dove flew off this nest it was building on the ladder. This is the second time we’ve had this happen. The first time, at the Escapees North Ranch campground in Congress, Arizona several years ago,  there were two eggs in the next and we carefully moved it hoping not to disturb things too much. This time the bird was in the early stage of construction and there were no eggs, so all we did was set back her location and timetable. 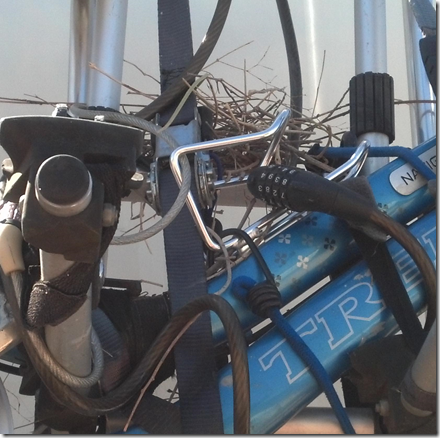 This was our third or fourth year to stay at Patio Gardens, but I’m not sure we’ll return again. Every year there is a new manager and things change. This time around, our electric bill for a month was $101. That’s more than Terry’s folks pay at their house a few blocks away this time of year! We’ve been very careful not to use our air conditioning except for a couple of hours during the hottest part of the day, depending on our awnings and roof vent fans to keep us halfway comfortable.

When we got to Countryside RV Resort, we stopped at the office to register then drove to our site and got backed in. I always check the electric before I put down my jacks and extend out slideouts, because more than once I’ve done all of that only to find a problem with the power. Things looked good, but once we were plugged in, leveled up, and the slides were out, I noticed that our Electrical Management System (EMS) said we had 125 volts on one leg of our incoming power, but only 86 on the other. What the…?

I called the office and they sent the maintenance man right over, who fiddled with things a while and decided we needed to move to another site. Now, this place has 500+ sites and the majority are empty this time of year. I asked if we could move a couple of streets over to where Greg and Jan are parked, where there are lots of empty sites, but the office said no and had us move a few sites down from where we were.

Before we moved, Dale, the maintenance man, checked the power pedestal at that site and it showed 125 volts on both legs. This time I didn’t mess with the jacks until I was plugged in, and sure enough, the minute there was a load on the circuit, one leg dropped down to the high 80s and the EMS blocked it to protect our electrical components. So I called for Dale again.

He said this happens sometimes, especially with coaches with sophisticated EMS systems, so I rode up to the office with him and asked again about moving to the street Greg and Jan are on. Dale said he knew the power was good there, but for whatever reasons they have, the ladies in the office instead had us move to a third site, near the front of the RV park. The power showed good on both legs, I plugged in and had a solid 121 volts on both legs. But the EMS showed an open ground. Hey Dale, come back!

By now I was feeling like Goldilocks searching for the RV site that was just right. Or that could accommodate us, at least. I made up my mind that if they wouldn’t move us to Greg’s street I was just going to get my money back and leave, but Dale installed a new ground wire in the power pedestal and we were finally good to go. And only 90 minutes after we arrived!

While we were dealing with all of that, the Apple store called to say that my iMac was repaired and ready to pick up. So after we got the motorhome parked and set up we went to get it. After the hassles I’ve had in the past, I’ll admit that I wasn’t optimistic, but the folks at the Apple store at SanTan Village were very friendly and they seem to have fixed the computer. In fact, one of their employees even carried it out to the Explorer for us. Now that’s customer service!

We have wanted to take Greg and Jan to Organ Stop Pizza in Mesa and yesterday seemed like a good day for it. This is a neat place; they have a massive Wurlitzer pipe organ that was built for the Denver Theatre and installed in 1927. Unfortunately, the photos I was able to get on my cell phone don’t do it justice. 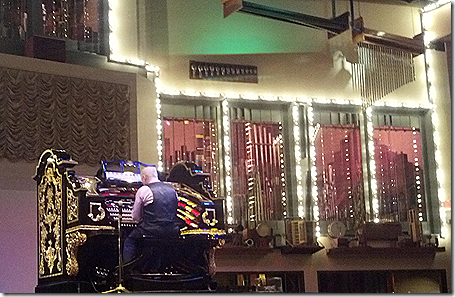 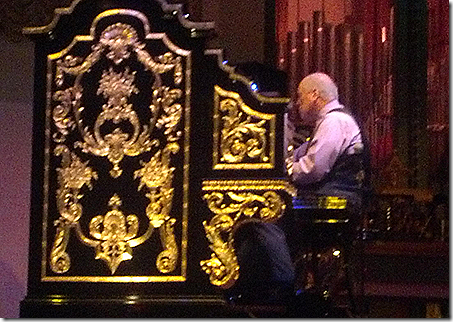 At show time, the organ rises from a pit in the floor, and a top rated musician performs an amazing variety of songs, everything from Phantom of the Opera to Scott Joplin’s The Entertainer to the theme from the Pink Panther. And this isn’t your grandma’s church organ! Check out the specifications of this amazing machine. And to top it all off, the pizza was pretty good too!

Thought For The Day – Sometimes, the best way you can get someone’s attention is to stop giving them yours.