It’s getting way too hot here in Apache Junction for this kid. It was in the mid-90s yesterday and starting Monday we’re looking at triple digit temperatures for the next five days. I really want to be out of here. Unfortunately, while we will be leaving Wednesday morning, we’re headed for Tucson for at least a couple of weeks for medical appointments.

The temperatures aren’t the only things heating up. As I wrote in yesterday’s blog, the plug that connects our power cord to the motorhome had a bad connection and we planned to try to fix it yesterday. But before we could do that, we lost power again. I called Greg and when we disconnected the plug and pulled back the yellow rubber shield around it, this is what we found. It had gotten so hot it had burned completely through in two places! That could have been really nasty. 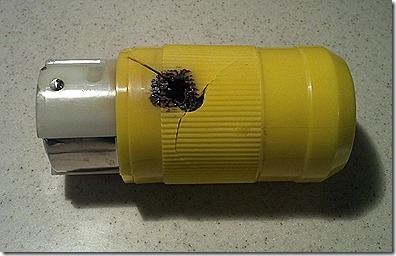 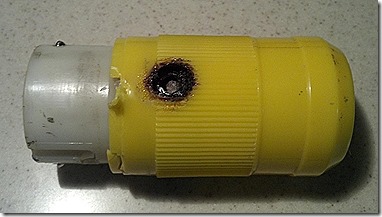 We tried to find a replacement plug at Home Depot with no success, and it being Saturday afternoon, the first two RV parts stores we checked were closed. So we drove to Camping World and bought the plug. Those babies aren’t cheap! Even with Greg’s President’s Club discount, it was over $80!

Back at home, Greg replaced the plug and got power flowing into the motorhome again. It sure was good to hear that basement air conditioner come on! Thanks Buddy, I owe you (again).

Some folks would say I take advantage of Greg’s good will and technical skills, but he doesn’t see it that way. He says that when he’s fixing stuff on my Winnebago, he’s actually learning how to do a job so that if the same things breaks on his American Eagle, he’ll know what to do. And as long as he thinks that, I’m not telling him otherwise!

As if things weren’t hot enough between the temperature and our power plug, once the repair job was finished we spotted this plume of smoke between our RV park and the freeway. The flames were pretty high for a while but soon police and a fire truck responded. We’re not sure what was burning and later when we drove by the scene, all we could see was a burned greasewood tree. Whatever it was had been hauled away or wasn’t big enough to see from the highway. Greg speculated that maybe somebody set fire to some old tires, with all the black smoke we saw. 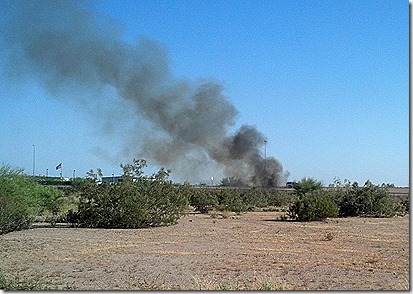 Today we plan to do some sightseeing, introducing Greg and Jan to the Apache Trail, a beautiful drive though the foothills of the Superstition Mountains past Canyon Lake to Tortilla Flat. That is, assuming I don’t break something else before it’s time to leave.

Thought For The Day – Hard work pays off in the future, laziness pays off now.