Nick's Blog » Get Off The Road!

I got an e-mail yesterday from a new RVer who was really rattled after an experience he had on Interstate 40 in northern Arizona a couple of days ago. He told me they were on their way to Las Vegas in their new Class A motorhome and encountered very strong winds east of Holbrook.

The further west they traveled the worse it became and that by the time they reached Flagstaff and got past the worst of the wind, he was terrified and could hardly pry his fingers off the steering wheel. They found the closest RV park and got off the road. Having experienced just how terrible the winds can be on that stretch of highway, I knew exactly what he had gone through. A couple of years ago we got caught in a sandstorm in that same area. In fact, earlier this week several miles of the highway were closed because of the wind, something that happens frequently up there.

While any rookie RVer can get themselves into trouble like that if they’re not careful, as well as a lot of veterans with years behind the wheel, I was particularly struck by something else the gentleman said. They were caravanning with his sister and brother-in-law, who have been fulltimers for several years, while this was only his second trip in his motorhome. He said as they left Holbrook and the wind started getting bad, he asked on the CB if they shouldn’t consider getting off the road, but his in-law told him it was going to be fine and to keep driving. He added that by the time they got to Winslow, another 25 miles or so further west, it was getting really bad and he asked again about getting off the road and waiting the storm out at one of the truck stops there, but again the brother-in-law insisted that they keep going.

I wrote back and told him to always err on the side of caution, and to never again let somebody else make his decisions for him. That brother-in-law isn’t going to pay for a new motorhome if he wrecks his pushing his luck at someone else’s insistence. If you’re not comfortable, get off the road at the nearest exit! Nobody ever got killed by being too careful in a situation like that.

Terry’s son Casey is visiting town with his wife Leslie and their eleven month old daughter Jane, so Terry spent most of yesterday at her parents house helping to prepare a family dinner and getting to know her new granddaughter. And isn’t she a cutie? 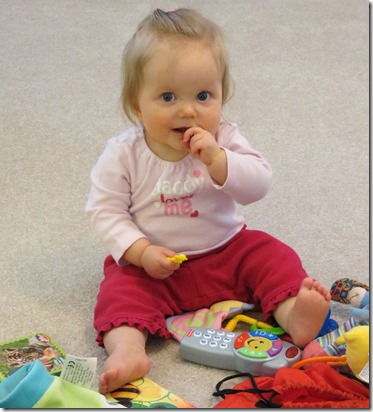 Here is a picture of Leslie, Jane, and Casey together. What a happy little family they are! 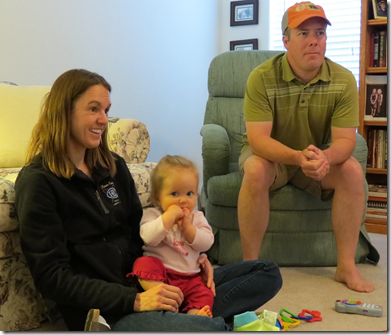 While Terry was busy cooking her signature Mexican dinner, I ran some errands and then came home to get some writing done until it was time to go back to her parents’ place. Before I had to put my current book aside to work on the new issue of the Gypsy Journal I had been making a lot of progress, and I was worried that I would lose my momentum in the two weeks I was away from the new book. But I was able to jump right back into the story and picked up right where I left off. By the time I knocked off I had another 4,000 words done.

Speaking of books, my good friend Al Hesselbart, historian for the RV Museum in Elkhart, Indiana has made his book The Dumb Things Sold…Just like that

chronicling the history of the RV industry available as an e-book on Amazon. It’s an interesting and fun read, and anybody who has an RV should get themselves a copy just to see where today’s motorhomes, travel trailers, and fifth wheels got their start.

Another interesting author is my friend Alison Blake, who “started writing as soon as she could pick up a crayon” and hasn’t stopped yet. Check out Alison’s interview on my self-publishing blog.

4 Responses to “Get Off The Road!”