Nick's Blog » Busy As A Bee

I was busy as a bee yesterday, probably because my honey was gone and I needed to keep busy.

Terry’s parents picked her up at 6:45 a.m. and she spent most of the day with them running around to several medical appointments. She got home mid-afternoon with the news that her dad’s surgery will be Friday. Terry said she was impressed with the doctor, who gave them all a lot of confidence in a good result. A lot of time this week will be spent with pre-op tests and appointments.

Our bed is too empty without Terry there, so I got up about 8 a.m., checked my e-mail, then got to work making the final changes to my new book, Big Lake Blizzard

and getting it formatted for Amazon’s Kindle bookstore. The team of Miss Terry and Chris Yust did an outstanding job proofreading and editing and I’m excited to see what the readers think of it. Thanks Terry and Chris, I appreciate all of your hard work. 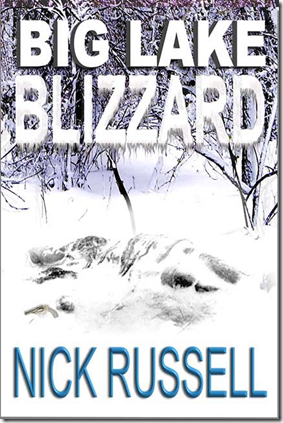 I uploaded it to Amazon about 2:30, and while they said it could take as much as 24 hours to go live, it was only about five hours later that I started getting e-mails and Facebook messages from fans who had already bought it. In fact, Amazon still showed it as “in production” when I logged on to check its status by the time a dozen or more readers said they had bought it. You can order Big Lake Blizzard

I will be formatting the book for the Nook e-book reader and uploading it to Smashwords in the next few days. I’ll probably wait until I get the new issue of the paper out before I format it for a print edition.

For a while now I have been toying with the idea of having my novels formatted as audio books and after I uploaded the new book to Amazon I logged onto Audible.com, an Amazon subsidiary, and submitted the first book in the series, Big Lake.

Now it’s a waiting game to see if any of their narrators are interested in sending me an audition.

With all of that behind me, I worked on the new issue of the Gypsy Journal for a while. It’s going to be a very full issue.

About the time Terry got home, Greg White called to say he wasn’t feeling all that great and didn’t think they wanted to get together for dinner. That was just as well, because Terry hadn’t gotten much sleep and was pretty wiped out. In fact, an hour or so after she got home she laid down for a while, something she almost never does during the day.

I’m not sure what’s on the agenda for today. It will depend on what Terry’s parents need and how Greg’s feeling. We may do some running around, or we may stay home and I’ll get more work done. Either way, it’s all good.

Thought For The Day – The ladder to success always runs uphill.

5 Responses to “Busy As A Bee”