We were up early again yesterday morning because we had a lot to do and a lot of miles to cover by the end of the day.

25 miles east of Dothan, Alabama is Fort Rucker, where generations of Army aviators have been trained. Back in my Army days when I was training cadets at West Point I was at Fort Rucker two or three times for short training assignments limited to a couple of weeks at a time, and I was looking forward to getting back.

We left the motorhome at the Dothan Elks lodge and drove to the fort to tour the United States Army Aviation Museum. The museum has one of the largest collections of Army helicopters, airplanes and unmanned aircraft in the country. 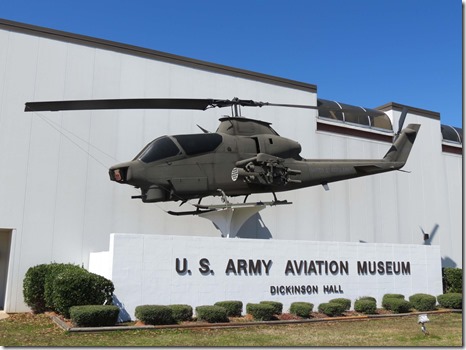 I love helicopters, and this one greets visitors to the base. 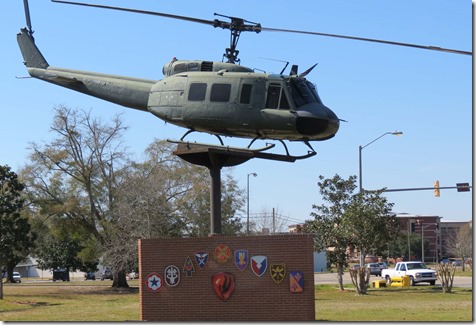 Something else I love is what I call the small world syndrome, where I run into somebody I never met before, but there is a connection I never would have expected. It’s happened to me many times in my life, and it did again yesterday.

When we entered the museum a volunteer greeted us and introduced himself as Conrad Chesser. We told Conrad about the Gypsy Journal and chatted for a few minutes, and he mentioned that he was a retired Army helicopter pilot. As old soldiers sometimes do, we got to exchanging stories, and it turns out that Conrad did two tours in Vietnam with the 1st Cavalry Division, which was also my unit. But what was amazing was that we were both also with the 17th Assault Group. I’ve met a lot of guys who were in the Cav over the years, but Conrad is the first one I’ve ever met from the 17th! Conrad left Vietnam just a couple of months before I arrived, but I’m sure we knew some of the same people and even flew in some of the same aircraft. Small world. Here I am with my new friend Conrad. 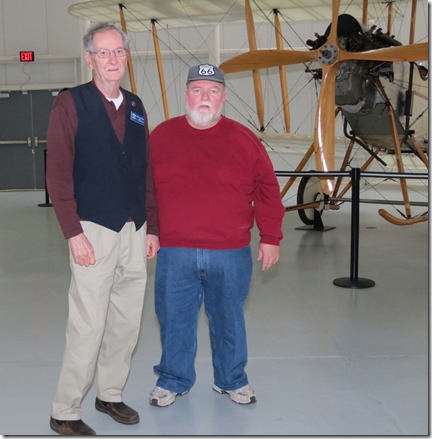 We had a very nice visit with Conrad and he gave us a very nice tour. The museum has an amazing collection and I’ll have a feature on it in a future edition of the paper. 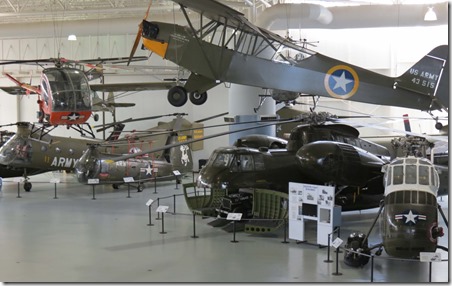 One of the really neat things about our job is that we get a lot of opportunities other folks don’t. Once when we were on the Mississippi Gulf Coast we got a private behind the scenes tour of Beauvoir, the last home of Jefferson Davis. A couple of years ago when we toured the Evergreen Aviation & Space Museum in McMinnville, Oregon, and Larry Wood, the museum’s Executive Director, gave us a personally guided tour of the Spruce Goose, the gigantic experimental airplane designed and built by Howard Hughes, and showed us parts of the airplane the general public never gets to see. Terry got another such opportunity yesterday, when Conrad invited her to sit in the Presidential seat of this Sikorsky CH-34, the first helicopter assigned to the White House and used by President Dwight D. Eisenhower. How cool is that? 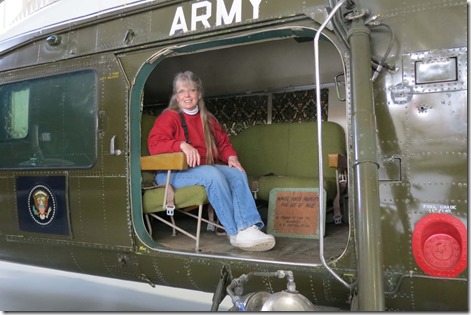 We had a great time at the museum and meeting Conrad was a special treat, but we still had a lot of miles to cover. We drove back to Dothan, hooked up the Explorer to our tow bar, and hit the road.

Agriculture is the main industry in the Dothan area and peanuts are a major crop. Every November the National Peanut Festival draws thousand of people to town. Peanuts are so important to Dothan that they even have statues of peanut characters all over town. 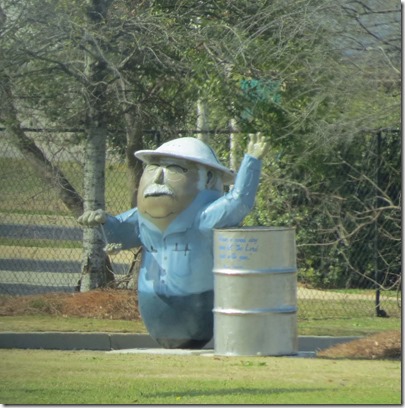 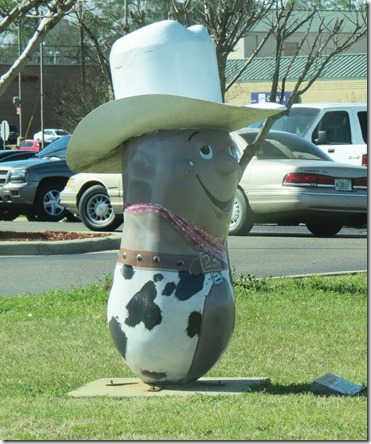 From Dothan we drove 95 miles north on U.S. Highway 231, a decent road except for a lot of truck traffic that made for slow going. At Montgomery we got on Interstate 65 for a few miles, then took U.S. Highway 82 northwest 90 miles to Tuscaloosa. The first 60 miles was rather narrow two lane road through very hilly terrain, and before we knew it darkness was closing in.

We usually try to be off the road before dark, but this was one of those times when we goofed and found ourselves still on the road too late in the day. My night vision is bad, so about 60 miles from Tuscaloosa Miss Terry took the wheel and drove the rest of the way. By the time we got to the Elks lodge, about 7:30 p.m. we were both more than happy to get parked and shut it down.

The Elks has a dozen or so level back in sites on gravel with 30 and 50 amp electric and water. Once we were parked and hooked up, my son Travis and his wife Geli came over to see us and then, since none of us had eaten, we went out for dinner. Back at the motorhome we visited for an hour or so, then they went home and I got the blog written so we could get to bed and recover from a very long day.

Thought For The Day – If my body is a temple, can I declare myself tax exempt?