I’ve never used drugs, and I haven’t smoked a cigarette or drank anything stronger than Pepsi in nearly 40 years, but I’m going through withdrawals right now. Sunday night our Dish Network receiver died and I can’t watch TV.

Now, I know a lot of folks who could give a darn about TV, and some that don’t even own one. That’s okay for them, but I like my TV and I won’t apologize for it. I’m a news hound, and I have a few shows I watch every week.

I called Dish and gave them the error message we were getting on the screen and they said it was a known issue and would send out a new receiver. I got an e-mail last night that it is on the way, with delivery by UPS on Wednesday. Meanwhile, I tried using our crank up batwing antenna to catch the local news, and it won’t work. I turn the handle about three times and it locks up. We seldom use it, but I’d like it to work when I do. A while back, we were visiting with our friends Bob and Molly Pinner up in Virginia, and Bob had a Jack digital antenna with a SureLock signal finder that replaces the old style crank up batwing. I just may have to order one of them. Greg White needs something to do when we get together in a few weeks. Do any of you have any experience with the Jack antennas?

I spent most of yesterday writing and got two more chapters done in my new book. During the afternoon our friend Chris Guld from Geeks on Tour came over and spent a couple of hours helping us with some computer and software issues. Thanks for all of your help, Chris!

After Chris left, we drove a few miles south to Diromio’s Pizza for dinner. This was our first time to eat at the small Italian restaurant on U.S. 27 this year, and it was just as good as it always has been in the past. Back at home, I fooled around with the rooftop antenna a while longer, hoping to get a signal, and finally gave up in frustration and went back to writing.

The other day we spotted a Class A motorhome here at the Orlando Thousand Trails with this full body wrap from Ancestry.com, the family search website. Nobody was home, but I’d like to talk to the owners if I can catch them before we leave next week. 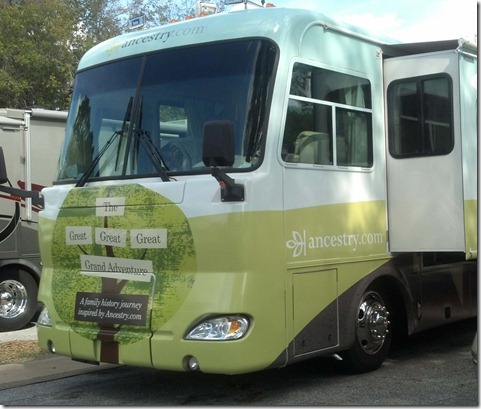 We’ve seen several RVs with advertising wraps like this, and the RVers and campground owners we’ve talked to about the practice seem divided between those who don’t want rolling billboards parked in the site next to them, and those who don’t care. What do you think about it? Personally, if anybody has a Hooters wrap on their RV, feel free to park next to me anytime, anywhere.

Thought For The Day – Even duct tape can’t fix stupid. But at least it can muffle the sound.

15 Responses to “Going Through Withdrawals”