Nick's Blog » The Blue And Gray

The Civil War may seem like ancient history to some, but the reality is that it happened right here in America, and unless your family immigrated here in the last 148 years or so, they were most likely directly impacted by the war. They may well have had a father, brother, or son who served on one side or the other.

My friend Norah Glover has an interesting blog post about her genealogy research into her Civil War ancestors that’s a good reminder that the War Between the States isn’t that far removed from many of us today. Maybe all of our ancestors were not as impacted as the Louisiana branch of Norah’s family, but just about everyone living in America at the time felt the war in one way or another.

The RV lifestyle is perfect for genealogists. It has allowed me to research my family tree from Arizona to Ohio and everywhere in between. With a good internet connection, I can log onto Ancestry.com or one of the other family search websites and do my research wherever we happen to be, and then go to the places where my ancestors lived and died.

I didn’t know that my great grandfather, John Sanders Stephens, served in the Union Navy until we visited his grave in Covington, Kentucky and saw his headstone. While a lot of men served in the Army, a much smaller number were in the Navy. 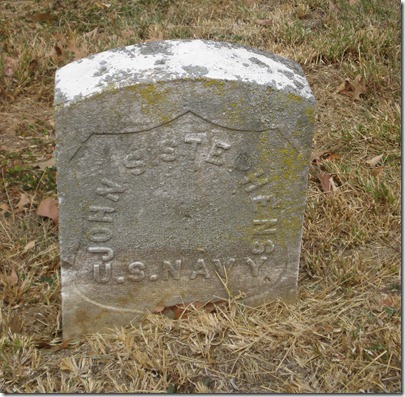 My father was 45 when I was born, and my mother was 40. I can remember my father telling me about visiting his maternal grandfather, John Stephens, and that he worked on river barges and cargo boats. Through my genealogy research, I know that he lived most of his life in Ludlow, Kentucky, across the Ohio River from Cincinnati, and I strongly suspect that he may not have actually gone to sea, but was instead a "brown water" sailor, since during the Civil War the rivers were an important part of the transportation system, and protecting them and moving troops and cargo was vital to the war effort.

I know less about my dad’s paternal grandfather, Richard G. Russell. My research has shown that he served in the Union Army in the 137th and 39th Ohio Infantry, but have run into several brick walls because there were at least two men with the same name living in Cincinnati, Ohio in the same time period. But I keep poking at the wall, and one of these days I’ll dislodge a brick or two and get a peek into the other side.

Are you an RVing genealogist? You’re not alone, we have met many folks doing family research on the road, and the Escapees RV Club has a special genealogy group called SKP Genies. Check them out. We had several genealogy seminars at our Gypsy Journal rallies, and other RV events have genealogy workshops and seminars.

Today I posted the second of my indie author interviews to my self-publishing blog, with my good friend Mike Meyer, author of such excellent books as Covert Dreams, Deadly Eyes, The Famous Union, and The Survival Of Marvin Baines. Check out Mike’s interview.

Thought For The Day – Your life’s journey will be much lighter and easier if you don’t carry your past with you.

5 Responses to “The Blue And Gray”