We checked our e-mail, I responded to several that needed immediate attention, then we started getting ready to leave. By the time we had pulled out of our campsite, stopped to hook our Explorer to our tow bar, done our light and brake check, and dropped off our parking permit at the campground office, it was 10 AM when we actually left.

In the past we have taken State Route 44 to Leesburg and picked up US Highway 27 there. Leesburg is a small town, but that route has several traffic lights and stop signs along the way, and a construction zone. This trip we took the turnpike from Wildwood to US Highway 27 south of Leesburg, which only shaved about five miles off the trip, but saved us quite a bit of time and stop and go driving. The $4.50 toll for our Winnebago and toad was worth it.

I wrote in yesterday’s blog that the Thousand Trails has had lots of available sites this winter, but I take that back. It was that way when we were here three weeks ago, but not when we arrived yesterday. I’ve never seen it this crowded in the three winters we’ve been here. They only had twelve sites available when we pulled in. That is twelve empty sites total, out of over 800! And while we were checking in, a non-member came in to inquire about a site and they were willing to rent one to him. That makes a dues-paying member feel good.

Fortunately, there were two 50 amp sites left, and we snagged a paved level back in FHU site with a picnic table. Better yet, there is an RV site on one side of us but the other side is just open ground. And we are backed up to the forest, so there’s nobody behind us. When we were here the last time, there was maybe two feet between the back of our motorhome and the one behind us. And our site is even nice and level! By 11:45 we were parked and hooked up, an easy traveling day of just 44 miles.

With that done, I decided that I really deserved a nap, so I took one. Life must have its little rewards.

Miss Terry deserved a reward too, so later on we went to San Jose’s Original Mexican Restaurant, her favorite eatery in this area. We haven’t had a bad meal there yet. I chose my regular shrimp enchiladas, and Terry ordered pork tamales and a chili relleno. Everything was excellent.

When we came back to the Thousand Trails, we stopped at the campground’s fishing pier and boat launch on Lake Hancock. This is a great paddling lake and we’ve had our Sea Eagle kayaks on it several times. Hopefully we’ll get out again while we’re here. The lake has some big bass and yes, a few alligators, too. But then again, just about anything larger than a birdbath in Florida has at least one resident alligator. I’ve never heard of a kayaker being molested by one though, and we plan to keep it that way. 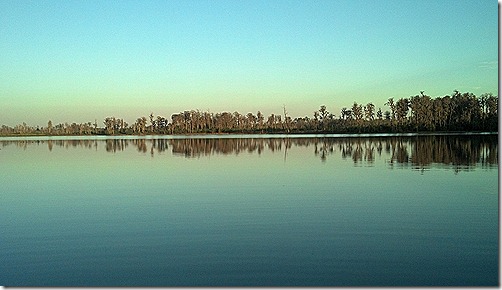 It was late in the day and the bass were jumping, chasing some small fingerlings for dinner. I took a couple of pictures with my Droid, but it was getting chilly and before long we retreated to the comfort of our motorhome. Hopefully it will warm back up by the end of the week. 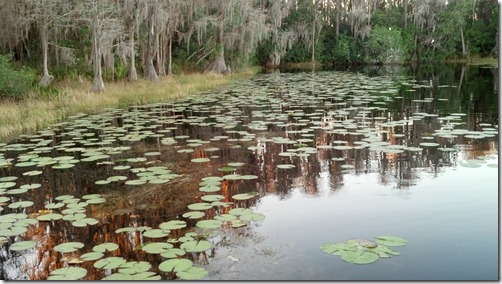 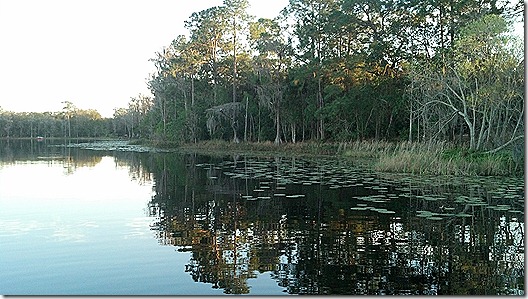 Before I close for today, I want to share something with you. If you ever worry about the future of this country, take a minute to watch this news story about three high school seniors and their act of love for a classmate growing up with a disability. The three were nominated for homecoming king, but all agreed that whoever won, they were going to relinquish the crown to a popular classmate who has not allowed his challenges to keep him down. I’m not ashamed to say it brought tears to my eyes when I watched this news video, and I think it will some of you too.

Thought For The Day – The only person you should try to be better than is the person you were yesterday.