Now, call me a grouchy old fart if you will, but I’ve always believed that my rights stop where yours begin, and vice versa. So I was a bit perturbed at 8:30 yesterday morning when the fellow across from us here in the campground decided to entertain everybody with a concert of hymns and Christmas music, played very loud on his amplified keyboard while sitting outside. I’m talking loud enough to interfere with us inside our motorhome with all of the windows closed.

I like music. Though I don’t attend a church, I like many of the hymns I grew up listening to. I even like Christmas music. But I prefer to choose when and where I listen to it, and at what volume. I’d have been just as offended if it were country western music, or jazz, or Jimmy Buffett. (Well, okay, Jimmy Buffett would probably be okay.

) What ever happened to common courtesy?

I don’t know how she does it, but once Terry gets into her envelope stuffing mode there’s no stopping her. She makes the Energizer Bunny look like a snail.

Here is the back of our Explorer with just a few of the bins of envelopes she been filling the last few days. There’s barely room for us to get inside. Today we’ll drop some of these off at the post office and the rest at the commercial mail service in Orlando. Then we’ll take boxes filled with even more to UPS to ship off to different mail forwarding services that our fulltime RVer subscribers use. 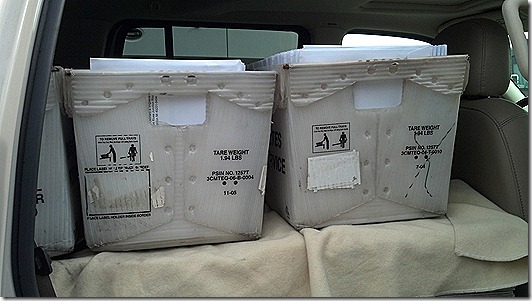 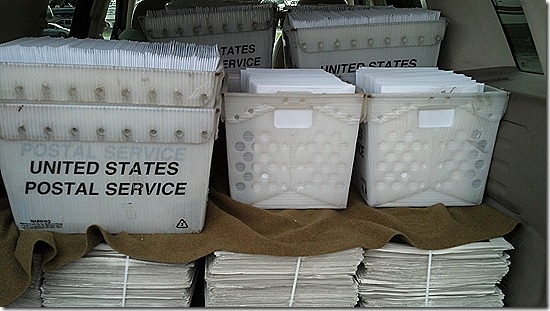 Eventually we’ll reach a point where we may be able to see the back end of the Explorer again. I think it has another seat that’s folded down back there somewhere.

Yesterday I mentioned that a subscriber to our digital edition suggested that, instead of uploading the digital issue to our website and then sending our subscribers a link to access it, I just send the PDF out as an attachment, and asked for feedback. Based upon the blog comments and the many e-mails I received in response, it’s not a good idea. A number of readers said they have limitations on the size of e-mail attachments they can receive, or that they have very slow connections, and/or limited data plans. So we’ll just keep doing it the way we have been. I appreciate you sharing your input with me.

We spend several weeks here at the Orlando Thousand Trails preserve every winter, and the one drawback for us has been the lack of a good Chinese restaurant in the area. But that was before we discovered a very nice little family-run place called Green Garden yesterday. Tucked away on the side of a strip mall in Clermont, it’s a quiet little place where you are greeted as a friend the first time you walk through the door.

The food was superb, I had the house fried rice, which was loaded with shrimp, pork, and chicken. Terry ordered the garlic shrimp, with hot and sour soup. Everything was served quickly and our waitress was very attentive. We’ll definitely make this a regular stop! 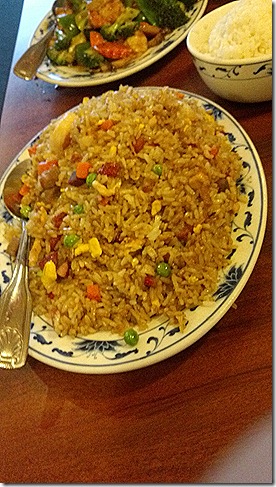 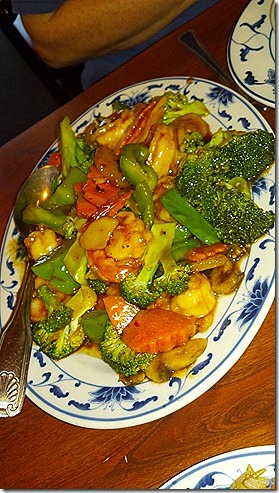 Before I close for today, I want to thank the many readers who contacted me when I reported that our printer had done a poor job on the new issue of the paper, letting me know that as long as they can read it, they’re happy. I appreciate it. Terry and I take a lot of pride in the Gypsy Journal and we want to give all of you the very best publication we can, each and every issue. You deserve no less. I’ll be having a telephone conference with our printer up in Michigan. We can’t change things this time around, but I’m damn sure going to let them know this is unacceptable and they need to do a lot better in the future.

Thought For The Day – If you don’t want a sarcastic answer, don’t ask a stupid question.